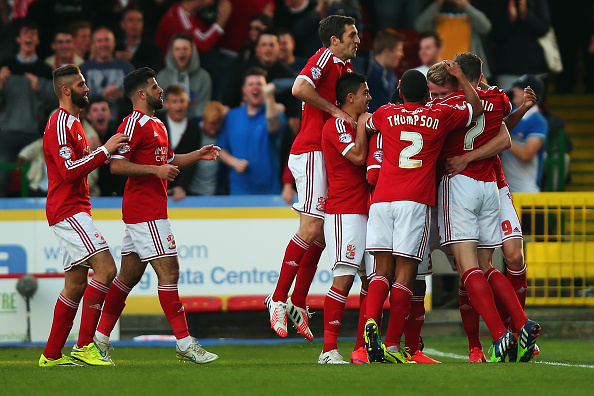 We’ve seen plenty of teams trying to control or restrict media access in North American sports over the years, with the Chicago Bears’ training camp restrictions  just the latest story on that front, but things may be even worse in England. As discussed around the Marshawn Lynch flap  at last year’s Super Bowl, the English Premier League’s media restrictions tend to be much stricter than anything seen in North America, with reporters generally not allowed to cover practices or enter locker rooms. Those big clubs aren’t even the most draconian ones, though. Sam Borden of The New York Times has a great story on third-division Swindon Town, a club that’s effectively eliminated all non-game day access and even stopped reporters from covering charity events:

A few months ago, a reporter for the local newspaper here went to a charity event in town. The manager of Swindon Town F.C., the city’s professional soccer club, was appearing at the function, and the reporter planned to write it up. Some handshakes, some smiles, a quick word between the writer and the manager, and a nice picture in the next day’s paper: It was the sort of thing that happened in small towns everywhere.

But when the reporter approached the coach, Mark Cooper, a team official said there would be no interview. And when a photographer from the paper, The Swindon Advertiser, stepped in with a camera, team officials shut down the picture, too. The journalists had no choice but to leave empty-handed.

“A story about a charity event — a charity event!” Gary Lawrence, the editor of a group of local papers that includes The Advertiser, said recently. “Can you imagine?”

…Late last month, Swindon Town, a third-division club that typically plays in front of crowds of fewer than 10,000, formally enacted some of the most extreme measures yet: In effect, the team has eliminated non-game-day news media access. Reporters, photographers and videographers are largely barred from interviewing any member of the team, the coaching staff or the club’s management, save for a hurried question or two for the manager at a postmatch news conference.

As discussed above, this is less of a deviation from the norm in England than it would be in North America, but Swindon Town’s policies are even stricter than those of much larger clubs. On some levels, though, that isn’t surprising. Many of the worst cases of access denial we’ve seen in North America have come from the university level, where there aren’t as many league-wide policies to ensure access, and they’ve sometimes involved lesser-known universities. Those lesser-known schools in particular bear similarities to the case of Swindon Town; they’re frequently only covered by a couple of outlets, so there’s perhaps more desire to spin how those outlets do their job, and there are less other outlets to raise an outcry when the team leans on the media. It’s also much easier to go to war against, say, The Swindon Advertiser or a student newspaper than it is to take on the likes of The New York Times.

Why do teams want to do this in the first place, though? In some ways, it’s a reaction to coverage they disagree with, but it’s also a reflection of the changing media landscape, where teams consider it more possible to get their own side of the story out there without the traditional media. Here’s what Swindon owner Lee Power told Borden:

Mr. Power added that he had been displeased by coverage of the club’s activities — including a court battle over its ownership — and did not deny that that had been a significant factor in his decision.

“The local paper and the football club haven’t seen eye-to-eye on a number of issues over the years,” he said. “As the owner, I didn’t think they were very supportive of the club, and I’m not here to sell newspapers; I’m here to do what I believe is best for the club.” …

Most European soccer clubs do at least one news conference ahead of each weekend’s match; Swindon Town will not. Most soccer clubs have a big media day near the end of the preseason so that various outlets can put together preview packages; Swindon Town will not. According to a Swindon Town club statement, the vast majority of access to the team outside of the coach’s league-mandated postmatch news conferences this season will be through “our in-house journalist,” who is also listed as the club’s press officer.

To fill the content void, Swindon Town articles, photographs and video will be published on a new app. That app, known as Fanzai, has so far proved polarizing; it is described by some early users who have posted reviews of it as “utter rubbish” and “like a poor man’s Twitter.”

Mr. Power said the club would still allow a reporter from the local BBC Radio affiliate to ask tactical questions of the manager ahead of matches, “which means the difficult issues will still be covered.” But Tom Bassam, who covers the team for The Swindon Advertiser, said, “They want to engineer the coverage that they want without any accountability.”

Perhaps even more than a reaction to poor coverage, that’s what’s really driving this, the belief that media outlets need the teams more than the team needs them. On some levels, that belief isn’t incorrect; in an internet age where they can push out their own content, and where fans can find information about the team (and not just favourable reports, but also information like player movements and schedules of upcoming games) without relying on the newspaper, teams are undoubtedly less reliant on old media to drive interest and boost ticket sales than they once were. Media outlets also unquestionably do need sports coverage to some extent; sports can be big for driving subscriptions, traffic, ad sales and much more. However, that doesn’t mean they always need full access, as there’s lots that can be done even without it (and coverage without standard access is sometimes better in an age where many athletes only utter useless, inoffensive quotes full of clichés). Moreover, there is still plenty of value for teams in coverage from outside media, and trying to restrict or alter that often backfires.

This story isn’t limited to Swindon Town or England, and it’s quite possible EPL clubs and perhaps North American teams could go as far as they have. What’s really going to determine the outcome of these access battles is how fans react. If fans are content to support teams’ in-house coverage and not protest about the treatment of outside media, media will probably wind up with less and less access going forward. That may motivate them to try some unconventional storytelling without access (as the Advertiser plans to), or it may motivate them to move away from sports coverage. If fans insist on being able to receive outside media coverage, though, that may motivate clubs to change course. Power thinks his club doesn’t need the media and can provide the same value to fans with in-house coverage. We’ll see if Swindon Town’s fans prove him right or not.