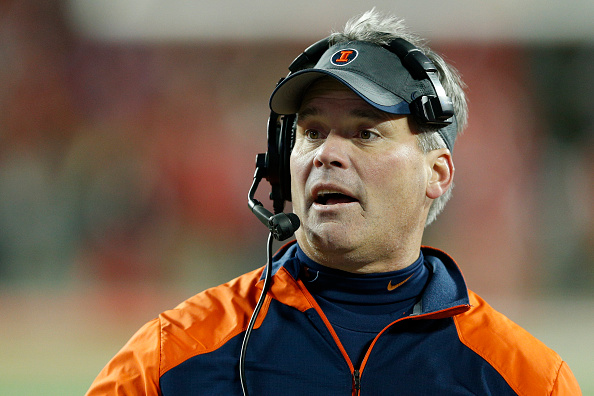 Coaches in general, and college coaches in particular, often seem to have a poor understanding of the role of the media, but Illinois football coach Tim Beckman seems to understand it even less than most. At his National Signing Day press conference Wednesday, Beckman told the media in attendance they need to be more positive about his program.

As relayed by Steve Greenberg of The Chicago Sun-Times:

Tim Beckman is challenging the media to be more positive about his program: "How important is the University of Illinois to you?"

More Beckman re: media, "Let’s build this thing into a championship. The more positive stuff you can talk about, the better off we all are."

Greenberg posted the full context on his blog (there’s also video), and it doesn’t redeem Beckman at all. Greenberg does a nice job of eviscerating Beckman for this stance, too:

Is it possible Beckman simply doesn’t understand the role of the media who cover a college football program? In short — not to insult anyone’s intelligence, because the rest of you surely understand it — it’s about gathering and disseminating information and offering analysis. Nowhere, not here, not anywhere, not ever, is it supposed to be about root-root-rooting for the home team. …

[H]e is so far off in asking the media to essentially cheerlead, it’s beyond comical. It’s also wayyyy wrong. He’s out of line and, it seems, doesn’t even know it.

That’s a big part of the problem here; Beckman doesn’t even seem to realize how out of line he is.

Beckman is a paltry 12-25 in three years in Champaign and 4-20 in the Big Ten, so it’s not like there’s a lot to be positive about in the first place. Even if the media saw their role as cheerleaders (which is a non-starter) it’s delusional to think they could get the pom poms out for a 5th place finish in their division and a bowl defeat to Louisiana Tech. Although by Beckman’s first two years at Illinois, maybe that is worth celebrating.

“The more positive stuff you can talk about, the better off we all are” is patently untrue. Media members are not on a college’s public-relations staff, and they shouldn’t be better off if they write nicer things about a coach. Of course, in practice they sometimes are, as many coaches only grant exclusives to those who talk them up, but that approach carries problems too; discerning readers can figure out who’s doing their job as a reporter or columnist and who’s just trying to get in a coach’s good books. The key point here is that Beckman’s completely misunderstanding the role of the media, though. They aren’t there to praise him, and if he does his job poorly, they’ll be doing their job by burying him.

Beckman’s far from the only college coach to have this idea, though, and that’s why his comments can’t just be laughed off. See former Michigan coach Brady Hoke, who barred the school’s student newspaper from a press conference because they criticized him. See current South Carolina coach Steve Spurrier, who pushed a newspaper’s publisher to ban a critical columnist from covering his team. College coaches have a lot of power, and many of them are seeking to extend it into how they’re portrayed in the media. That’s something that can’t just be overlooked; it needs to be pushed back against.

The role of an appropriately-critical media is perhaps becoming more important than ever, and it’s perhaps one of the few ways traditional media outlets can distinguish themselves in this era. In an era of large sports information departments and impressive team websites, there are places where plenty of positive spin will be provided. That’s not, nor should it ever be, the media’s job.

Journalistic independence and integrity, if done well, could be a strong selling point for mainstream media outlets. If they have no stake in a team’s success (which they shouldn’t), it can be easier to trust them. That doesn’t mean they should criticize just to criticize and to show how unbiased they are, as that’s unfair in the other direction (and this sometimes shows up as unnecessary criticism of those who aren’t particularly media-friendly, such as Nick Saban, Gregg Popovich or Marshawn Lynch).

It does mean that Beckman’s wrong that positive coverage of the Illini football program is beneficial for everyone. It’s beneficial for him, but for the media, being fair and critical are far more important.

UPDATE: Beckman also appeared on Boers & Bernstein in Chicago (audio here) and doubled down on the comments.  To the immense credit of the hosts, they did not give the Illinois coach a free pass.  Hearing the hosts try to explain the actual function of the media to a Division I football coach is a surreal experience.