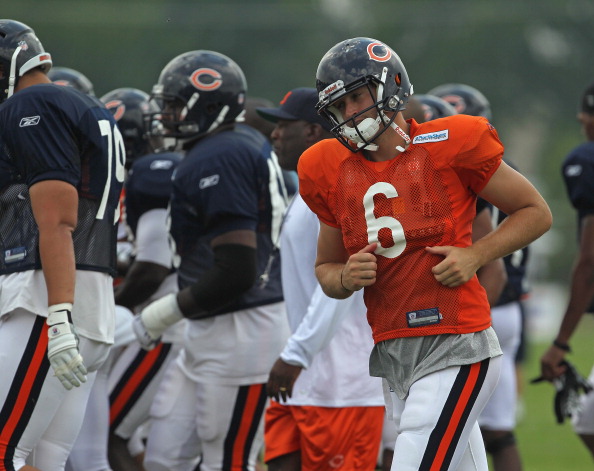 These are just a few of the words used to describe the new training camp media policy of the Chicago Bears.  In a step that increasingly sounds all too familiar around the sports world, the Bears are demanding that reporters not report from the team’s summer training camp in Bourbonnais, Illinois.  Instead, the team has put forth a series of strict guidelines to control what information comes from their training camp.

Details from our friend Ed Sherman, writing at the Chicago Tribune:

The new policies only affect the 15 days of training camp before the second exhibition. After that, normal regular-season regulations go into place.

Among the items from a list of training camp guidelines reporters received Wednesday upon arriving in Kankakee:

•Television stations and photographers won’t be allowed to shoot any video or photos during team drills. They can shoot stretching and individual position periods, but even then the Bears request the cameramen “shoot tight.”

•Reporters can’t blog or tweet any “team strategy or injury specifics” during practice. For instance, the guideline says, “No reporting of which players are practicing with individual units.”

•There will be no player availability off the field after practice, another departure from previous years. Reporters now have to put in a request for an interview.

How does it make sense for reporters not to tweet when any fan attending practice can?  How does it make sense for any person with a smart phone to be able to do more reporting than people whose actual job it is to do so?  Are the Bears actually wasting precious human resources and employing someone to monitor the Twitter feeds of reporters to make sure they don’t tweet something that goes against the rules?  Are they going to confiscate a reporter’s phone like a middle school teacher and give it back at the end of the day if they’ve been caught being naughty?

Chicago radio host Dan Bernstein had perhaps the best reaction to it, noting how much of a farce the new policy truly is:

A Bears spokesperson told the Tribune that the move was to prevent erroneous or out-of-context reporting, apparently not realizing that now the team is inviting more of that by putting the masses in charge.

What of a retweet of something noted or recorded by a fan just on the other side of the yellow rope, inches away? Is that kosher? Can a TV station pick up the video the moment it hits the public domain? Why not?

What’s even crazier is that any industrious editor or program director can have a reporter take a “day off” to join fans in the stands. Without the burden of a credential, he or she could actually report.

This doesn’t protect the paranoid Bears from any prying eyes working to discover their precious trade secrets (if they think opposing teams don’t already have scouts in the stands, they’re dreaming). And it doesn’t help their fans get reliable news in proper context.

It’s a bad, stupid policy that accomplishes nothing of value to anyone involved.

Take a step back and think about that – a reporter can take the day off, sit in the stands, and be better equipped to do their job at Bears training camp.

Apply this logic to your every day life.  Imagine you’re not allowed to use the copier in your office because only people who work outside your office can come in to use the copier.  The boss says it’s actually off limits to anyone who works there.  You would be left speechless.  The Bears might as well try to stop the wind from blowing than try to stop people tweeting about the team.

In practice, there is still some flow of information coming out of Bears training camp, it’s just been restricted by the new rules.  Some local media members have said it’s a blessing in disguise so that fans can be saved from breathless live tweeting of training camp drills (which actually is a decent argument) while others have had fun with mocking the Bears over it, like Steve Rosenbloom in the Chicago Tribune.

This is some kind of reboot, huh?

Quick, someone tell Ryan Pace this is a bad look for a general manager who came from the team that got popped for Bountygate and then slimed the (local football team name left blank per new media rules) with the Ray McDonald debacle.

The above paragraph is really going to be the issue moving forward for the Bears – it puts such a terrible strain on the team’s relationship with the media moving forward.  One would think with a new GM and a new coach in town, the Bears would want to build a better relationship with the media and the fans.  Instead, this puts Fox and Pace and the entire franchise behind the 8-ball because the local media isn’t going to give them an ounce of compassion this season.  If the Bears start 2-4 and Jay Cutler has thrown 30 INTs through the first six games, you can bet some media members will remember training camp and be ready to enact a little revenge in their postgame columns.  The antagonistic relationship the Bears have started with the local media will only snowball throughout the 2015 season and the ones hurt most by that will be the fans of the team.

In the end, this new policy helps nobody.  Reporters can’t do their jobs.  The team creates unnecessary ill-will in a fruitless attempt to stop the flow of information.  And fans are forgotten about entirely.

It’s a short-sighted, misguided play from the Bears if there ever was one, but it’s just another example of paranoid football teams seeing themselves as third world dictatorships and treating their short yardage packages like nuclear launch codes.  If the Bears actually think that keeping a Tribune or Sun-Times beat reporter from tweeting who’s practicing with the ones and who’s practicing with the two’s today will help them win another game this season, they’ve lost the plot entirely.