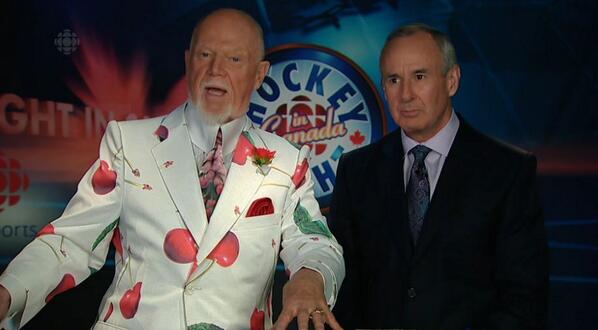 Last year, during the NHL playoffs, we decided to document Hockey Night in Canada pundit Don Cherry’s clothing. After we finished rinsing out our eyeballs, we thought, “Why not do it again?”

Well, here we are just about halfway through the 2014 postseason and there have already been a ton of eyesores on the Coach’s Corner set. So many, in fact, that we’re giving you you not one but TWO Don Cherry wardrobe retrospectives this season.

Here are Don Cherry’s sartorial selections from every playoff broadcast he’s done so far this year: 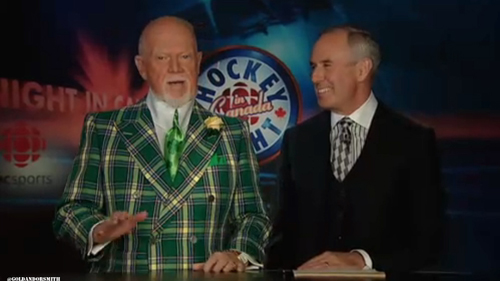 His first suit of the 2014 playoffs was not an ode to Notre Dame but rather a tribute to the late Jim Flaherty, Canada’s former Minister of Finance who passed away in March. A state funeral for Flaherty was held just hours before this broadcast. 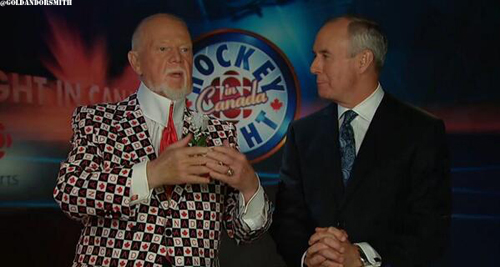 No one is more patriotic on the Canadian sports airwaves than Cherry, and he likes to remind viewers every once in a while, even if it means wearing a jacket made of old diner floor tiles. 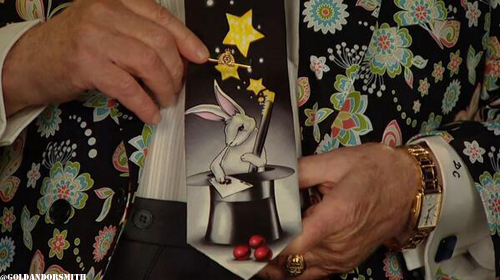 On the eve of Easter Sunday, he wears a rabbit tie, but the rabbit is standing in a top hat and clearly part of a magician’s act.

Then there’s the jacket, which was apparently designed with the help of hallucinogenic drugs. 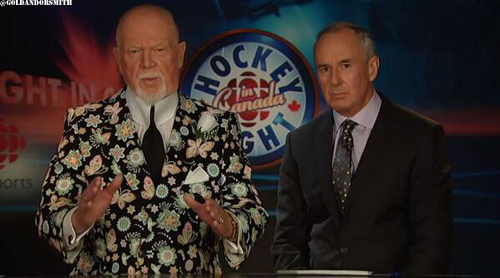 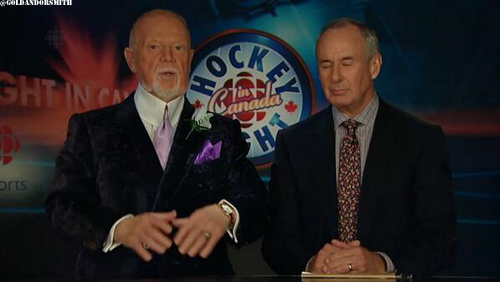 The next day, he continues the Easter theme. But this time, he celebrates the holy day by wearing the inside of a guitar case. 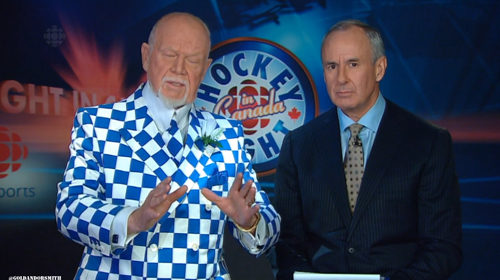 He seems to have a thing for tiles (in hat and jacket form). This one is a cross between a checkered flag and your bathroom renovations. 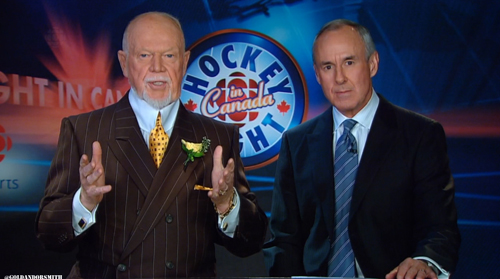 We’re guessing he’s not a fan of The Stranglers, but hey, you never know. He begins a streak of wearing gold on three consecutive broadcasts on a night when his former team (the Boston Bruins) defeats the Detroit Red Wings to advance to the second round. 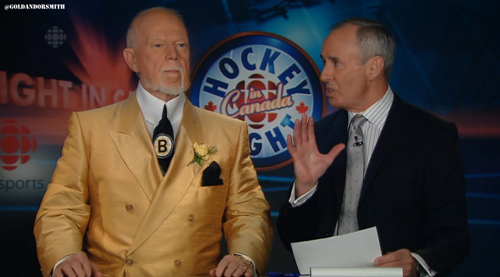 Cherry makes no bones about who he supports, which is fine when he’s being patriotic. But here, he dons a Bruins tie, simultaneously trolling all of Canada (the vast majority of his viewers) and specifically the Montreal Canadiens, who are about to begin their series against the Bruins in the second round.

Plus, there’s the whole objectivity thing, which has never been Don’s strong suit (pun certainly intended). 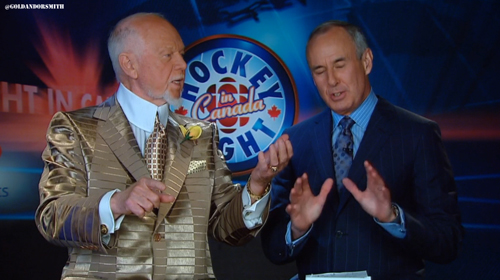 This one takes his gold streak to another level, as he pulls one right out of King Tut’s tomb.

May 3: Your Grandma’s Couch 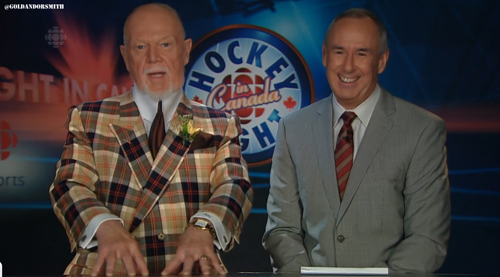 Just in case you forgot that he gets his suits custom-made at Fabricland, he reminds us with this suit that looks like your grandmother’s couch. 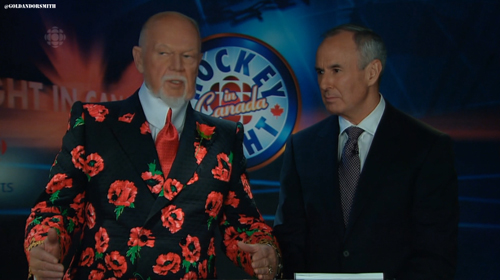 Unlike Dorothy in “The Wizard Of Oz”, he manages to avoid falling asleep despite being covered in poppies. 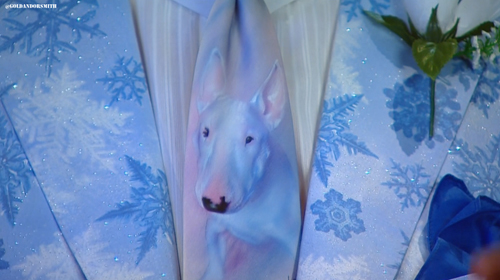 He’s always had a soft spot in his heart for his dog, Blue, or the multiple incarnations of Blue.

Here’s the full suit in all its glory. 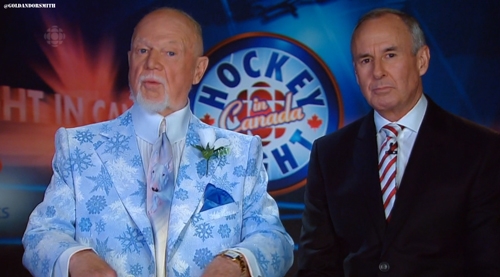 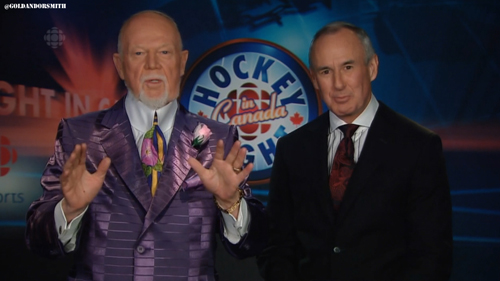 Here we have what looks like the purple version of the King Tut, but it may also be an homage to Prince. 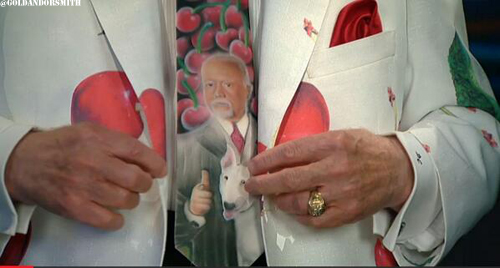 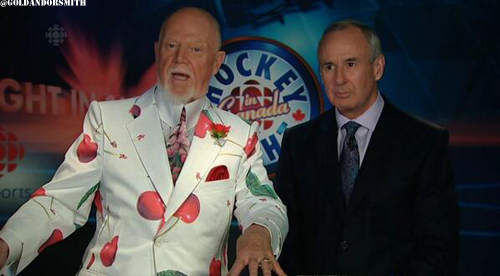 We have no qualms about saying this may be the greatest thing he has ever worn. Not only does he sport a tie with his own image on it, but there are cherries on the tie AND the jacket. Cherries. Because Don Cherry.

The self-tie is a little self-serving, but the whole cherry theme just shows you he’s self-aware. Good for him for having some fun with it.

So there you have it. You’d think this would be enough to tide us over until next season, but there’s still another month of Coach’s Corner broadcasts.

Stay tuned for another edition at season’s end.

Disclaimer: Awful Announcing is not responsible for any eye damage this post may cause. If you experience blurred vision, vertigo or nausea as a result of exposure to this post, please contact your physician.