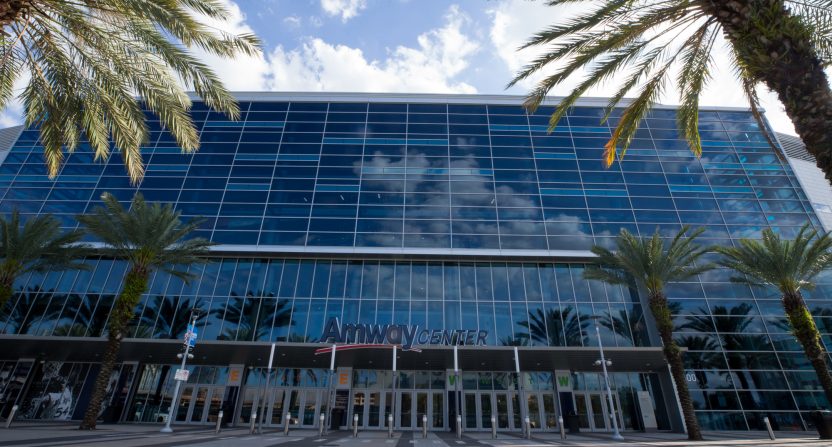 WWE announced Monday that they will be leaving their Performance Center to broadcast Raw, SmackDown, and WWE pay-per-view shows from Amway Center, home of the Orlando Magic. The first show there will be SmackDown, with that show taking place this Friday, August 21. WWE notes that they will be in Amway Center for the “foreseeable future,” though local TV news host Jon Alba reported that the current agreement runs through October 30 with no fans in attendance.

WWE didn’t outright say fans would not be in attendance, but noted only “essential personnel” will be there. That doesn’t mean fans will not have a presence. WWE has announced the “ThunderDome,” which includes a “state-of-the-art set, video boards, pyrotechnics, lasers, cutting-edge graphics and drone cameras, [that] will take WWE fans’ viewing experience to an unprecedented level.”

Like in many other sports broadcasts, WWE’s concept of the ThunderDome is for fans to virtually be a part of the show, sending reactions of themselves watching the action. This seems similar to other broadcasts, but there may be some differences in the execution. In an interview with Sports Illustrated’s Justin Barrasso, WWE Executive VP of Television Production Kevin Dunn revealed more details on what the ThunderDome will look like:

“We can now do things production-wise that we could never otherwise do,” said Dunn. “We’re flying drones in the arena, we are putting a roof inside the Amway Center, and we’ll be able to project content onto the roof. So when a big star like Drew McIntyre comes down to the ring, the whole arena will turn into his content with lasers, pyro, smoke, projections on the top of the building and on the floor. It will be a big, beautiful entrance, better than WrestleMania.”

It’s fashionable to bash WWE for some of the storyline and TV presentation decisions they have made and much of that is warranted, but I’m going to give WWE credit for trying something different. With the pandemic causing productions to adjust on the fly, this is the perfect time to experiment and maybe find the next great broadcasting idea. Yes, some of that might fall flat on its face. But you’re not going to find out what works and what doesn’t unless you try, and there isn’t a better time to try now.

Will the Thunderdome be the key to fixing WWE’s ratings problems? Surely there will be some initial curiosity, just like when empty arenas was a new concept. But just like empty arenas, there needs to be substance among the wrestling product once the newness wears off. Ultimately, it doesn’t matter what the set looks like, fans are more interested in wrestling, promos, and storylines. If fans feel that isn’t good enough, there won’t be enough bells and whistles in the world to keep people watching.