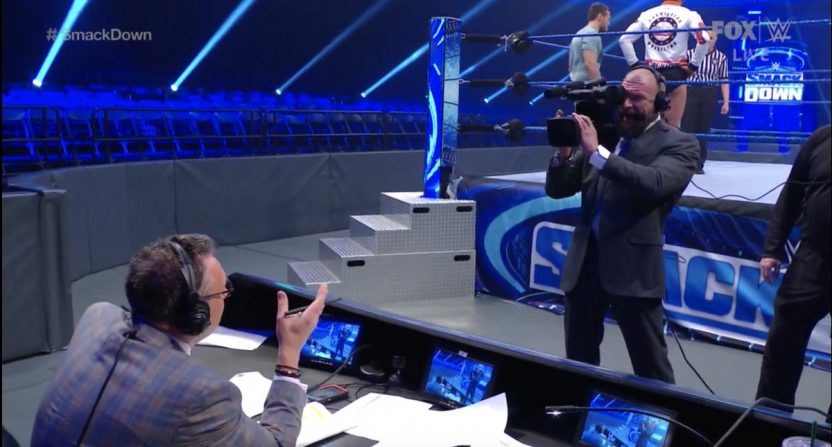 Pro wrestling is one of the only sports still operating in a time where the coronavirus has stopped everything in its tracks. WWE’s main competitor, AEW, is still going on Wednesdays, but they have had to adjust and move at least the next four events to (likely) Jacksonville. In the meantime, WWE is doing their shows to no fans in their Performance Center in Orlando.

Wednesday night’s NXT show had fans, but Friday’s episode of SmackDown was their first without. It was very strange at first, especially seeing Bayley and Sasha Banks react as if there were fans there, but it was all tongue-in-cheek and showed that even without the fans, the performers can bring a bit of fun to the broadcast.

Pumping up the non-existent crowd during the intro walkouts at WWE SmackDown. pic.twitter.com/WAx6y1lN3e

Speaking of bringing fun to the broadcast, Triple H was terrific on commentary. I’d imagine WWE is operating with a bit of a skeleton crew for these episodes, but Triple H and Michael Cole really played off each other well. That shouldn’t be a surprise with Triple H, given he came from the Attitude Era where promos weren’t heavily scripted and wrestlers needed to go off the cuff on live TV. Triple H spent years doing promos in front of millions of people on live TV without a full script, and even though he’s “Executive Vice President of Global Talent Strategy and Development,” Triple H is built for commentary.

.@TripleH welcomes the @WWEUniverse to the @WWEPC for Friday Night #SmackDown LIVE on @FOXTV! pic.twitter.com/T08ltMsjoo

Also, it was very clear that Vince McMahon wasn’t screaming in Triple H’s and Michael Cole’s ears every few seconds. because even Cole seemed more relaxed tonight. Many people give Cole a bunch of criticism, and a lot of that is warranted. But much of it is due to the head of the company yelling in his ear all the time, so Cole frequently is just doing what the boss wants him to do.

In addition to the commentary, the promos were much better. Take Roman Reigns’ interview with Michael Cole in the center of the ring. It seemed like a more natural interview, where he wasn’t taking strange pauses and didn’t feel like he was trying to memorize a script. He knows who he is and he knows his character; just tell him how many minutes he has in his segment and remind him not to curse, and let the guy do his job. That will get Reigns over much better than trying to have him memorize a script the size of a Shakespeare soliloquy. And quite frankly, WWE can do this with a lot more people on the roster.

"He doesn't know what he's in for."#TheBigDog @WWERomanReigns has a message for @Goldberg ahead of their battle at @WrestleMania! #SmackDown pic.twitter.com/qAIIf4txgw

WWE did need to pad the show, which seemed to be more of a necessary evil. They showed the SmackDown Tag Team match from last Sunday’s Elimination Chamber, which filled about a quarter of the show. Given the circumstances, it was a great way to bring in a match that had fans in order to not make it seem like a complete culture shock for those on TV.

The show ended with a John Cena interview; he discussed his WrestleMania match (which at the moment is still on) with “The Fiend” Bray Wyatt. Even with this, the lack of a crowd worked because Wyatt’s role as a dual personality horror character is really unsettling with no ambient noise.

"At #WrestleMania, it's going to be a slaughter. You just don't know it yet."#SmackDown @WWEBrayWyatt @JohnCena pic.twitter.com/3NOgXrjp4Y

Not to make light of the situation we’re all facing right now, but these are the moments when WWE shines best. Whether it’s performing to no fans in attendance due to the coronavirus or needing to do a show on the fly because of a nightmare flight in Saudi Arabia, WWE is a perfect example of what can happen if they just utilize the KISS (Keep it simple, stupid) principle. When they have time to plan, it seems like they constantly overthink and the end product is a subpar mess that feels more like an insult to the audience. But in these situations, when WWE has their backs against the wall and they seemingly go with the first idea that comes into their heads, it’s usually a better product. So to those on WWE creative, just follow your instincts.

If they aren’t forced to completely shut down, WWE will need to do these kinds of shows for the foreseeable future. This Monday’s Raw, which includes “Stone Cold” Steve Austin and The Undertaker, will be moved from Pittsburgh to Orlando. This was a great start, but let’s see how they do a month from now. Hopefully, WWE treats these shows as a bit of an experiment. Most people will understand the situation WWE is in, and won’t judge the product as critically as they would for a full show. But if WWE tries some things out and hits on something great, they might find the answers they’re seeking for their creative issues.