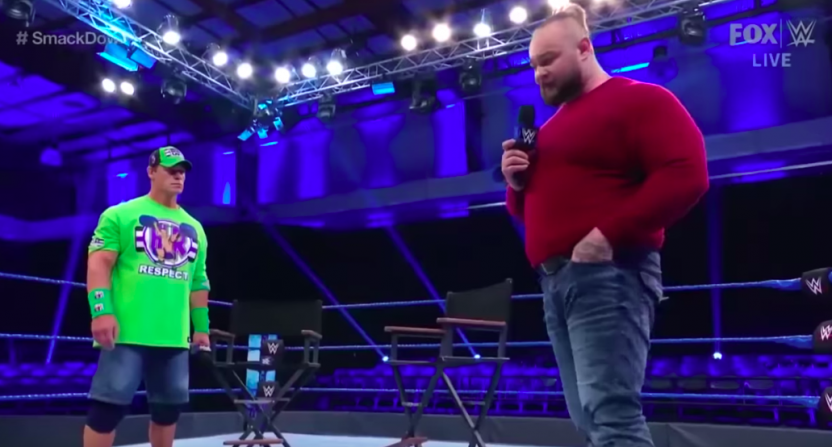 While so many professional sports have canceled or postponed their seasons, professional wrestling is a different animal.  Being scripted and entertainment based, it’s not necessary for them to cancel performances even if they are not including fans in attendance.

However, that does mean that these TV programs have to be a bit more strategic in how they present their product and the WWE made a unique choice this week to move their live Smackdown program to their Performance Center in Orlando, Florida. Given how WWE TV shows are built to be performed in front of huge crowds in arenas, it remained to be seen if this version would be of interest to casual viewers or if the idea of WWE Superstars wrestling in an empty house would turn them away.

Pumping up the non-existent crowd during the intro walkouts at WWE SmackDown. pic.twitter.com/WAx6y1lN3e

Awful Announcing’s Phillip Bupp watched the show on Friday and found that, while it took a little getting used to, it was an enjoyable program that made good on the potential that exists when you’re forced to rethink your entire model on a dime.

Not to make light of the situation we’re all facing right now, but these are the moments when WWE shines best. Whether it’s performing to no fans in attendance due to the coronavirus or needing to do a show on the fly because of a nightmare flight in Saudi Arabia, WWE is a perfect example of what can happen if they just utilize the KISS (Keep it simple, stupid) principle. When they have time to plan, it seems like they constantly overthink and the end product is a subpar mess that feels more like an insult to the audience. But in these situations, when WWE has their backs against the wall and they seemingly go with the first idea that comes into their heads, it’s usually a better product. So to those on WWE creative, just follow your instincts.

It turns out, audiences agreed, at least in terms of their interest in finding out if and how WWE could pull this kind of show off.

If that number holds steady when the final numbers are announced on Monday, that would make it the second-most-watched Smackdown of 2020, behind only the February 28 episode which featured newly minted Universal Champion (and rating draw) Bill Goldberg.

Does this mean WWE should immediately move all its TV programming to the Performance Center and shun large arenas moving forward? Of course not, but while the Covid-19 pandemic is happening and sports and entertainment companies look to minimize the ability of the virus to spread within their shows, it’s a positive sign that they can harness the interest and curiosity that fans have. Having John Cena appear and the return of Jeff Hardy also certainly didn’t hurt.

They’ll certainly need to keep the momentum going as Monday’s filming of Raw has been moved from Pittsburgh to the Performance Center as well. We’d imagine future tapings of both Smackdown and Raw will follow suit for the weeks ahead as well. It’s a new normal for WWE and other pro wrestling companies, but if Friday was any indication, there is interest in watching to see how they handle it and how creative they can get in entertaining people during a difficult time.