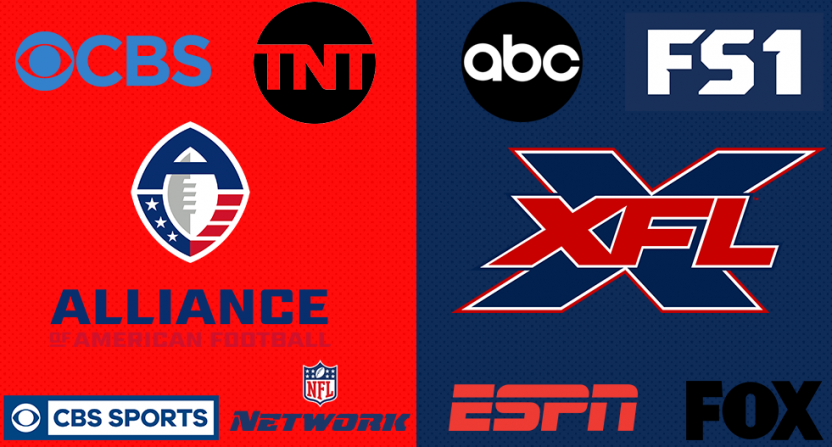 The failure of the Alliance of American Football to make it through even one season was a stunner because it seemed as though the league was doing everything the right way. The AAF had the backing of the NFL and a number of former players and executives guiding the startup. They had rosters with some household names from their time in college and the pros. They had what looked like a solid television deal with games across CBS, NFL Network, and Turner.

Nevertheless, appearances can be deceiving.

The AAF fell into financial disrepair with players not being paid, and the league abruptly folded soon thereafter. The AAF’s closure has now cleared the stage for Vince McMahon’s XFL reboot to be free of competition in the spring of 2020 when their own league launches.

A few months ago the AAF seemed to have a huge leg up on the XFL in infrastructure, support, and a television deal. With the AAF folding, it’s fair to consider that the entire concept of spring football may be just doomed no matter how hard these leagues try and no matter how many millions of dollars go down the drain in pursuit of this white whale.

And yet, even with the knowledge of how difficult life was for the AAF, the XFL made big strides this week with the announcement of its television deal. And that’s a significant one. The XFL is partnering with Fox and ESPN and will have games on broadcast networks and cable through ABC, Fox, ESPN, and FS1. Every league game will be televised, with Saturday afternoon games mostly on ABC and Fox and Sunday games mostly on ESPN and FS1. There are even two Thursday Night Football primetime games on Fox at the tail end of the season! And overall, 24 of the league’s 43 games will be on broadcast TV.

Pause there for a moment. We just saw the largest scale attempt at a spring football league in well over a decade fail dramatically and yet networks are still willing to hand over primetime television time for another go at it. The championship game (if the XFL makes it there) is scheduled for Sunday April 26, 2020 on ESPN.

Quite frankly, it’s a stunning amount of exposure for a league that theoretically should have to prove that it can actually be a viable enterprise. First, Vince McMahon’s history operating a professional football league isn’t exactly stellar. Second, there should be even more skepticism about the XFL’s ability to succeed given the AAF’s attempt mostly resembled one of those old stadium implosions.

For what it’s worth, the AAF certainly didn’t fold for a lack of exposure or quality television time. The league got a network primetime debut on CBS (which actually drew decent ratings) and then consistent television time on cable through TNT, CBSSN and the NFL Network. In fact, before the AAF folded there were even plans to add more games to CBS and Turner to give even greater coverage and exposure for the nascent league. (However, sources told Sports Illustrated the AAF was paying for its TV time, and “would have to continue paying to be on the air for the foreseeable future,” so its deal all should be taken with a grain of salt. And the XFL’s deal looks even better, given the further broadcast TV component; its 24 broadcast games are way ahead of CBS’ initial one and eventual plans for three.)

So why did Fox and ESPN place a bet on the XFL even with the hindsight and wisdom of seeing what happened with the AAF? It’s a question worth pondering.

In actuality, ESPN and Fox aren’t placing much of a bet on the XFL because the networks aren’t paying rights fees to broadcast XFL games on their airwaves. That shouldn’t come as a surprise because for ESPN/Fox to lay down millions in rights fees on such a completely unproven product would be rather crazy. However, the networks are covering production costs for each game which should at least give the XFL some relief on their overhead and bottom line numbers, so it isn’t exactly free. For the XFL, the league sees national exposure as the most important thing for the league’s early survival. If they can get into as many homes as possible, perhaps they can prove to ESPN, Fox, and everyone else that they could be a viable product.

The partnership probably makes more sense for Fox than it does for ESPN. Fox is already partnering with McMahon on Smackdown and in a relationship with WWE. And FS1 is always on the hunt for more live sports rights to become relevant as the channel has gotten nowhere close to ESPN even after several years of being on the air. ESPN doesn’t necessarily need the XFL like FS1 does, but the XFL will at least probably draw more viewers than Cornhole and Spikeball. And as noted in

And maybe that’s what the networks are thinking – that this is a roll of the dice on yet another spring football product and if it fails, there really isn’t any harm done to them. Perhaps it will fill a few hours of programming, perhaps it will give fans an outlet for their football cravings, perhaps it will even draw some decent numbers. And if it doesn’t, then the networks can get out easily and go back to the way it was before.

But maybe, just maybe, these networks are falling into the trap of spring football just like everyone that has come before. ESPN exec Burke Magnus even confidently proclaimed “Spring football will work.” To this point, it hasn’t yet and we’ll have to see it before anybody actually believes it.