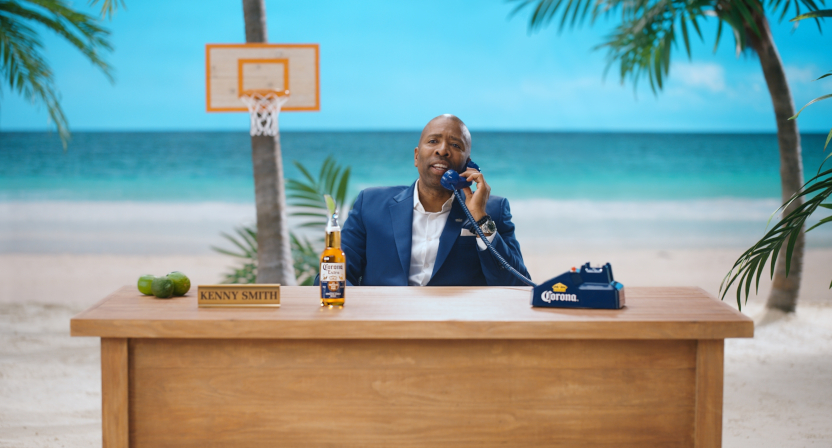 Ahead of last year’s NCAA men’s basketball tournament, Kenny Smith signed on as Corona’s basketball hotline operator (similar to what first Jon Gruden and now Tony Romo have done for football). But the eventual cancellation of that tournament over COVID-19 diminished what they were able to do with that campaign. With March Madness in full swing this year, though, Smith is back operating the Corona Hotline (through April 5), and he spoke to AA last week about that, about the recent The Inside Story docuseries on him and his Inside The NBA colleagues, and about his work covering the tournament for Turner and CBS. To start with, Smith said he was honored to be featured in a documentary like The Inside Story, and he was watching it for the first time alongside everyone else.

“The first time it was on television was the first time I saw it. I’ll tell you, either I’m really good or I’m really old, one of the two, because most of the time you don’t see a documentary about yourself. Most of the people they’re about, they’re dead. It was just an honor to be part of that and to remember how we influenced sports television, how it’s done today.”

“The influence that we created was so big. And then remembering that you, individually, were part of that. For me, my partnership with Corona here, that was my La Vida Más Fina moment. That’s our motto here, and that was it, watching that. Normally I’m on the edge of my seat, now I was firmly planted. I’m like ‘That’s where I am.’  …So I watched that documentary happy that I was part of that.”

Smith said a big part of Inside The NBA‘s longevity comes from Turner creating a space where the on-air figures on that show could develop the chemistry they’re now so known for.

“You can create an environment where chemistry exists, but you can’t create chemistry. They created an environment where our chemistry could exist. And I think that differentiates us from anyone else. It’s very noticeable to fans around the globe, really, the chemistry that we had and that we continue to have. I’m just excited to be part of something that’s an iconic show.”

As for the NCAA tournament, Smith has been part of the CBS/Turner coverage there since that partnership began in 2011. He said he’s always been following NCAA basketball, as well as the game at other levels, and covering it’s a natural fit for him.

“There’s no part of the game that I don’t have a strong connection with: AAU, high school, all the way to college and then the NBA. There’s no facet of the game that I’m not connected to. So it’s fairly easy; these are games I would be watching anyway as a fan, so now I’m just putting the analytical eye to it. I always watch college basketball, I’m always up on who the best players are because they’re coming to the next level. Then when I’m doing AAU, I’m watching high school players to see who’s coming to the next level. So I really don’t have to go far out of my Rolodex of thought.”

Smith added that while others have more context on teams’ entire seasons, his role is more to break down what’s going on in a specific game.

“My job always is just to analyze the game I’m watching. I’m watching the game as it develops, so I don’t really have to reference that ‘A certain team played a team three months ago and this happened.’ No, this is happening right now, and if they lose, they’re done.”

Smith said there are plenty of similarities between covering NCAA and NBA basketball, but one distinction he tries to keep in mind is the differences in the players involved.

“I have a higher standard for NBA [players], because that’s your job. There are certain plays that you should make; you have 24 hours in the day to develop that skill. When I watch college basketball, I analyze it knowing that 99 percent of the players don’t even have aspirations to be in the NBA or be pros; they’re just going to school, it’s part of their educational program, sports is secondary. So I definitely evaluate them at different levels; I don’t evaluate them as pros at all.”

On his work with Corona for this hotline, which will offer callers advice, prize packs, and more, Smith said he wants to bring a relaxing approach to it.

“For me, Tony Romo, really, this is his gig, he’s been doing this for football. But he doesn’t know basketball. So I’m the only basketball analyst that can man these phones. When people call 1-844-9-CORONA and they get me for basketball, they’re going to feel relaxed. If Tony was on there, they’d be on the edge of their seat, ‘I don’t know if he’s right!’ Now they can sit back in their seat, knowing that I’m here. This is a pandemic year and it’s been a lot of strain; we want these people to have fun and not be so intense about their team winning.”

“I have a cheers program I’m starting where we’re going to say cheers to people, we’ll have celebrities, Jermaine Dupri, Spice Adams, DJ D-Nice. We’ll tell people just have fun, cheers, enjoy the moment, enjoy what this is about. I’m manning the phones, I’m the best man to do it; nobody else can do it better than me.”

“And that’s where the partnership came; I just wanted people to have fun and have a positive viewpoint. Last year at this time, we were disbanded; this year, this time, we’re building. So that’s a great feeling to have.”