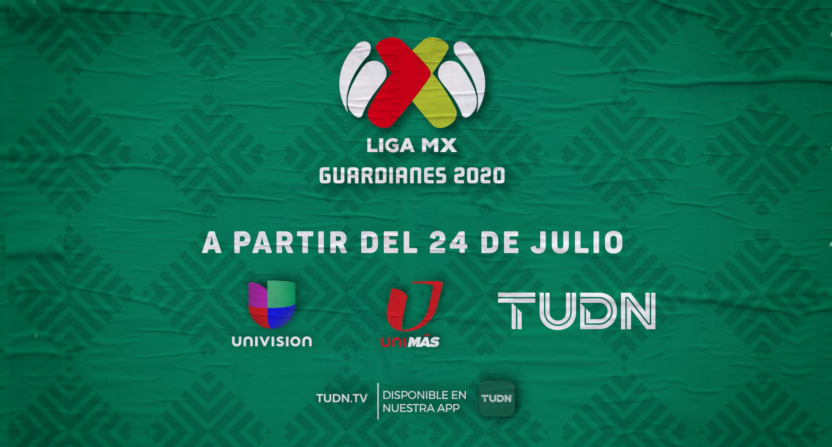 Univision and their sports brand TUDN have announced their coverage plans for Liga MX’s 2020 Torneo Guardianes (the July-December season, normally known as the  apertura, was renamed Guardianes in honor of pandemic first responders in Mexico). Their coverage, which begins Friday night with Necaxa-Tigres (7:30 p.m. Eastern, TUDN) will include more than 100 matches across the 17-week season, and TUDN and/or UniMas will now carry Monday night games for the first time; they’re doing so under a new Lunes de Fútbol (Soccer Mondays) brand. That means that Liga MX action will be available on Univision platforms five days out of seven in many weeks (Thursdays through Mondays). But even beyond that, it’s interesting to hear what they’re doing in terms of virtual fans and virtual crowd noise, which is different from some of what we’ve seen elsewhere.

Plenty of broadcasters are using virtual crowd noise these days, including Fox doing that with MLS matches. And there are plans for some virtual fans as well, with Fox saying Thursday that they’ll use animation to put virtual fans in the stands for MLB games (and perhaps more). But the approach Univision is taking here is notable; rather than use computer-created models of fans or cardboard cutouts, they’re digitally inserting footage of actual fans, and using noise recorded at previous matches between the playing clubs. Here’s more on that from Danni Santana of Front Office Sports:

When Liga MX returns to Univision’s airwaves in the U.S. on July 24, fans will be visible in the stands – at least virtually – via the same digital meeting technology that spectators have used to hold video conference calls during the pandemic.

Univision will create virtual groups featuring members of the team’s supporters clubs and season ticket holders. Images captured on fans’ computer screens at home will then be overlaid on empty seats inside the lower bowls of stadiums during live match telecasts.

Fan names will be supplied by individual clubs, Univision said. Each team will also have proprietary links available to them for group members to join with TV producers also on the call to instruct virtual audiences.

There have been some attempts along these lines before, in particular with Denmark’s AGF Aarhus teaming up with Zoom back in May to display fans on a pitch-side giant screen. And the NFL draft this year had fans of each team providing reactions to picks on a video call. But it’s notable to hear about this approach being used for more than 100 broadcasts by a network, and to hear about them also bringing in audio that’s relevant to the teams involved (if not the current match). And there are also potential revenue boosts here; Santana notes that Univision is looking to sell sponsorships for the digital fan wall, as well as virtual ads on corner flags and the center circle.

We’ll see how that all plays out for Univision when their season starts Friday night. (A full schedule is available here; note that Univision has home rights for 14 of the 18 clubs, while home matches from the other four clubs are available in the U.S. on Fox Deportes and Telemundo.) But there’s certainly a lot of interest in Liga MX stateside; Santana notes that the two-week exhibition Copa por Mexico that just concluded averaged 423,000 viewers, and Univision’s release bills Liga MX as “the most-watched club soccer competition in the country, regardless of language.” So these broadcasts will be seen by quite a few people. And  a virtual wall of actual fans is certainly a different approach than just putting computer-created models in seats, and one that perhaps has more relation to actual fans.