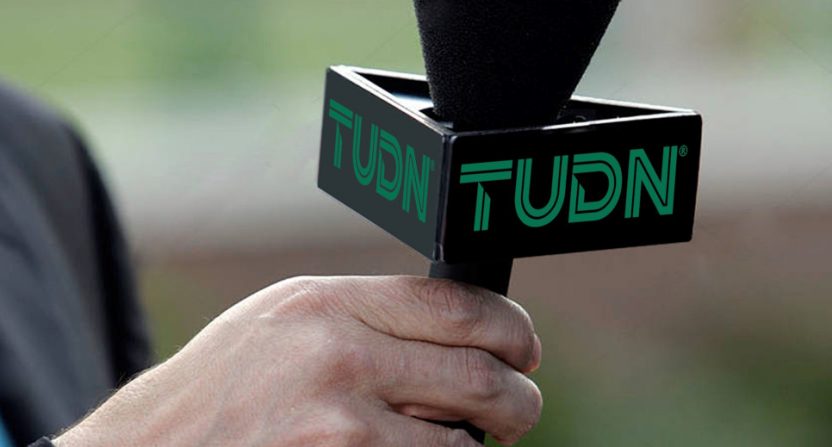 A big change is ahead for Univision’s sports coverage. On Saturday, the company will officially launch TUDN as the new brand for their sports coverage, part of a cross-border partnership with Mexico’s Grupo Televisa that will carry the same branding in both countries. In the U.S., that will see 24-hour sports network Univision Deportes Network (UDN) change its name to TUDN, and the TUDN branding will also apply across sports telecasts on Univision Network, UniMás and Galavisión and across their audio and digital portfolios. But it’s more than just a cosmetic change; this will also see Univision and Televisa sharing programming and talent, and it will lead to the new TUDN broadcasting as many as 40 more hours per week of live and original programming compared to UDN’s current lineup.

Olek Lowenstein, Univision’s executive vice president of planning and strategy for sports, spoke to Awful Announcing this week about the relaunch, the goals of this partnership, and how this can help Univision expand its presence in the U.S. not with just their core audience of Hispanic viewers, but also with the increasing numbers of non-Hispanic viewers watching their content. First, Lowenstein said this was a natural move given the increasing overlap between what UDN and TDN (the Grupo Televisa predecessor to this in Mexico) were doing.

“Seven years ago we started this endeavor with a cable channel, creating a sports division for Univision where we decided to leverage the content that we were getting from from our sister network in Mexico which was called TDN. As time went by, we started producing our own content, we started hiring more talent, we started creating content that was probably more relevant for U.S. Hispanics. With the natural evolution of of content both here and in Mexico, what we started to realize and what started happening almost organically is that we started to realize that at specific time periods, both us and Televisa were producing live sports content.”

“So about a few months back we came to the realization where we should be better at producing and leveraging the assets that we have so we can provide our audience a full slate of programming, starting very early in the morning and finishing late at night without overlapping, without counterprogramming, which at the same time allowed us to use the best talent that we could have in each one of those timeslots. So I think it was the natural evolution of UDN as a network and the natural evolution of what TDN and Televisa Sports were doing. The best next step was to start collaborating more from a production standpoint, hence the creation of TUDN. …It’s going to look fresh, it’s going to look new, and you’ll see a full slate of rebranding across all our platforms, including television, radio, digital, and our mobile app.”

There’s a long shared history between these companies. In 1962, Spanish International Communications Corporation (the company that would eventually become Univision) was founded by three men, including Emilio Azcárraga Vidaurreta; Vidaurreta had previously founded Telesistema Mexicano, which would eventually become Televisa in 1973. The two networks have ties dating back to the 1960s, including Univision carrying a lot of Televisa’s programming. And Televisa took a 5 percent stake in Univision in 2010, which was cleared by the FCC to expand beyond 10 percent in 2017 and has risen to 36 percent by recent estimates. (The rest of Univision is currently owned by several U.S. private equity funds, but they are reportedly exploring a sale.) So there are plenty of reasons for Univision and Televisa to work together, and this TUDN venture is the latest step in that.

In the U.S., one of the key changes as a result of this deal will be an earlier start to the day for TUDN’s original programming, which Lowenstein cited as necessary thanks to their recent deals to pick up European soccer rights (including the UEFA Champions League, UEFA Europa League and the Bundesliga).

“One of the things that we as UDN did in the past, I would say, 16 months; we’ve always bragged about being the home of soccer for Hispanics, and in order to keep those bragging rights and actually have those bragging rights, we needed to add European soccer. And what that created is the need to have daytime programming. Because suddenly we had all these games from the Champions League and European teams that were during the day.”

“So with the collaboration with Televisa, it just allows us to start our day early and build our audience throughout the day, starting with morning shows that recap the things that happened the day before in the world of sports, and more specifically in the world of soccer. And it builds up the expectation and the audience for our daytime programming, which is focused on European soccer.”

Lowenstein said this collaboration also means they now have reporters keeping track of all the Liga MX teams daily, and they can work that content into this daytime programming.

“It also allows us to create a window during the day where we can showcase content that’s coming from the training grounds of each one of the Liga MX teams in Mexico, which previously we couldn’t do because we were overlapping resources between us and Televisa. Now we’re able to cover all 19 teams live every day, and provide whatever happens in the training grounds of these teams. And that starts building up the audience all the way to our fringe and then culminating with our primetime programming that our audience is used to.”

Univision currently has rights to a wide variety of soccer competitions, from those European leagues to Liga MX, Liga MX Femenil, Copa MX, Major League Soccer, the U.S. and Mexican men’s and women’s national teams, the CONCACAF Champions League and more. Lowenstein said a key goal when they’re picking up rights is finding events that complement each other and slot into their schedule.

“Fitting together is the most important thing for us. The way we look at it is to make sure that we have the pieces that don’t necessarily overlap. That enables us to provide almost 24/7 soccer for our audience. The main content that we have, or the crown jewel, happens to be the Mexican League, which is the most-watched league in the US. But by itself it leaves a lot of openings in a weekly schedule, which we’re leveraging with MLS and also with European soccer throughout the daytime and throughout the week. So I think all of these elements complement each other to provide a full slate of soccer programming throughout the week.”

While Univision has long focused on soccer coverage for Hispanic viewers, they’ve recently seen growth in the number of non-Hispanic viewers watching, especially around events like the World Cup (which they last had rights to in 2014) and the UEFA Champions League. And that’s helped boost the network overall; according to their data, they accounted for half of all U.S. non-World Cup soccer consumption last year, and they’re on track to account for around half of all soccer consumption this year. Lowenstein said English-language viewers are important for Univision too, and the growth in that audience has been valuable for them.

“We see value in us being the leader in soccer regardless of language. Our first large event as UDN back in 2014 was the World Cup, and we started seeing the phenomenon of having English-language speakers preferring to watch sometimes the games with us because of the passion of our announcers. I think that has grown over time.”

“We have dipped our toes over the past few years with some English-language announcing, particularly with MLS and some Liga MX. And I think all that culminates a little bit this fall with Univision launching TUDNxtra, which is a partnership that we’re doing with MVPDs. We’ll have hundreds of exclusive matches from Europe, we will have all the Liga MX matches narrated in English, so I think that’s an interesting next step that we’re taking in terms of of catering to to non-Hispanics.”

He said changes in the television industry and the increasing focus on live sports and live events made this partnership a vital one to strike.

“In today’s media landscape, in today’s world with the growth of importance of live events and live content and original content and sports, we saw an opportunity in joining forces and collaborating by taking the best assets that each one of us could put on the table to deliver more live content, more original content, the best talent in the industry, and better coverage of marquee events. Even on the digital front, this provides our users across Mexico and the U.S. better user experiences when it comes to consuming sports.”