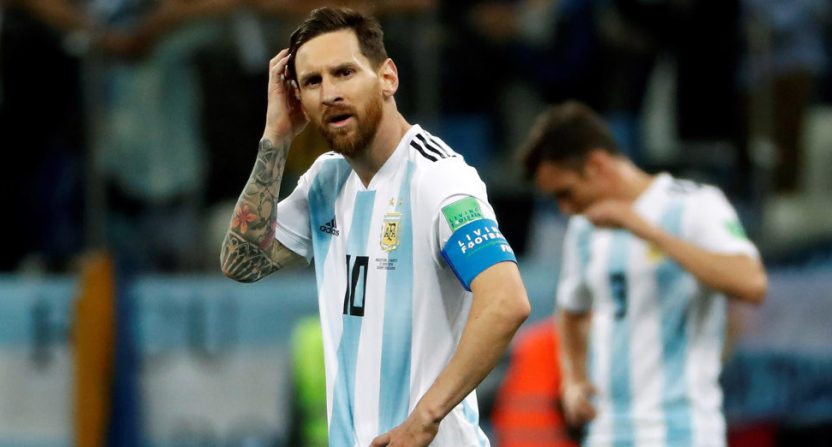 While the World Cup is still in the group stage, and while U.S. TV ratings haven’t been great (for Fox in particular; Telemundo has seen some peaks, and even outdrawn Fox for some matches), the streaming numbers have been very good. And that’s true both in the U.S. and around the world. Anthony Cuthbertson of The Independent writes that one streaming measurement provider says the numbers have already shattered their previous peak, which came in this year’s Super Bowl:

The data was collected by Conviva, a streaming TV measurement provider that works with many of the World Cup streaming publishers, including Fox, Telemundo/NBC, Hulu and Sky.

The 7.7 million peak viewership occurred during the Argentina versus Iceland match, which starred Lionel Messi and ended in a 1-1 draw.

That’s very impressive. And Cuthbertson’s piece also notes that the BBC has seen great streaming success, with over three million people tuning in to at least part of England’s win over Tunisia. Beyond that, Telemundo has announced that Thursday’s Argentina-Croatia match (which featured the sad reaction shot of Messi seen above) was “the most-watched livestream event in Spanish-language history”:

In addition, the record-breaking match led Telemundo to its biggest day ever with 2.8 million uniques, 9.2 million live video streams and 142 million livestream minutes.

And Fox announced major streaming numbers of their own for Thursday, the best in their history, even if that number was still much lower than Telemundo’s:

Yesterday was FOX Sports’ BEST DAY EVER in authenticated streaming with 122 MILLION minutes viewed – 117 million of which were #WorldCup programming.

Now that gets two thumbs up. ?? pic.twitter.com/YdScDc6Aee

There are several factors that could be boosting the overall streaming numbers. For one, the timing of this World Cup has problems for TV broadcasters in the U.S., but it’s likely actually a boost for streaming numbers. With many games on while much of the U.S. is at work, there may be a lot of people watching this from offices, similarly to how early rounds of March Madness often do very well in streaming. And the time works out decently for European streaming too, with early games starting while some are still at work. But beyond that, and probably more importantly, streaming continues to become more and more common, and more and more accessible on TVs and TV-connected devices as well as phones and tablets. And that’s why we continue to see these numbers trending up year after year.

It should be noted that the stream numbers and unique numbers are not per-minute averages (the way TV broadcasts are typically measured), and that they include plenty of short streams. For example, the Telemundo numbers of 68 million minutes for Argentina-Croatia would mean around 750,000 viewers if each of those views was of the entire 90-minute-plus match, but the real numbers of people watching in an average minute are likely much lower (especially as we know that there were 4.3 million streams counted in total). And the total of 2.8 million uniques for the day shows that the 4.3 million streams include a lot that aren’t unique. Aall of these numbers are still pretty small in comparison to the TV audiences, but the trend for streaming is definitely on the rise, and rapidly; the 40 percent jump over a record set just months ago during the Super Bowl is crazy. And that record may go even higher as we move towards the knockout rounds and the final.