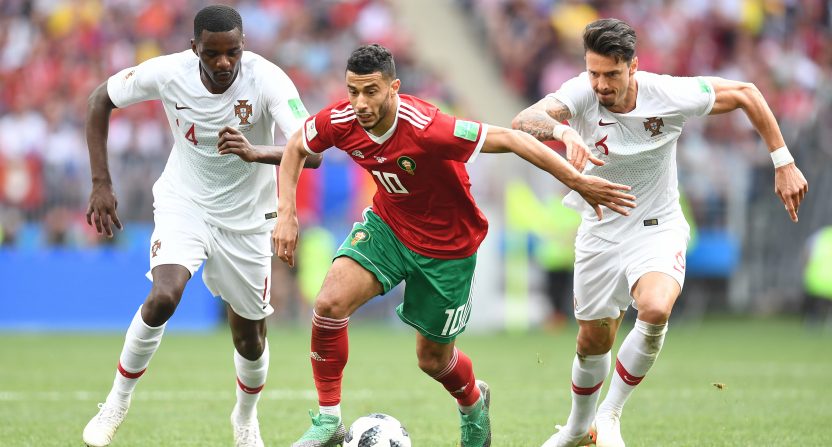 Heading into this summer’s World Cup, everyone knew stateside ratings were going to take a hit. With the U.S. having failed to qualify for the tournament, it was always unlikely that the event would generate enough buzz here for Fox and Telemundo to replicate the big numbers ESPN and Univision did back in 2014.

But even still, network higher-ups were presumably hoping for a little better than they’ve gotten. Bloomberg reports Friday that ratings for the first week of the tournament have dropped a whopping 44 percent from four years ago.

The difference isn’t merely the absence of a widely watched U.S. game or two. Per Austin Karp of Sports Business Daily, ratings are down dramatically even excluding U.S. matches, suggesting that viewership is suffering from a more general lack of stateside buzz.

Even excluding Team USA games early in World Cup from 2014 and 2010, Fox Sports (Fox, FS1) is down around 39% and 14%, respectively. Cannot be the numbers that were expected when Fox ponied up big for this event. Just not enough buzz domestically https://t.co/PIroKvE3ql

In fairness to Fox and Telemundo, there’s a whole lot working against them this tournament. Not only does the USMNT’s absence leave American fans without an obvious rooting interest, but the networks must also contend with time differences that result in games airing as early as 6 a.m. ET, which is the dead of night on the West Coast. And besides, Bloomberg points out, the World Cup is affected by the same factors that have tamped down viewership across the television dial.

The tournament is also probably experiencing the effects of rapidly changing viewership habits, according to sports media consultant Chris Bevilacqua. There’s a steady stream of people surrendering their cable subscriptions in exchange for digital offerings, a trend that’s affecting nearly everyone in television.

“It’s a combination of all these things that leads you to this drop,” Bevilacqua said. “These numbers aren’t necessarily a shock. This is probably along the lines of what the networks thought was going to happen once the U.S. failed to qualify.”

All hope isn’t lost for Fox and Telemundo, though. As the tournament progresses, fewer games will start in the early morning, and it won’t matter as much that the U.S. is absent because the U.S. is typically knocked out by the later rounds anyway. There’s at least some chance ratings can catch up a bit with those from 2014, particularly if Mexico (which beat Germany in a game that drew a large audience on both Fox and Telemundo) can stay alive for a while.