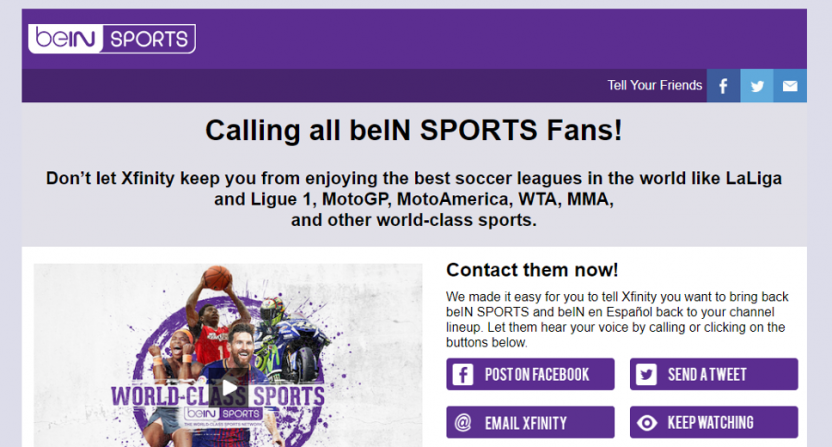 It’s been a rough week for beIN Sports. Their channels aren’t currently on Comcast Xfinity or Verizon Fios thanks to a carriage negotiation dispute, and now they’ve also had the Federal Communications Commission dismiss their claim that Comcast was discriminating against them in favor of Comcast-owned NBCSN. The FCC’s decision relies on two key factors, with each described as an independent basis for the ruling; beIN didn’t provide enough evidence for a prima facie (first impression, or enough to require a rebuttal) case that their main beIN Sports channel and their beIN en Español channel are “similarly situated” to NBCSN and Universo, based at least partly on uncertainty about their future programming, and they also didn’t prove that Comcast had discriminated against their channels in the past.

Here are the key parts of the decision (condensed)

After reviewing the Complaint, we find that beIN Sports has failed to put forth sufficient evidence of its program carriage claims to establish a prima facie case.  In particular, we find that, although beIN Sports has satisfied some of the elements necessary to establish a prima facie case, it has failed to provide evidence sufficient under the Commission’s rules to support its claim that beIN and beIN-E are “similarly situated” to the Comcast-affiliated programming vendors cited in the Complaint, NBC Sports Network (NBCSN) and Universo.  Accordingly, we dismiss beIN Sports’ Complaint.

…We also find, however, that beIN Sports has failed to provide evidence sufficient to support its claim that the programming it would provide under the renewal agreement is similarly situated to the video programming provided by Comcast’s affiliated vendors, NBCSN and Universo, as required under Section 76.1302(d)(3)(iii).

The full decision can be found here (PDF).

Comcast followed up with the following statement:

“We applaud the FCC’s Media Bureau for dismissing beIN’s complaint and allowing us to make program carriage decisions based on sound business reasons and in the best interest of our customers.  Our carriage of the beIN channels was consistent with how they are carried by most other cable and satellite providers as niche services on specialty and less-penetrated tiers.  We in no way discriminated against beIN.”

There are a few notable things here. For one, beIN wasn’t able to prove past discrimination; yes, Comcast placed beIN/beIN-E in a higher tier than NBCSN/Universo, but beIN couldn’t prove that that was a violation of the Comcast/NBC merger terms thanks to other providers acting similarly and thanks to a lack of proven demand for beIN’s content. And even the descriptions of the networks in the complaint illustrates they’re rather different in terms of the sports they carry.

As per the complaint, beIN’s channels “primarily distribute[ ] top-flight European soccer, including games of the Spanish La Liga, French Ligue 1 and Italian Serie A as well as FIFA World Cup Qualifiers. . . .  In addition to soccer, beIN’s English- and Spanish-language programming includes sports-related news and original programming, motor sports, college sports, rugby, track and field, combat sports, Conference USA football matches, and multiple boxing promotions,” while NBCSN is described in the complaint as “a national sports cable network that carries basketball, professional and college American football, soccer, hockey, motor sports, and golf among many other sports events.  NBCSN marquee events include the Summer and Winter Olympics, soccer’s English Premier League, PGA, NFL, NBA, NHL, IAAF World Championships, and the Six Nations Championship.” It will not be shocking to anyone that things like the Olympics and the Stanley Cup playoffs draw more viewers than Ligue 1.

Another interesting element of this, and one with potential implications for the carriage negotiations, is how the decision talks about the “significant uncertainty surrounding the programming that would be provided to Comcast in a renewal agreement with beIN Sports.” That’s further outlined in another part of the decision discussing the renewal term sheets beIN and Comcast exchanged before beIN filed this complaint. Unfortunately, it’s highly redacted:

These term sheets show significant uncertainty about what programming would be provided by beIN Sports in a renewal agreement.  The current agreement between the parties includes [REDACTED].  In contrast, [REDACTED] [REDACTED].

But we can guess at what some of that is. beIN formerly held U.S. rights to Italy’s Serie A, but that deal expired and those rights are still out there (and likely worth more following Cristiano Ronaldo’s move to Juventus), with bigger players like ESPN and Turner reportedly targeting them. They currently hold the rights to Spain’s La Liga (which they’ve shown in the U.S. since 2012-13) and France’s Ligue 1, but most of the other top soccer leagues out there are spoken for, with NBC holding rights to England’s Premier League, Fox holding the German Bundesliga, and Turner picking up the Champions League.

So much of the top-tier soccer is claimed, and beIN’s coverage of other sports has been limited at best so far. And there’s been no indication they have other significant U.S. deals in the works. If they don’t come up with more compelling programming to replace that Serie A loss, it’s hard to see them justifying keeping their current fee or perhaps lobbying to raise it (as Verizon claimed they did) or to move to a better tier. And that lack of certainty about their future programming hurt them here, as they couldn’t prove they were “similarly situated” to the likes of NBCSN.

Thus, the overall takeaway here is that the FCC is not going to step in to help beIN in their dispute with Comcast, and that probably makes it even less likely that’s going to end well for beIN. Of course, they’re far from the only network facing distribution challenges and carriage fights; both the Pac-12 Networks and the Big Ten Network have some current issues there, and BTN’s current fight is also with Comcast. And there’s a larger landscape here; with cord-cutting growing, as well as transitions to skinny bundles, providers are trying to ensure that their options are as competitively priced as possible and that they only include channels people actually want to watch. That makes life very tough for some of the more niche channels like beIN. And this FCC ruling means that they won’t have help from that direction.