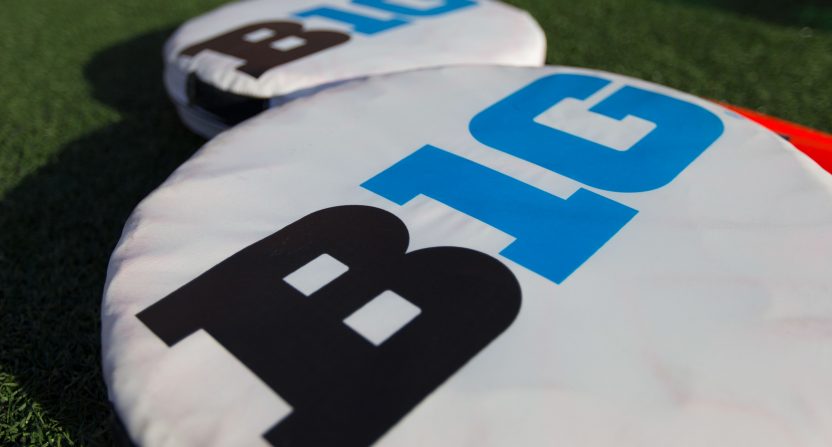 As we say in the Awful Announcing offices, “If it’s a day ending in ‘y,’ it means another cable dispute is brewing.” This one involves the largest cable provider, Comcast and one of the biggest league-owned channels, the Big Ten Network.

According to Sports Business Journal’s John Ourand, their 10-year carriage agreement ends next month and a fight between BTN, Fox, and Comcast is brewing that could also spill over into FS1’s coverage of Big Ten football.

Comcast and Big Ten Network are at the beginning of a carriage fight, Fox Sports President Mark Silverman says.

Comcast subscribers may not have Big 10 football games on BTN or FS1 this season. A 10-year carriage deals ends next month.

Silverman: Comcast has not responded to negotiations yet.

Silverman says BTN was not notified when Comcast dropped the channel in out-of-market systems.

How does this involve sister network FS1? Ourand explains that Comcast paid a surcharge to FS1 for those games last year, and that agreement also comes to an end with the Comcast/BTN deal.

Last year, Comcast paid a surcharge to get access to Big Ten games on FS1. That deal also ends next month.

Remember: Big Ten Network is run by Fox, which owns a 51% stake in the channel (with the Big Ten owning the other 49%). With Fox gaining rights to the Big Ten a couple of years ago, having football games on FS1 and Big Ten Network was a huge boon for Fox Sports. But with Big Ten Network’s agreement about to expire, the war of words between two media behemoths is about to escalate into a full-blown carriage war.

This dispute has been brewing for quite some time. Back in April, Comcast dropped Big Ten Network outside of the conference’s footprint. A BTN spokesperson expressed surprise over the development:

“Like legions of Big Ten fans across the country, we were disappointed to learn that Comcast Corporation unilaterally decided to drop the Big Ten Network from Xfinity in many regions outside the home markets of the Big Ten universities. The outpouring of concern and outrage from fans nationwide speaks for itself – BTN is a valuable part of Comcast’s sports lineup, and we share their frustration at Comcast’s decision to deprive them of hundreds of exclusive games and programming featuring some of the most iconic universities in the country.”

Fox is already mounting a campaign towards Comcast Xfinity subscribers, more than a month before the start of the college football season.

Back when Big Ten Network launched in 2007, it had trouble gaining traction with the cable companies. It was only on a handful of providers, including DirecTV. The Appalachian State-Michigan game was the first major live game broadcast on the network, and immediately gave BTN credibility.

Starting in 2008, other major cable providers like Comcast began coming on board after a year of not carrying the network. But now it appears that with one of the agreements expiring, Comcast is about to play hardball. Shutting Big Ten fans out of football games would be disastrous for Comcast, especially in Pennsylvania, Michigan, and BTN’s home city of Chicago, and logic would indicate that a deal will eventually get done before fans miss a snap.