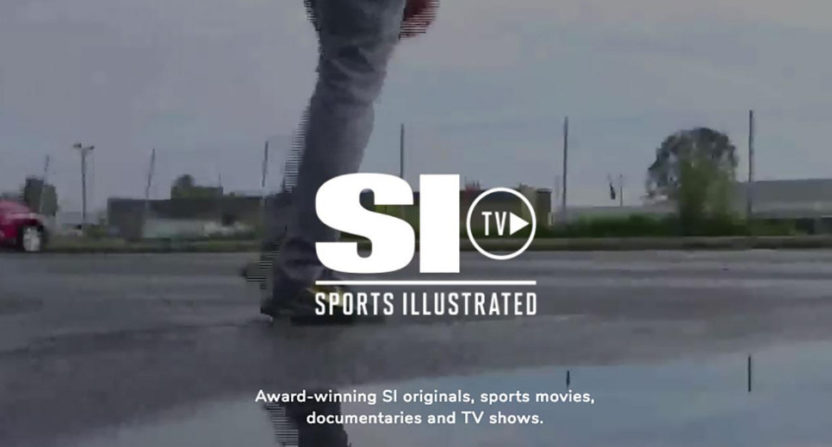 Sports Illustrated streaming service SI TV launched in November on Amazon Channels as a $4.99/month service offering sports movies, original discussion shows and more, and SI executive producer of video/SI TV VP of programming Josh Oshinsky spoke to AA in January about their plans to expand with high-end original documentaries like Mike Tollin’s high school basketball film We Town. Now, they’re headed in a further new direction. SI TV previously was on-demand only, and only available through Amazon Channels; it will continue to be available there, but it’s also now launched as a 24/7 linear channel, and has been picked up by fuboTV.

Here are some quotes on that from SI’s release:

“The opportunity to expand our distribution for the first time to linear TV with premier provider fuboTV is an incredible moment for our network,” said Josh Oshinsky, head of programming for SI TV at Meredith Corporation. “Now even more TV-watching sports lovers will have access to content that has Sports Illustrated’s unparalleled storytelling, perspective and access. From original documentaries to studio shows to beloved sports-related acquired movies and shows, fuboTV’s subscribers can rely on SI TV for the most compelling sports stories, interviews, analysis and entertainment.”

… “Sports Illustrated is one of the biggest brands in sports media and an ideal addition to our sports-first live streaming lineup,” said fuboTV Head of Content Strategy & Acquisition Ben Grad. “We are thrilled to be the first to partner with SI TV as it launches its linear network, as we continue to super-serve sports fans.”

The channel will still offer its full on-demand library, but will also have a linear feed continuously showing various SI TV programming. It will be available as part of fuboTV’s Sports Plus package, which costs $8.99 per month on top of a fuboTV base package ($19.99 for the first month, $44.99 per month thereafter). Also included in that package are NFL RedZone, six Pac-12 Networks regional channels, three FOX College Sports channels, GolTV (English and Spanish), Argentine channel TyC Sports, Fight Network, and FNTSY Sports Network. So, for those only interested in SI TV and not the other channels there, it may make more sense to just subscribe through Amazon Channels, but for those who were already interested in other things included in Sports Plus, this could be a worthwhile addition to that service.

What exactly is on SI TV? Well, in addition to We Town, their other current medium and long-form series and specials include Under The Cover (extra features on the current SI print cover subject), The Vault (looking back at some of SI’s best stories over the years), and three Swimsuit specials (part of the brand that’s expanded in many directions recently). Their weekly studio programming includes The Crossover (basketball culture), Planet Fútbol (soccer), and The Line (sports wagering and daily fantasy), all of which feature plenty of guests. And they have a significant lineup of sports movies, including Bull Durham and Eight Men Out, and Oshinsky said in January that other original documentaries are in the pipeline, part of a quest to be “that legitimate 30 for 30 alternative.”

It’s certainly interesting to see SI TV turn into a 24/7 channel and launch as part of a streaming “skinny” bundle, and while fuboTV’s the first to pick it up, it may not be the last. Many of the streaming bundle options certainly recognize that sports fans are an important audience for them and a vital audience to market to, as shown by things like YouTube TV being a presenting sponsor of the World Series and the NBA Finals and signing local broadcast deals with LAFC and the Seattle Sounders. fuboTV has been perhaps even more focused on sports than other skinny bundles thanks to their origins as a soccer-focused service, and that’s been clear in their marketing as well, so it’s perhaps not surprising that they’re the first to distribute SI TV. But others may well follow; if offered at the right price point, SI TV could perhaps be a nice value add for some bundles’ sports tiers. (And adding digital channels like this is also something that could help further distinguish skinny bundles from traditional cable and satellite options.)

It’s also worth considering this in the larger context of SI and new parent corporation Meredith. As Alex Weprin notes at MediaPost, SI TV was launched last fall before Meredith officially took over Time Inc., and this change may be about Meredith trying to boost its presence and distribution. And that could be important on a couple of fronts. For one, SI TV is thought internally to be a key part of the brand’s future, and it has value to them as not just a way to bring in extra subscribers and revenue, but to expand their presence in the sports conversation and promote their magazine, their digital coverage and their personalities in the process.

But with Meredith reportedly looking to sell off SI and other titles, bolstering its video presence and expanding that to a larger audience may be useful in attracting more suitors. And that could especially be true for those more interested in video and digital than print. We’ll see if this deal winds up being the first of many bundle deals for SI TV or if it remains the only one for a while, but it’s definitely a notable move, and one that expands SI TV’s reach while also shifting what that service is.