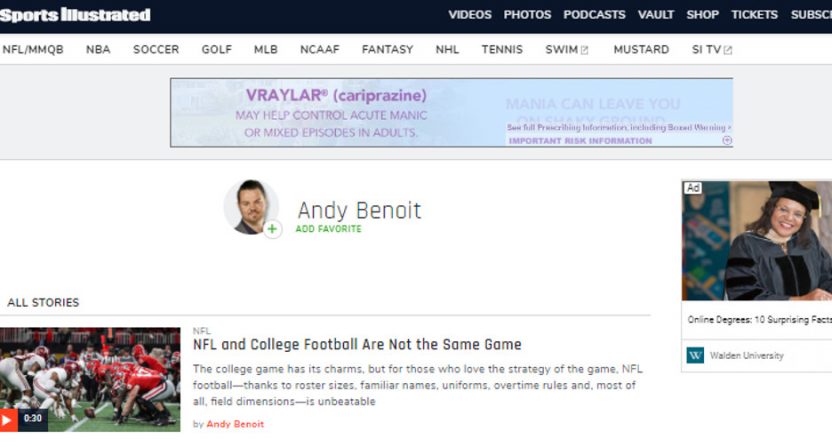 Andy Benoit, a long-time writer for Sports Illustrated’s The Monday Morning Quarterback NFL site, has long been known for some provocative takes on things outside the NFL, such as the “women’s sports in general not worth watching” tweet during the 2015 Women’s World Cup that got him lit up by even Amy Poehler and Seth Myers. That experience apparently has not dissuaded him from weighing in on other sports he doesn’t watch, and this time, he’s done so in a full SI.com article, targeting college football.

It may be benevolently headlined “NFL and College Football Are Not the Same Game” (which, yes, obviously), but the thrust of the article is about how Benoit thinks the NFL is great and college football isn’t, despite him opening by saying he doesn’t watch college football:

For the past six years I have watched almost every NFL game and, aside from a few pre-draft projects, zero college football games. This is partly because covering the NFL is my job, but mostly because I enjoy pro football infinitely more than college. To me, comparing college to pro is like comparing a small town community theatre to Broadway.

…But there are those of us who like football’s pageantry but love its strategy. We see the game as a chess match, only where everyone’s pieces are not the same, those pieces are not confined to individual squares, they move not one at a time but all at once, and that movement usually doesn’t stop until someone scores or gets hit.

Benoit’s whole reasoning can be picked apart piece by piece, with many of his arguments not even having much to do with strategy. He argues that bigger rosters and less-seen opponents make the game less strategic (how does an increased difficulty of preparation make something less strategic?), that more jersey number freedom is “chaos” (maybe just for those who can’t identify the players?), that college football has too many teams (great strategic argument there), that college football’s overtime procedure is obviously flawed despite requiring both teams to play defense, unlike the NFL, (“In an NFL overtime, you keep playing football. In college, you play red zone ball”), that wider hashmarks mean less strategy because there’s greater space for defense to account for (and that’s not strategy?), and that college football games are too long (a key strategic consideration, obviously; also, the difference only seems to be about 15–20 minutes).

But beyond his points not really making sense or living up to his thesis, it’s particularly hilarious that he starts the whole article by admitting he doesn’t watch what he’s complaining about. And he got deservedly roasted on Twitter:

You literally state you don’t watch college football. How in the world can you then compare it to something… I’ve never had an orange, but let me tell you why an apple tastes better than an orange.

This was all I needed to see pic.twitter.com/rkTIeGdvu0

Try playing Oregon and Stanford in back-to-back weeks and tell me there's no strategy in that.

Not to mention a bunch of NFL offense now came up from the college level (and some of *that* from the HS level).

Fuck ass Andy Benoit is still going on about Ty Montgomery’s jersey number. Like everyone in the league doesn’t know he’s a RB.
“Oh, they’re going with a 4 WR set”
*Montgomery lines up in the backfield*
“What the FUCK?!” pic.twitter.com/uCQhPAvFTt

Read the bad thing and will be thinking about the line "Jersey numbers. In the NFL, they mean something." for a long time

Benoit’s known for plenty of hot takes on NFL matters too, such as arguing for the reevaluation of the Richie Incognito bullying scandal after Jonathan Martin’s subsequent legal issues and claiming that Matthew Stafford is clearly superior to Russell Wilson. But his takes get really fiery when it comes to other sports. And the more surprising thing here may not be that he wrote this nonsensical argument, but that SI published it.

While this piece will certainly get plenty of hate clicks, telling college football fans that the thing they like is dumb with no actual evidence to support that is an interesting strategy for a big publication. The NFL and college football are different games, and both have plenty of passionate fans; there are also plenty of fans who like both. Publishing a nonsensical “Sport A is better than sport B!” piece like this is a curious move from SI, and one that’s producing plenty of backlash.