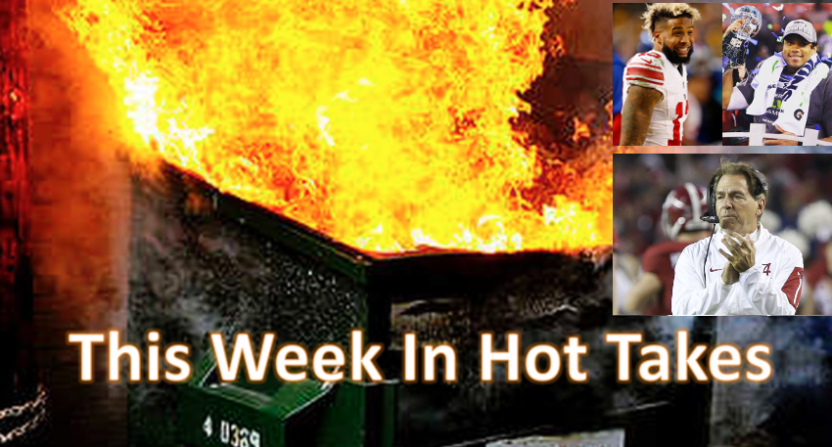 5. Chris Wesseling criticizes reporters discussing NFL concussion protocol: Sunday saw one of the more bizarre NFL concussion protocol stories in some time, with Houston Texans’ quarterback Tom Savage hit hard, seeming to suffer a seizure on the ground, evaluated under the sideline concussion tent and then put back into the game before later being pulled after he started spitting out blood. That led to a lot of reporters and columnists criticizing the NFL for letting Savage back in (for example, our Brad Gagnon wrote that “This speaks for itself. The league’s concussion protocol is a sham.”). And that in turn led to NFL.com’s Chris Wessling criticizing the critics:

Sportswriters with delayed replay, internet gifs and multiple angles are so much better at recognizing concussion signs than NFL refs in real time. Line up for your lollipops, sportswriters.

Wesseling’s point that it’s easier to evaluate concussion symptoms with replays and angles than for a ref seeing it in real time is valid, but that’s already known, and that’s why the NFL has concussion spotters. And the failure here wasn’t on the refs, but on the sideline evaluation that allowed Savage to return to the game. That makes this a pretty hot take.

4. Stephen A. Smith rants about how “disgusted” he is by Rigondeaux quitting: Smith delivers plenty of boxing hot takes, and his latest came Saturday after the Guillermo Rigondeaux – Vasyl Lomachenko fight. Rigondeaux withdrew after six rounds with a hand injury, which he said he thought was a break but turned out to be a bruise. That led to many boxing figures bashing him, but, as per usual, Smith’s take was one of the most over-the-top:

Smith starts by talking about how “disgusted” he is, but this gets real good (or bad, depending on your perspective) around the 3:00 mark, where he rants about some of Lomachenko’s opponents withdrawing.

“It’s one thing to outclass an individual! It’s another thing for an opponent to quit. …I understand that Lomachenko may be great, I get all of that, but I’ve still got questions. You know why? I’ve got QUESTIONS about the level of competition that is going against him in terms of the heart inside dudes’ chest! You’re a professional fighter, and you’re quitting while all your faculties are in order? You haven’t been staggered, you haven’t been wobbled, you haven’t been dropped, you’re not disoriented, but you’re still going to talk about how you can’t finish a fight! …It’s a gladiator’s sport!”

The disparity in public perception of athletes’ sideline outbursts is a worthwhile issue to debate. But clearly, Beckham is bored. He is not the story and he hasn’t been for some time, and here he comes manufacturing a controversy to get back in the conversation.

He must miss being on the tabloid back pages.

Of course, Beckham comparing himself to Brady is ridiculous for a thousand reasons.

Brady has won five Super Bowls, is either arguably or definitely the best quarterback of all time, and has been in the league since 2000, when Beckham turned eight years old.

Beckham hasn’t won a playoff game, and in his one playoff appearance, he dropped two passes including a touchdown and lost by 25 points.

Yes, Pat, I’m sure Beckham is desperate to be talked about by you and your tabloid colleagues, given how respectful you’ve been in your coverage of him. And the Beckham-Brady comparisons here are particularly dumb; yes, they haven’t found the same level of success, but they don’t even play the same position. What gets really funny is why Leonard’s mad, though. It’s because Beckham wouldn’t talk to him:

But what should be discussed here is not Beckham’s comparison of himself to Brady. We all know it’s not valid, and we all know that the context and extent of Beckham’s transgressions are different than Brady’s. And we all know that Brady has won five championships and that Beckham still has to prove he can win one.

Still, no. The story here isn’t Beckham vs. Brady. The story is that Beckham wants to talk about himself at a time when the story is about anything but him: organizational dysfunction, a coach and GM losing their jobs, Beckham’s own quarterback being benched. And no comment from Beckham on any of those topics. Just himself.

I wonder why Beckham wouldn’t want to spend his time talking to a guy like Leonard? And, in other circumstances, a player would probably be praised for keeping his head down amidst organizational turmoil. And none of that has anything to do with disproving Beckham’s point about how emotional displays from him are condemned, but ones from Brady are praised. If anything, Leonard helps buttress that point here. He’d undoubtedly criticize anything Beckham said about those other topics, but because Beckham didn’t speak up, Leonard is left to criticize him for not delivering opinions on the Giants’ internal drama. That’s a hot take, all right.

2. Andy Benoit tries and fails to argue that Matthew Stafford is better than Russell Wilson: Benoit posted a piece at The MMQB titled “The Russell Wilson Conundrum,” which included an argument that “Wilson up until recently has never been a top-10 quarterback” as part of its premise and a “I’m putting Stafford over Wilson—and it’s a no-brainer” line. Drew Magary has an excellent destruction of the piece in general at Deadspin, with the appropriate headline of “This Andy Benoit Take About Russell Wilson Is So Fucking Stupid I Want To Die. A highlight from Magary’s takedown (Benoit’s lines are indented):

Another way to view the question, and the way offensive coaches ponder this sort of thing, is: If you’re building an offense, which QB do you want?

For me, it’s Stafford.

No question, my brain now has leprosy.

But here’s the tricky part:

“How do I have a job? Because just this morning, I got my head caught in the glove box.”

If I’m running a defense and I get to choose between facing Stafford or facing Wilson, I’d choose to face Stafford.

Oh, so Russell Wilson is the better quarterback to have. Thanks. Glad you’ve wasted our time.

More apt for this conversation, Andy Benoit is the guy I don’t want to read, but I also don’t want him to write. It’s a real conundrum, it is!

That’s a nice takedown of a very stupid argument.

1. Chuck Modiano calls Nick Saban “a clueless, gutless, selfish coward”: Why is Saban being described as a coward? Because he didn’t endorse a candidate in the Alabama U.S. Senate election. That’s Modiano’s argument in this piece, our second from the New York Daily News this week, titled “Nick Saban is a clueless, gutless, selfish coward for his silence on Roy Moore.” Some highlights:

The words in this title to describe Alabama head coach Nick Saban are not hyperbole.

Nick Saban is not just any coach or employee. At over $11 million a year, he makes more money than all U.S. workers employed by a local or state government. He is a public servant who works at a public university as an alleged leader of college “students.”

The lead-up to Roy Moore and Doug Jones’ election Tuesday should have been Saban’s shining career moment to show true leadership and humanity.

By remaining silent on the numerous allegations that Moore was a pedophile, Saban showed he does not care about the plight or protection of young women and girls.

By remaining silent on Moore’s romanticization of slavery, Saban showed he does not care about the plight or opinions of so many young black men who produce his unearned salary.

Look, that election certainly sparked plenty of talk across the sports world, including TNT”s Charles Barkley campaigning for Jones. And sure, there are arguments to be made for sports figures to weigh in on it if they have something to say, and Modiano makes some good points later on with arguments that Saban should encourage players to vote. But forcing sports figures to take a direct stance on an election isn’t a great idea, and given how divisive that election was, it’s understandable why Saban didn’t decide to speak publicly about it. His job is to coach Alabama’s football team, not tell people who to vote for. Electing to stay silent here doesn’t make him clueless or gutless.