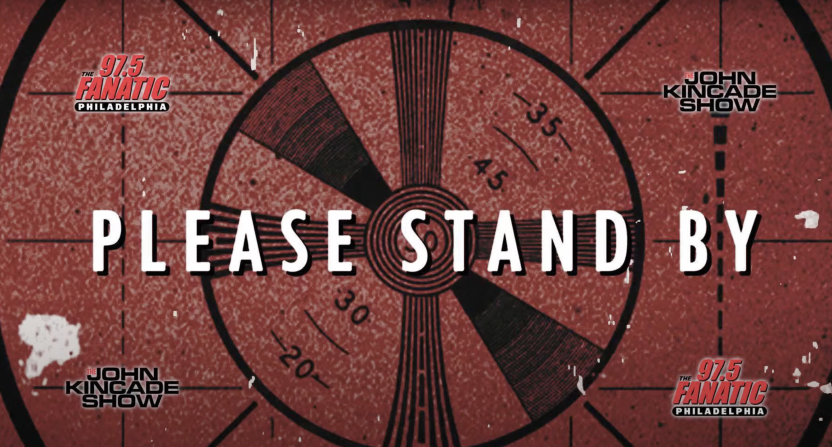 Tuesday morning was a pretty normal broadcast for The John Kincade Show on Philadelphia’s 97.5 The Fanatic. That is until a fire alarm forced the entire broadcasting crew out of the studio and building.

Host John Kincade returned from a commercial break for the nine o’clock hour with plans to discuss the Philadelphia Eagles but flashing lights in and around the studio alerted him to a potential issue. Viewers of the YouTube live stream could also see the flashing lights reflecting off the walls.

“The alarms are going off,” said Kincade. “Hopefully everything’s all right.”

“I don’t recall getting an email,” added co-host Jamie Lynch.

Kincade tried to power through as the lights kept flashing, returning to a discussion around Nick Sirianni’s coaching staff. However, as soon as someone entered the studio to let him know that they needed to vacate the studio and leave the building, that was that.

“We are going to be exiting the building,” Kincade abruptly said and then did exactly that, leaving an empty chair as all that was visible to live stream viewers. In a bit of smart thinking, the station flipped over to the ESPN Radio national feed of Keyshawn, JWill, and Max so that there wouldn’t be dead air for their listeners.

After five minutes or so, the crew returned to the studio and informed listeners that all was well and it was simply a false alarm. Kincade also took the building’s Dwight Shrute stand-in to task over the situation.

“As we were walking back in she said it was a false alarm,” Lynch said.

“They did it on purpose, though, because they were timing us,” Kincade complained. “There’s a woman at the door with her cell phone, and I go, ‘What are you timing?’ She said, ‘The exit of the building.’ Okay, thanks.”