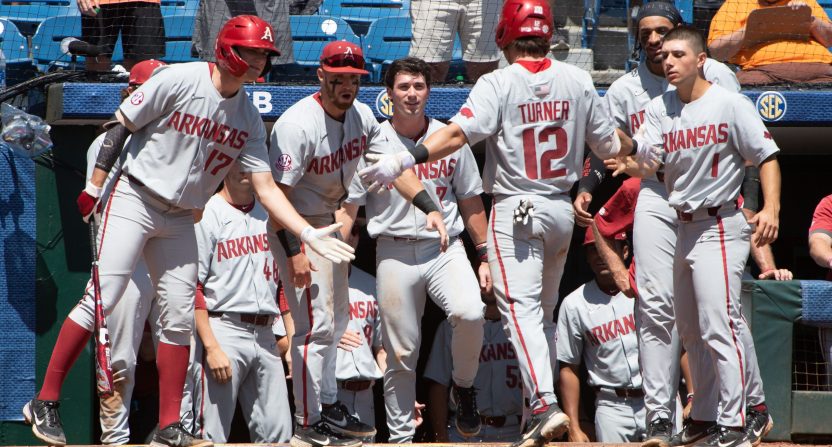 ESPN Arkansas radio host Derek Ruscin found himself in hot water last week after a rant about Arkansas Razorbacks baseball player Michael Turner. After taking some mandated time away from his show, he returned to the airwaves Monday and apologized, though, not without sharing some thoughts on the state of social media and “cancel culture.”

The drama began when Turner, who had been asked why the team had hit a rough patch late in the season, said “it’s not always that easy to play here” and that “if you read Twitter after the game, it can get in your mind a little bit.”

The next day, Ruscin launched into a tirade over the transfer player, saying “you’re not a Razorback, you’re a rental player and have sucked,” that Turner had no right “to come in here and criticize this fan base,” and referred to him as a “stupid ass,” “a disgrace,” and “a loser.”

Northwest Arkansas radio host Derek Ruscin called an Arkansas player a “stupid ass”, “disgrace”, “loser”, ETC. there is absolutely no room for this in Arkansas radio. You’re disgusting and deserve to never have a job on the airwaves @ESPNRuscin pic.twitter.com/YZLfzxFcnn

ESPN Arkansas publicly reprimanded the host and removed him from the airwaves temporarily. Ruscin did take to Twitter the next day to “offer my sincere apologies to Michael Turner and the Razorback Baseball team for my completely inappropriate remarks.”

Ruscin returned to the airwaves on Monday and provided an on-air apology as well.

“Well, I really know how to screw up, don’t I?” Ruscin opened up on Monday’s show. “Like, historic, all-time screw-ups.”

“I want to tell Michael Turner that I am sorry for the words I used about him on this program 10 days ago. I’m sorry. I had an opinion and it was way over the line. I was wrong and I’m sorry about that. And I take full responsibility for all of this that has happened. This is all my fault. And that’s been one of the difficult things about this, is that there is no one else to pass the buck off to here. This is all my fault and I’m sorry.

“You know, what I said was really bad, but, it was also one of the worst sports takes that you will ever hear. Lost in all of that bluster, namecalling, which was wrong, was a terrible sports take. None of the things I said about Michael Turner are true. You can’t get where he gets and be the things I said. Doesn’t happen. They’re not just giving out starting jobs at an SEC school in baseball. Especially this one, one of the top programs in the league.

“And, I mean, good grief, he almost hit the game-winning home run last night against Oklahoma State. So I was wrong twice on this situation. My name-calling and the things I said about him as a player, which none of them are true.”

Stopping there would have been a perfect cap on the entire ordeal and complete ownership of the fallout. However, Ruscin then veered into a little bit of a deflection under the guise of “context,” by implying that his comments were echoed by many other Arkansas fans not speaking into microphones.

“You know people hear criticism and they immediately say ‘well, quit being negative,’ said Ruscin. “I’ve heard this for 14 years. You know, criticism isn’t always negative. Criticism can be the roadmap to better from someone who really cares about the end result. And I want to say this. People have had similar conversations like we’ve had here about players. But you’ve been in a coffee shop or the barbershop, I did it in front of a microphone and everyone heard it.”

And then in a somewhat-ironic departure, the radio host complained about mean people on social media, which is what he chastised Michael Turner for complaining about in the first place.

“You know, at the center of this whole thing, Michael Turner said that it’s hard to play here. Well, I haven’t read it all, but based on the tone and tenor of some of the reactions I got on Twitter, maybe Michael Turner’s got a point,” said Ruscin. “The social media grandstanding over this situation…beyond belief. One person after another trying to score points with the crowd and get their pound of flesh. Some of the stuff said was actually pretty funny. Some of it was really hurtful. Made me wonder how someone 18-23 is supposed to handle criticism when they mess up.”

And then, we ended up where we often do in these situations, with a sprinkling of “cancel culture.”

” I know I can’t mess up again,” said Ruscin. “There are people listening right now, taking notes. They are ready for the next screw-up so they can seize the opportunity and run me out of here. The cancel culture mob is real. The fact remains if I ever talk like that about a Razorback athlete again, I’m done, and they win. It’s not gonna happen again.”

We’re not entirely sure how the “cancel culture mob” wins when you self-inflict something that you’ve admitted yourself was “completely inappropriate” and “way over the line,” but there you go.