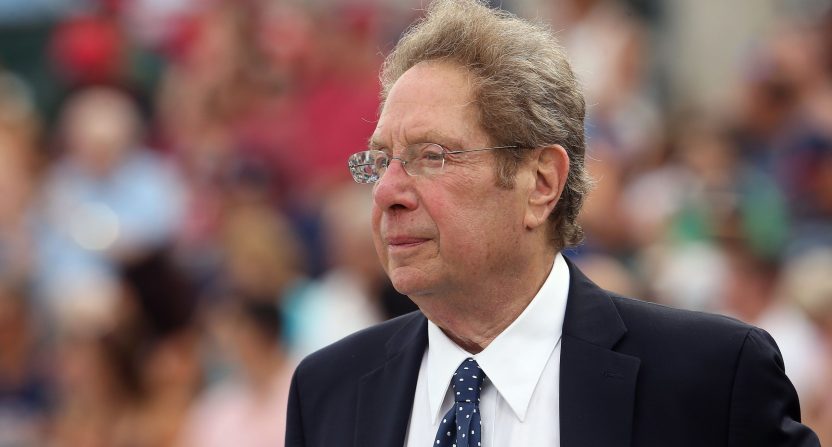 John Sterling isn’t ready to retire from his post as the radio voice of the New York Yankees, but at 84 years old, WFAN needs to start developing a future replacement plan.

According to Andrew Marchand of the New York Post, Brendan Burke is currently WFAN’s leading candidate to replace Sterling, when the time comes. Sterling has been the Yankees radio play-by-play voice since 1989 when he began an incredibly impressive streak of 5,060 consecutive games that came to an end in 2019.

This season, the iron man agreed to a reduced schedule for the first time in his career, skipping a few Yankee road trips for what amounts to about 25-30 games. During those games, WFAN has used Burke, Ryan Ruocco, Justin Shackil, and Rickie Ricardo to fill in for Sterling, joining join radio Hall-of-Famer Suzyn Waldman in the booth.

While Marchand reports WFAN was satisfied with all of Sterling’s temporary replacements, Burke appears to have emerged as the favorite. But a transition doesn’t seem imminent, with Sterling telling the Post he still plans on calling a lot of games next season.

“I’m really happy and I will do as many games as I want to,” Sterling told The Post. “I have to see the schedule.”

In 2019, I spoke to Sterling for Barrett Sports Media, and the Yankees voice scoffed at the idea of retirement, citing Vin Scully who worked until he was 88. This means the 84-year-old Sterling still believes he has a few seasons left, at a minimum.

The leading candidate to replace Sterling, Brendan Burke is currently the TV play-by-play voice of the New York Islanders and does national NHL work for Turner Sports. Among the others who have done fill-in work for Sterling this season, Ryan Ruocco certainly has the name and talent to be a top candidate, but his workload with ESPN and YES Network might make him a less viable option. Burke, however, could potentially keep his hockey job while taking over for Sterling with the Yankees, just as his Islanders predecessor Howie Rose served as a full-time NHL announcer and the radio voice of the New York Mets.

When he was announced as a substitute for Sterling earlier this year, Burke joined WFAN’s afternoon show hosted by Craig Carton and Evan Roberts and referred to the opportunity as his “great white buffalo.”

Although he’s a prominent hockey announcer now, Burke said it was baseball that drove him to a career in broadcasting. Prior to shifting to hockey, Burke also spent three years calling minor league baseball after graduating from college.

News of Burke being the leading candidate to replace Sterling broke on the same day WFAN and the Yankees announced a new multi-year broadcast partnership that will last into the 2030s.