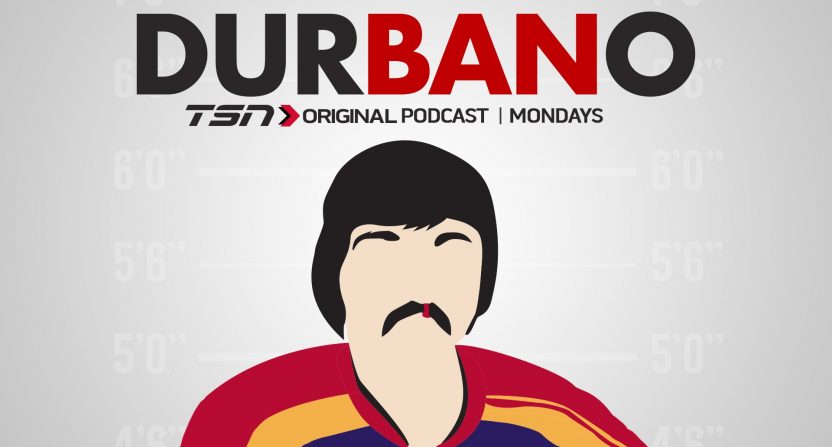 His hockey career was over, and he was dead broke. Steve Durbano can no longer afford his escalating drug habit. His family details the gripping tale of Steve's last smuggling run to South America.

Ep. 3 of DURBANO is available now wherever you get your podcasts. pic.twitter.com/xSoPauBd5x

What’s It About?: These days, hockey is all about speed, power, and finesse. Of course, there’s still a little bit of fighting, but the glory days of the sport’s enforcers are over, especially in the NHL where the product is marketed to families and kids.

It wasn’t so long ago, however, when every pro hockey team had a guy who was there to make sure you didn’t step out of line on the ice and make you understand why that wasn’t a good idea if you did. Steve Durbano wasn’t just one of those guys, he was perhaps the epitome of that guy. The Canadian hockey player’s nickname to some was “Mental Case”, and he earned that name by racking up penalties to the point where he’s still the NHL’s all-time leader in penalty minutes per game despite having last played in the league in 1979.

His AHL, NHL, and WHA career, which spanned the St. Louis Blues, Pittsburgh Penguins, Birmingham Bulls, Kansas City Scouts, and Colorado Rockies, was just the beginning for Durbano. After his career was over, he became a drug addict, a drug smuggler, and ran an escort service before landing in jail. Turned out that no matter what Steve Durbano did, he did it at full speed and without much concern for the safety or well-being of anyone around him.

Who’s The Host?: TSN investigative reporter Rick Westhead, an award-winning journalist who has written for TSN.ca and done reporting on their flagship program SportsCentre. He’s developed a reputation for taking on controversial issues in sports and sports business, which seems to be what made reporting on Durbano so appealing. Before working at TSN, Westhead was a foreign affairs and sports business writer for the Toronto Star.

What’s It Like?: The podcasting business has figured out a pretty solid formula for churning out stories about interesting people who have done some particularly bad things. Whether they’re about sports figures or not, you can pretty much find the same bones located at the center of all of them.

Durbano shares the same skeletal structure as podcasts such as Gladiator: Aaron Hernandez and Football, Inc., Dr. Death, and Carruth. We’re introduced to a central figure who has done something particularly bad and carries a specific reputation with them. We hear grisly details about the things they did and who they did them to. We learn about the things that happened to them that might have made them that way. And we are left to wonder if we need to reconsider who this person really is/was and whether what we thought we knew was the real story or just one aspect of it.

That’s the basically the gist of how the five-episode Durbano plays out. Although, unlike some of those other examples, there’s a critical component missing, or at least misplaced. NHL and hockey fans may be familiar with Durbano’s story, but for the uninitiated, we’re counting on the podcast to give us a reason to find out what made Steve Durbano tick. And somewhere around the third or fourth episode, you realize that you don’t. We’re presented with a lot of shocking details and terrible decisions, but not many reasons as to why we should care about the man at the center of them.

Eventually, we do get reasons that explain why Durbano grew into the man he became and what made him so angry at the world, but that doesn’t come until the fifth and final episode. Had we known some of these details earlier, it might have provided a chance to humanize him and give us reason to want to root for him. Instead, it’s easy to spend most of the podcast wondering why we should bother caring what happens to a man who seems hellbent on cruelty and meanness at every turn.

Why did Steve Durbano behave the way he did?

His personality took shape long before he made it to the NHL. From learning to skate on iced-over roads, to assaulting a policeman, this fifth & final episode explores Steve's childhood.

Available NOW wherever you get your podcasts. pic.twitter.com/cizCPGhGOV

Who Is It For?: Hardcore hockey fans who have a working knowledge of Durbano, or at least the era of hockey that he played in. He’s a throwback in many senses of the word, and his story speaks to a larger story about the way violence and hockey was intertwined for so long. Chances are that if you’ve been around hockey for a while, you know people like Steve Durbano and it’d be easy to understand how a guy like him ended up the way he did.

Who Is It Not For?: While casual fans and people who aren’t hockey fans at all might be interested to hear about the exploits of Durbano, it’s hard to imagine most will stick with it all the way through. Mostly because of the aforementioned reasons that after a while it’s just the story of a violent jerk with no redeeming qualities. And when we do find out more about the man underneath, you’ve either checked out or wish you’d gotten that information sooner.

Where Should I Start: It only makes sense that you start with episode one. It’s not really the kind of podcast you can jump around with. Even though it’s tempting to listen to the final episode early on in order to understand what happened to Durbano, you’d also be spoiling the entire story for yourself that way.

So, Should I Listen To This?: Durbano’s story is an interesting one, and it’s sure to be the kind of thing that hardcore hockey fans will want to know, but it’s hard to recommend it to casual listeners looking for their next true crime or investigative podcast fix when it takes so long to justify the humanity of its subject.