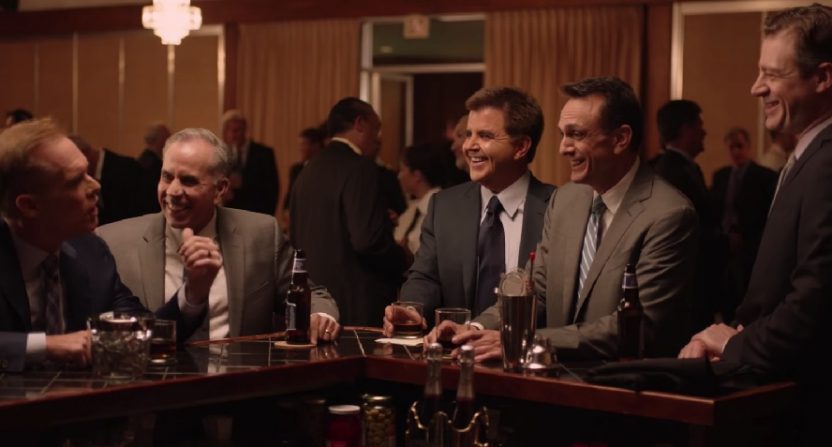 Hopefully, you’ve been watching Brockmire on IFC over the past six weeks. If not, you’re depriving yourself of some great laughs from one of the year’s best comedies. And if you’re worried the show will be a one-season flash, it’s already been renewed for a second season.

But episode seven, which airs Wednesday night, might be the most memorable of Brockmire‘s first season for sports fans and especially those who follow baseball media. Last year, when the series was being filmed, Brockmire generated a bit of early publicity for bringing in baseball broadcasters and writers Brian Kenny, Jonah Keri and Tim Kurkjian as guest stars. One of the core premises of the show is that Jim Brockmire simply doesn’t like Joe Buck, his rival broadcaster who also appears in this episode.

In “Old Timer’s Day,” Jim (Hank Azaria) is invited to the annual “Mack & McGraw” dinner which honors broadcasters. Brockmire is hesitant about attending, given how his career has spiraled downward and worries that he’ll be held up to ridicule — or worse, due to his feud with Buck. But his girlfriend Jules (Amanda Peet) convinces him to go, knowing how much attending the dinner means to him. Here’s a clip:

Using real-life broadcasters gives Brockmire a sense of authenticity, creating the sense that Jim was at one point considered one of baseball’s best announcers and flushed away a potential Hall of Fame career by bringing his personal issues into the booth and airing them out for his audience to hear (and later, for YouTube viewers to see).

But despite his many flaws — notably his drinking problem and throwing colleagues under the bus to advance his own career — Brockmire is still loved and respected by his peers. Or they know that a party is much more fun with Brockmire poking fun at colleagues, popping their balloons and saying what others don’t dare to say after he’s had a few drinks.

While there might be some slight exaggeration, it’s easy to imagine these people really hanging out together and having these conversations. (OK, maybe Kenny’s conversation with Jules isn’t based on a real interaction. Or is it?)It feels real, which is one of the reasons Brockmire is so enjoyable. The show might exist in a warped version of our world and takes a comically raunchy look at the life of a baseball announcer working in the minors, but the characters pull you in.

Brockmire airs on IFC Wednesday nights at 10 p.m. and can also be seen online at IFC.com or with the IFC app.