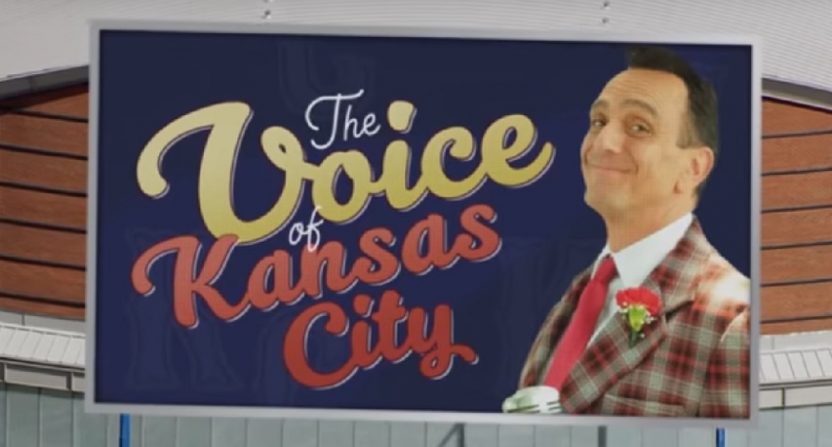 At first glance, the premise for IFC’s new comedy Brockmire (which premieres Wednesday at 10 p.m. ET with its first two episodes) is something that may have been better suited for the occasional comedy sketch or short film. What are the men whose warm, velvety voices call baseball games for us like in real life? Do they always talk the same way they call play-by-play and tell stories during baseball telecasts, when doing something as mundane as ordering lunch or as absurd as insulting someone with profanities?

Plenty of stand-up comedians have likely used this at some point in their routine. What would a classic, old-time baseball announcer sound like when ordering a pizza? Or having sex? (Hopefully, few comedians used a voice as hallowed as Vin Scully, Ernie Harwell or Jack Buck for their imagined situations. There are lines that just shouldn’t be crossed, even in stand-up comedy.)

Sure enough, Hank Azaria’s character of baseball announcer Jim Brockmire began as a sketch for Funny Or Die. The documentary-style bit featured interviews with actual broadcasters like Dan Patrick, Rich Eisen and Joe Buck, speaking with reverence about the one great baseball voice that’s never mentioned among the legends of the sport, despite his influence throughout the industry and his quirky references. He never got over having a meltdown on the air after finding out that his wife, Lucy, was cheating on him. Brockmire was fired and deemed unhireable after the profanities and insults directed at his wife on the mic, and was reduced to calling play-by-play to himself on sandlots and public bathroom stalls.

That four-and-a-half-minute sketch gets stretched out to eight half-hour episodes for IFC. But the premise doesn’t become thin at all. Rather, expanding the premise of a washed-up baseball announcer who had a catastrophic breakdown and is now trying to work his way back into the sport at the lowest of minor league levels leaves plenty of spaces for Azaria and writer Joel Church Cooper to fill in character and story details, while building out the setting of the series.

The pilot episode provides a new, fuller version of Brockmire’s on-air meltdown while also providing some context. Jim Brockmire was indeed one of baseball’s most treasured broadcasters, billed as “The Voice of Kansas City.” As the story begins, Brockmire is calling a game between Kansas City and Boston (no MLB names or logos here, as you might expect) and appears to be enjoying a little bit of whiskey while at the mic.

The story of the series picks up in the present day, 10 years after Brockmire’s breakdown and exile from baseball. He’s trying to resume his career by starting at the very bottom, hired as the new announcer for the minor league team in Harristown, Pennsylvania. Team owner Julia James (Amanda Peet) somehow found him in Bangkok, where he’d been calling cockfights and enjoying illicit substances with the company of the local personal services industry.

Nicknamed the Frackers (“a very stupid name for a baseball team,” as Brockmire puts it) after the only industry the town really has, the ballclub is in dire shape. James grew up rooting for the team, which her father played for, and has ambitions to turn the club around, which will in turn help revive Harristown. Unfortunately, she sunk everything she has into buying the club, taking out a ridiculous loan that will surely bury her. The roster is an absolute mess, stocked with several morbidly obese batters (who get on base with their bellies hanging over the strike zone and getting hit by pitches), a few young hopefuls and one slugger, Pedro Uribe (Hemky Madera), who can crank out some home runs but has clearly lived a very hard life. (He says he’s 29 when he looks 49.)

But James hopes the main attraction will be Brockmire, who will call the games over the public address system. Yes, Brockmire’s play-by-play and commentary will be piped directly into the ballpark. To hear the former broadcasting great, fans will have to buy a ticket to the game. The Frackers have no local radio contract, so Brockmire’s play-by-play and the games are broadcast over the internet via smartphone by the team’s resident whiz kid, Charlie (Tyrel Jackson Williams), who has the most Twitter followers in town and four million Vine loops. Naturally, that means nothing to Brockmire, who missed most of the internet revolution while traveling the world to forget his sorrows, drown his pain in booze, and call any sport anywhere that will have him.

With his signature plaid jacket and warm, smooth broadcasting voice (which Azaria has refined since the Funny Or Die short into something that is easy to imagine on an actual baseball broadcast), Brockmire was already an anachronism. But the series presents him as a man out of time, returning to adapt to the world he left behind. Think of him as Captain America without the muscles (though Azaria is in great shape, which he demonstrates with a naked run around the bases later in the series) and superheroics. While Brockmire was gone, he became an infamous viral sensation, his meltdown providing fodder for countless memes and Urban Dictionary entries. (To “Lucy” someone means just what you think it might.) People came to admire him for his candor. Telling the brutally honest truth is to “Keep it Brockmire.”

Azaria is fantastic as Brockmire, using his beautiful broadcasting voice in the most warped situations, such as calling play-by-play of a sexual encounter or telling someone that he doesn’t like him just by looking at him. Yet underneath the absurdity, you can see the pain in Azaria’s eyes. Brockmire is a guy whose world fell apart and lost what should have been one of the great careers in his industry. The show isn’t just all about its main character either. Taking place around a baseball team, the sport and culture of a team mines that for story material, as in one episode that deals with a kangaroo court that threatens to tear the club apart.

The show is raunchy and wrong in so many places, yet just so damn funny. It’s truly worth your viewing time. Brockmire premieres on IFC with its first two episodes at 10 p.m. ET, Tuesday. You can also view the pilot episode online at IFC.com or YouTube.