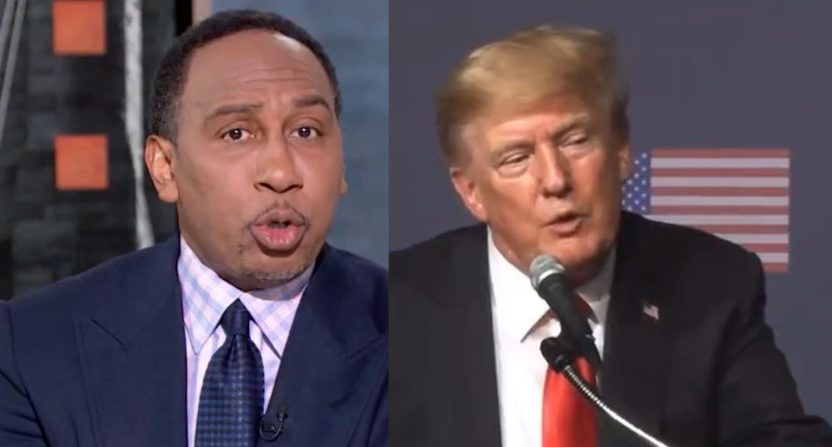 When Smith embarked on an epically long media tour to promote his newly launched podcast Know Mercy for Audacy earlier this year, the ESPN host promised he wouldn’t stick to sports. A little over three months into his tenure as a podcast host, Smith has kept that promise.

On the heels of the January 6 House select committee releasing its final report, recommending Trump be prosecuted and banned from ever serving in office again, ESPN’s foremost personality on sports couldn’t help from weighing in on the former president on Friday’s episode of Know Mercy.

“Just months ago, he was an absolute lock for the Republican nomination for the presidency of the United States in the year 2024,” Smith said on his podcast. “I think it’s safe to say that that’s in a world of trouble. That’s in a world of jeopardy. And that, ladies and gentlemen, in my mind, is a cause for celebration.”

Smith proceeded to break down the potential matchups of Trump vs Joe Biden, Trump vs Ron DeSantis and DeSantis vs Biden as if he were breaking down LeBron James vs Kevin Durant.

“Here’s the one thing I would say in Trump’s defense,” Smith warned. “Be careful what you wish for.”

Trump’s various bankruptcies, the lawsuits against him, his affinity for insults, battles with the media, massive role in January 6 and all around toxicity gives both Democrats and Republicans cause to vote against him. But according to Smith, DeSantis doesn’t garner that same vitriol.

“Be careful what you wish for particularly if you’re on the left,” Smith said. “Because a guy like DeSantis, the only thing he gives you to attack is his record, but tens of millions of people are gonna side with that…they’re viewing him as the grown-up version of Donald Trump. And because of that, when he runs, he’s not the easy target Trump is.”

When Smith launched his podcast earlier this year, it was surprising to see him go outside ESPN to do it. But after Smith explained his podcast wouldn’t stick to sports, it became clearer as to why he sought a platform other than ESPN to host it.

ESPN is a company that suspended Dan Le Batard for criticizing one of Trump’s racist rants and later sent a notice to employees reminding them of their policy to avoid politics on-air. Smith, however, appears to supersede ESPN’s ‘stick to sports’ mandate. And even if they don’t want him to talk about something political on their airwaves, they’re willing to let him talk about it elsewhere.

Smith clearly has aspirations that go beyond talking about sports on ESPN. And ESPN might recognize that if they want to keep Smith beyond his current contract, they have to allow him the opportunity to pursue those aspirations. Even if it means talking about polarizing social and political issues for another company.