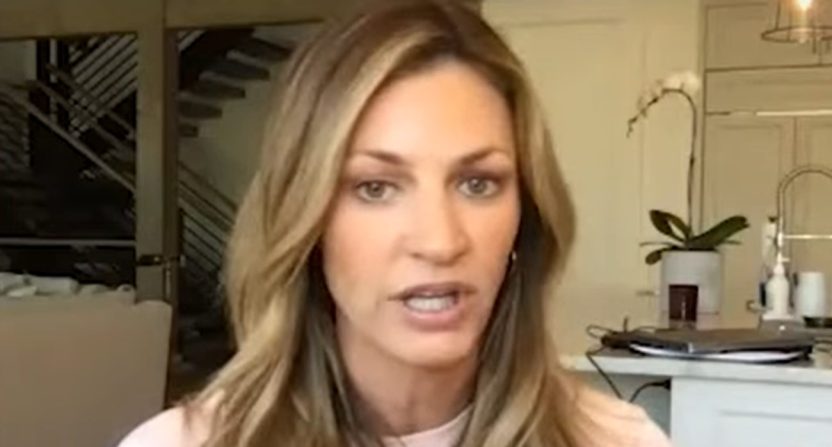 When Joe Buck and Troy Aikman bolted for ESPN’s Monday Night Football booth, Erin Andrews knew Fox would respond with a splash. But she expected their hire to be Peyton Manning rather than Tom Brady.

Andrews joined Jimmy Traina on the latest episode of the Sports Illustrated Media Podcast, and the Fox sideline reporter offered her recount of the unprecedented seismic shifts to the NFL broadcasting scene this offseason. According to Andrews, she thought Fox might be hiring Manning. But she was the one who actually first reached out to Brady, gauging his interest in filling the void left by Aikman.

“At this time, Tom was retired,” Andrews recalled. “I may or may not have put a text out there or a DM or whatever and just said, ‘hey, what are you doing next year? You wanna come be a part of our crew?’”

In addition to her DM to the 44-year-old quarterback, Andrews said she called one of her bosses at Fox to suggest putting a call in to Brady. Although it seems like she may have been the one who planted the Brady to Fox seed, Andrews believed it was going to be Manning who ultimately replaced Aikman.

Manning has made it clear that he doesn’t have an interest in calling games, previously turning down multiple offers from ESPN to do so. Instead, he chose to launch the Manningcast, which he can do more casually and from the confines of his own home. Despite Manning’s apparent lack of interest in joining a booth full-time, Andrews still believed he could end up at Fox.

“I just wasn’t believing everything I was reading,” Andrews continued. “And I knew Fox was swinging for the fences and I just got that sense. I never for once thought it was Tom.”

Most people assumed Manning wouldn’t be interested in Fox after he batted away previous offers from ESPN. But most people also assumed Brady’s future wasn’t in the broadcast booth either. Ultimately, $375 million and the opportunity to remain around the game lured Brady to the booth, for whenever he finally decides to retire from playing.

And as far as working with Brady goes, Andrews is excited. But she’s focused on the current season first, which will see her pair with Kevin Burkhardt and Greg Olsen on the lead NFL broadcast for Fox.

“Tom has been very, very, Tom-ish in it, PC,” Andrews said of Brady since reaching a deal with Fox. “He’s just like ‘Listen, I’m excited, but not now’. And I appreciate that from him. He’s like, ‘I can’t worry about that right now,’ and he’s not,”

Uh-oh. Tom being “Tom-ish” is exactly what his critics are concerned about when they question his credentials as a broadcaster. The quarterback who has spent more than two decades attempting to avoid saying anything interesting when speaking to the media will soon have to be less “Tom-ish” if Fox is going to be satisfied with the historic contract they gave him.