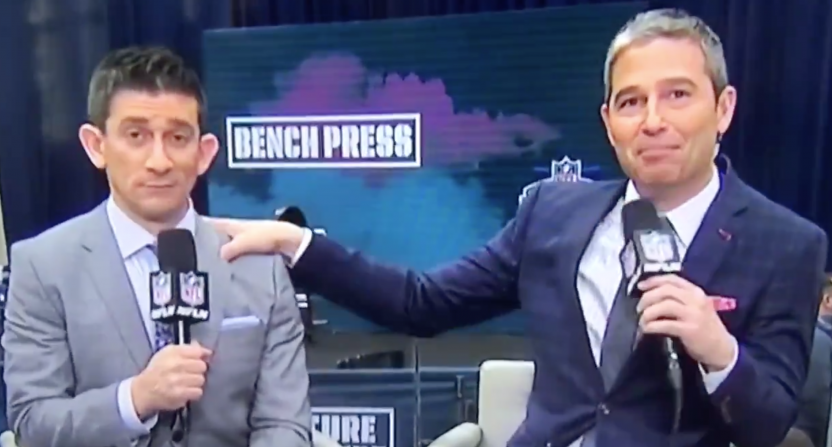 Awful Announcing has evolved and grown a lot as a blog over the last decade. Seriously, have we actually made it this long? Do sports blogs even still exist anymore?

But at AA’s core has always been those bloopers and blunders that make us laugh, squirm, cry, or do the blinky eyes GIF thing before we even knew that was a thing.

With the end of the 2010s upon us, we wanted to take a stroll down memory lane and relive some of our favorite moments from the past 10 years, when carefully crafted and finely-tuned sports broadcasts turned awry and gave us the gift of sweet, sweet content that has miraculously sustained us all these years.

There are many bloopers that probably could have and should have made this countdown that we’ve missed. But just blame it on 10 years of keeping track of fake sports debates.

Frequently – The battle of the bulge

What are the two most frightening words for a sports broadcaster? Clearly, they have to be “bulging disc.”

Steve Levy’s Freudian slip when talking about an injury to Patriots cornerback Maurice Hurst all the way back in 1995 may be one of the most iconic broadcast bloopers ever. And yet, somehow in spite of the known danger to broadcasters everywhere, it’s been repeated many times over the last decade. Here are four notable occurrences:

This clip from England’s Soccer Saturday, a fast-paced live reaction show to all the soccer taking place around the country, has been viewed millions of times around the globe this decade.

Beloved former player and media personality Chris Kamara was cued up to deliver a report on a red card live from the Portsmouth-Blackburn game. What happened next was an SNL skit brought to life and pure comedic entertainment.

The best pure announcing meltdown of the decade happened all the way back in 2010 when Florida Atlantic announcer Dave Lamont had a sliiiiiiiiight disagreement with the officials over a hit delivered to the Owls’ quarterback. His anger over the no-call then evolved into challenging the conference commissioner, pounding the table, screaming at the top of his lungs, and then literally challenging everyone in the press box to a fight.

Here’s a picture of that moment from the FAU press box: 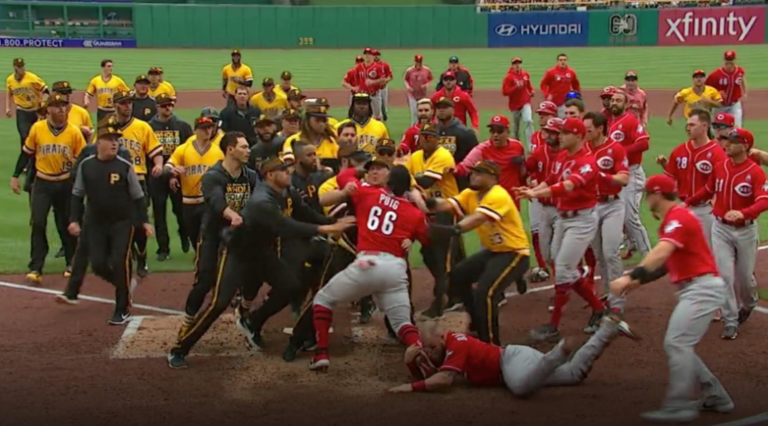 College GameDay‘s influence on sports media — and analyst Lee Corso’s legacy, in particular — can’t be overstated. GameDay has set the bar for studio shows for years. And in that time, Lee Corso has made over 300 headgear picks.

While a random SMU-Houston matchup from 2011 may not be the most memorable site visit in the history of GameDay, Corso’s theatrics for his headgear pick reached an all-time high that day.

What a weird decade it was for sports talk radio legend Mike Francesa. The Sports Pope came and went from national television on FS1, retired and then unretired from WFAN in New York, had his every flip-flop chronicled on social media, and even had a convention dedicated to him.

But what will we remember most from Francesa in the 2010s? This moment when he appeared to fall asleep while live on the air talking to colleague Sweeny Murti about the Yankees. That and this epic interview where he tried as hard as he could to learn about soccer.

2012 – Marty Reid forgets who he is working with

Believe it or not, former racing announcer Marty Reid was actually relieved of his duties at ESPN in 2013 for botching the finish to a race and calling the end too soon. It wasn’t his first blooper reel moment, though.

The year before in 2012 at Indianapolis, Reid somehow forgot the name of his broadcast partner, former crew chief Andy Petree, live on the air, in a moment that seemed like it was out of a Curb Your Enthusiasm episode.

Life, in many ways, is about timing.

Once upon a time, Chris Berman moonlighted as a play-by-play announcer for ESPN’s Week 1 Monday Night Football doubleheader to decidedly mixed reactions. Berman was actually attempting a serious discussion about current events in the league coming just after the Ray Rice video was made public and one second later, became a social media meme.

Many all-time great coaches and players in sports made for not-so-good television analysts. Bob Knight was one of them, which must have come as a shock given his warm and approachable personality over the years.

Amazingly, while calling a game for ESPN during 2015, Knight chastised fans for apparently standing in his way and not sitting in their seats during live game action. He just broke the fourth wall right there in the middle of the broadcast! Knight’s worldview about chairs must have really changed over the years.

There’s no discounting Dick Stockton’s status as one of the all-time greats in the industry. And when you’ve been on television as long as he has, perhaps there’s bound to be a few bloopers in there somewhere.

In 2017, Stockton took this promo read for the Fox halftime show a bit too literally and gave us a hysterical Ron Burgundy-inspired moment.

Dallas Cowboys tight end Jason Witten had a tumultuous one-season run as lead analyst for ESPN’s Monday Night Football. ESPN was trying to duplicate the success that CBS had with pulling Tony Romo straight from the playing field to the broadcast booth, where he became one of the top analysts in sports.

Unfortunately for ESPN, Witten wasn’t Romo and had his share of blooper reel moments. Fittingly, one of Witten’s last acts as an ESPN analyst was to break the Pro Bowl trophy while presenting it to the winning AFC team.

How can one moment contain so many metaphors? Witten returned to the Cowboys this season in a move that probably worked out for the best for everyone.