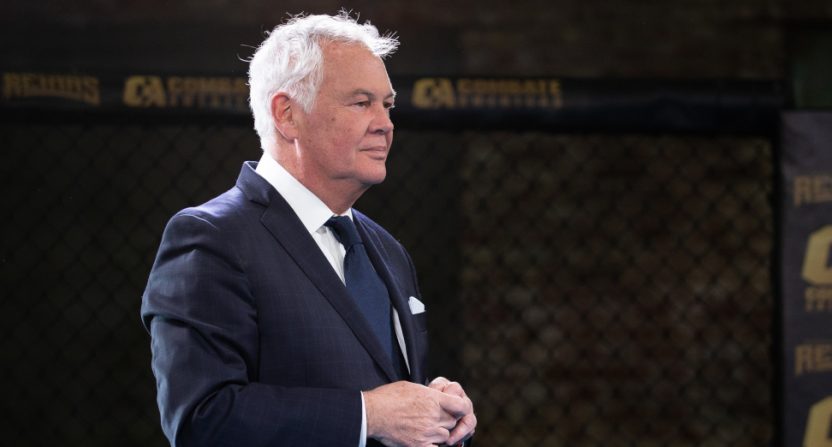 Since Combate Americas’ founding in 2011, the MMA promotion has found plenty of success, including ratings for a June event that edged both UFC and Bellator events on the same weekend. But they have an unconventional approach, focusing primarily on younger fans who are new to MMA. Combate Americas founder and CEO Campbell McLaren (one of the original co-founders of the UFC) spoke to Awful Announcing recently, and said their goal is to bring those new fans into the MMA world.

“Combate Americas’ mission is to reach out to new fans that have not been well-served by the existing MMA organizations, UFC and Bellator. I think we have brought a form of MMA that’s been very exciting, we have something like an eighty percent finish rate to our fights, a lot of first-round endings to our fights, new fighters and exciting fighters. And it’s geared for folks that don’t necessarily have a deep knowledge base; we’re very fan-friendly, we like to explain things. On the Spanish side, we’ve got Gastón Reyno who fought for Bellator and then came over to fight for us, and Julianna Peña on the English side who does fight for the UFC and does our commentary, so we’ve got these two great on-air commentators who are really good at explaining what’s going on.”

“So our mission is to present very fast-paced MMA that’s much more entertaining. We say MMA stands for ‘Much more action.’ Fast-paced entertaining fights, exciting new fighters, and being fan-friendly to the folks that don’t know the sport very well. I think I’m the only one in our business, in the U.S. certainly, that’s bringing new fans to the sport.”

McLaren (seen above at a Combate Americas event) said he appreciates and respects the UFC, but thinks they have a different and more-established audience.

“You know my background, I did help create the UFC, so I love the UFC…I go to the UFC events a lot, I talk to Dana [White] when I’m there, so this isn’t a knock, they’ve got a great and established fanbase. But when I met with Dana White and Lorenzo Fertitta, back when the Fertitta brothers still owned it, I said ‘I’m not going to take fans away from you guys, I think I’m going to bring in new fans. And they admitted they didn’t do a good job with the Hispanic audience.”

He also said he doesn’t think it’s possible to go head-to-head with the UFC for their audience.

“My vision for the UFC was that I got put in touch with Rorion Gracie and I wanted to do a reality version of Mortal Kombat, that was my creative idea. And it worked out pretty well, John McCain aside. And I think the UFC is nearly perfect for what it is, I really do. I didn’t want to compete with the UFC. First off, if you had $1 billion, that is probably not enough money to compete with the UFC; they’re so established and they’re so good at what they do. I didn’t want to recreate that. Combate, my feeling is very different; I think it’s reinventing MMA, I think it’s reenergizing MMA. We’re presenting it in a way that is correct for young people today.”

McLaren said the Nielsen numbers Combate Americas has received speak to their success in finding that younger audience that isn’t already watching MMA.

“We’ve commissioned Nielsen to do very deep dives on our audience. Preliminary research from the Univision audience was over 90 percent didn’t watch MMA before Combate, so that’s pretty spectacular. Univision also has an established reputation for being an unduplicated audience, folks watch things on Univision they don’t watch other places. So I think Univision’s unduplicated audience base and the fact that we’re fan-friendly to new fans, that’s what I think is growing it. So when you see the half a million, 400-500,000 people at midnight, spectacular ratings, if you keep in mind that those are new fans, I think that’s a particularly powerful statement to Combate’s success. It’s not only our fighters that are the future of the sport, our fans are the future of the sport.”

He said Combate Americas’ focus on quick fights also helps sell it to a younger audience.

“When I did the UFC 25 years ago, we attracted a lot of young people. But our TV research says our average age is 27 and the UFC’s average age is 47. So our audience watches things on the phone, our championship fights are three rounds, we’ve been experimenting with one-round, five-minute fights because young people like highlights rather than the whole thing. I think what I wanted to do was just re-imagine the whole sport of MMA and not just say that, but actually present a very new and different product. And I think that’s something I’ve accomplished.”

And while their main focus is Hispanic fans, McLaren said they’ve also found some success attracting an English-speaking audience, particularly with their deal with DAZN. He thinks their fights are appealing to younger English-speaking viewers as well.

As per the demographics for in-person attendance of their events, McLaren said those tend to reflect whatever area they’re in.

“It’s evolving. We’re on in Mexico and our partner there is the biggest TV network in Mexico, so we’re very Hispanic in Mexico. We’re on in Spain and beat the UFC and Bellator in the ratings in Spain, so that’s pretty Spanish-speaking. Here, I think it sort of depends on the market. When we go into Los Angeles, we were at USC’s Galen Center for our last event, I think that was predominantly Hispanic, but certainly not all. When we go down to Hidalgo, Texas, everyone there is Hispanic, so I  think it’s predominately Hispanic. I think it reflects America and the cities we go to; San Antonio’s a mix, Fresno’s a mix. When we get into the more heavily Hispanic areas, we tend to see a higher percentage of Hispanic folks.”

But with both viewers and attendees, McLaren thinks there are some inaccurate assumptions out there about who’s watching.

“There’s no demographic that says Combate is poorer or more street or anything like that. It’s definitely more Hispanic, but like MMA demographics in general, our sport has an affluent customer base, disposal income, younger, two-plus years of college. It’s amazing that people think MMA is some kind of low-rent operation.”

McLaren said Combate is also thinking long-term by focusing on younger fighters who are poised to become big stars.

“Fighters come into their prime around 28 years old, and my guys are 22, 23. In two or three years, these guys are going to be the best in the world. If they went into the UFC right now, they’d be outfought, because they don’t have the experience. But what we’re going to see in 2020, 2021, you’re going to see the Combate athletes being at the top of the game. So it’s new athletes, it’s an exciting style of MMA, there are different styles of MMA and ours is “Mucho mas action,” and that’s very friendly towards new fans and that’s what I think we’re doing.”

“Our trajectory is pretty apparent. …Our goal is to be the number-two sport in the world for Hispanic sports fans. The number one is soccer, or fútbol everywhere outside of the U.S….So we want to be the number-two sport for Hispanic sports fans behind fútbol . That’s a billion people, a lot of people; Spanish is the second-most spoken language in the world; Mandarin, then Spanish. So here I have a sport that is relatively new to Spanish-speakers, that plays in very well to the boxing traditions of Hispanic sports fans, Puerto Rico, Mexico, Argentina, Spain, great boxing traditions. And I think we’re rapidly on our way.”

He said a recent event they did in Peru helped illustrate the potential global appeal their promotion can have.

“We did an event in Peru in May. We’d never been to Peru, I’d never been to Peru. And we went to Lima; three weeks promotion, smaller venue, almost 4,000 people 3,800 seats. Place was filled, we did 10 times the TV ratings on Movistar that they normally do in that time slot, and had the most exciting event possible. I think that speaks to what we can become in the Spanish-speaking world, including the U.S.; I think we can be the number-two sport behind futbol. That’s where I think we’re going to be.”