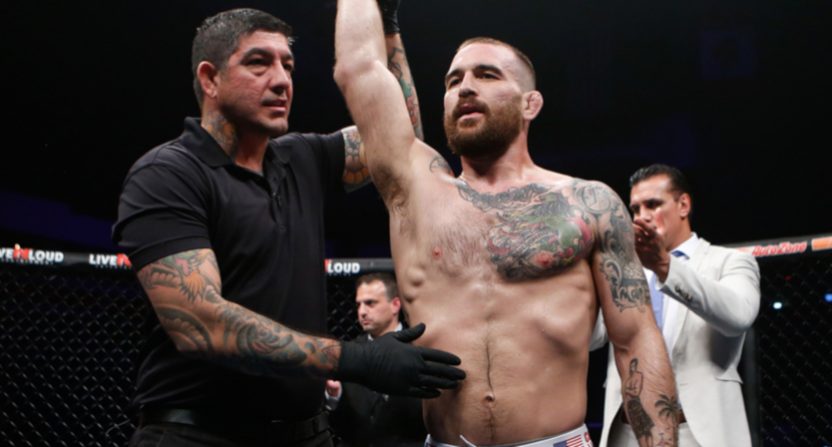 The largest average MMA audience of last weekend came not from the UFC or Bellator, but rather from Combate Americas. We’ve covered the Latin fighter-focused MMA promotion a bit over the years, and they posted some impressive numbers for their card in Hidalgo, Texas (which aired at midnight Eastern Friday on Univision), averaging 416,000 viewers and beating both UFC and Bellator broadcasts Saturday (which drew 413,000 and 386,000 in Saturday afternoon and Saturday primetime respectively). Here are some highlights from a release they sent to Awful Announcing:

“The ratings for the latest Combate Americas live television show on Friday night confirm what we’ve known – combat sport fans prefer ‘Mucha Mas Acción,’ and our style and brand of fighting which is the best of old-style unpredictability combined with new generation MMA,” said Campbell McLaren, Combate Americas CEO. “Young adults especially recognize our bouts have more action, drama and entertainment than any other MMA organization and Combate Americas has, as a result, become appointment television.”

Combate Americas dominated the other general market leader, Bellator, by a far greater margin – more than 30,000 viewers – despite Bellator’s advantage of airing in primetime at 9 p.m. ET on the Paramount Network on Saturday, June 22.

Friday’s telecast was also the second highest rated show in its time slot for the week on any Hispanic television network.

Of course, there are a few other things to consider there. As Dave Meltzer noted at MMA Fighting, both the ESPN and Paramount Network events were buildups to bigger fights that were only available via streaming in the U.S. (via ESPN+ and the Bellator app respectively), and the UFC prelim number there was the lowest number of viewers for a UFC event on ESPN to date (aided by a card many viewed as lackluster).

This is not the first time Combate Americas has beat Bellator. They also did that in April 2018 (583,000 viewers combining Univision and Univision Deportes, 402,000 on Univision alone, versus 403,000 on both Paramount and CMT for Bellator), and did so again in December 2018 with the eight-fighter “Copa Combate” tournament. And they’ve been getting some good buzz lately, especially with the signing of former UFC light heavyweight champion Tito Ortiz in April. Combate Americas also pulled in 421,000 viewers for a June 7 event. Meanwhile, the 386,000 audience Bellator pulled Saturday was actually their best number since January 26 (when they drew 697,000). That’s led to McLaren making comments like “Bellator is smaller than Combate Americas.”

It’s worth considering that the biggest fight in that Bellator event was not shown on TV and that this was a particularly small number for UFC prelims (driven by that particular card). But even with that, this was still an impressive result for Combate Americas. We’ll see how the ratings progress for that promotion going forward, but this weekend certainly worked out for them.