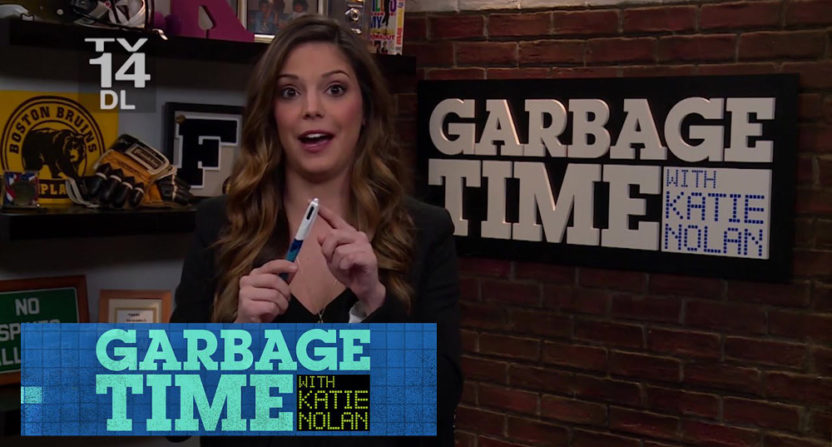 One of the more curious sports media storylines out there recently has involved Katie Nolan, whose Garbage Time show was “not renewed in its current format” back in February. At that time, Fox PR issued a statement that “We could not be more excited about Katie Nolan’s future with FOX Sports and we look forward to further developing her role at FS1,” but there’s been no public development of that role since then, and media reporter Jim Miller tweeted in July that Nolan was likely headed for ESPN, possibly even before her Fox contract expires at the end of the year.

Nothing’s still actually happened, though, at least visibly, so for now, it looks like Fox is paying Nolan not to do anything. Nolan’s contract and future was discussed in depth on Richard Deitsch‘s most recent SI Media Podcast with Chad Finn of The Boston Globe and John Ourand of Sports Business Journal, and they had plenty to say about what’s going on with her (starting around 41:50):

A key part there comes from Deitsch and Ourand’s initial comments on how odd it is that Fox isn’t currently doing anything with Nolan despite playing her up publicly and saying she’s a big part of their plans. Deitsch said “Fox Sports 1 comes out saying ‘Yes, Katie Nolan’s Garbage Time is canceled, but she’s going to be on the air so much you’re not going to be able to miss her. We’re going to make her a major star. She’s going to be on every platform that we have. Blah blah blah blah blah. I don’t know if that was [since-fired Fox Sports president of national networks Jamie] Horowitz or somebody else.

“So that was February, and now it’s the middle of August. I have not seen Katie Nolan on the air with the exception of some one-offs, I think she went to South by Southwest and they did like a week of shows with her. So the point is, we were told by Fox Sports executives she was going to be on the air, she’s going to be front and center, and we have not seen it. So let’s be blunt…that was absolute bullshit by them. So I’m trying to figure out, as clearly her contract comes to an end, and John, maybe you can explain this as you’ve covered this longer than I have, why would you not use a talent that you are paying money to on your network that is struggling for ratings?”

Ourand responds “It makes no sense to me whatsoever, unless they don’t have anything in New York and she doesn’t want to leave New York. But I don’t pretend to know anything about the situation other than ESPN likes Katie, I know that Fox appeared to like Katie, and for some reason her and Fox have not been able to figure anything out. And it does suggest that when her contract’s up, she’s got to be leaving Fox, right?”

Deitsch says “I would think so,” and they then discuss if she’s been linked to Mike Greenberg’s morning show (along with many others). Deitsch then says “I do know some very high up people at ESPN who can make things happen for anybody are fans of hers.” Ourand says “Oh yeah, I don’t know if you’re under embargo or whatever, but [new executive vice-president, content] Connor Schell loves her, he would love to do some sort of studio show with her. …But there’s no deal to be made, she’s still under contract, and he’d like to do a bunch of shows with a lot of people.” Deitsch then says “Correct, he’s one. I actually have some other sourcing there. He definitely does like her, but there are others in positions of financial power.”

The conversation proceeds from there, with them talking about how Nolan would need to find the right fit at ESPN, which might not necessarily be either Greenberg’s show or the Around The Horn/Pardon The Interruption/Highly Questionable rotation of shows produced by Erik Rydholm. Ourand brings up that there might be online outlets interested in Nolan too, possibly including Bleacher Report. All of those efforts might offer more creativity, but perhaps less visibility.

At 47:40, Finn weighs in and discusses the January 2016 Boston Globe magazine profile he wrote on Nolan. And he opines that Nolan currently not doing a show is a decision by Fox in line with ESPN’s approach of paying laid-off talent not to work for competitors.

“I get the sense that they got wind she wasn’t going to stick around, so they’re kind of following the ESPN model of burying people that they know either they don’t have long-term plans for, or that person doesn’t have long-term plans for them. By that I mean when ESPN lays off all these people, they sort of vaporize for a while. You don’t see Marc Stein tweeting because what’s left on the contract becomes invalid and they don’t get paid if that happens. Katie’s not in the exact same situation over at Fox, but you get the sense they’re trying to make her sort of out of sight, out of mind in a way, knowing that she’s going to have a lot of possibilities outside of their operation.”

Finn goes on to discuss how Nolan might partner with Bill Simmons at some point (although probably not right now, especially as he doesn’t currently have a HBO TV presence), and then they talk about how Nolan’s poor FS1 ratings don’t necessarily mean much given her timeslot, minimal promotion, and FS1’s overall audience struggles. Ourand later says (around 49:58) “To me, it goes beyond ratings. It’s about talking with people who make decisions to hire talent, all of whom support Katie and speak well of her. Literally 100 per cent.”

So yeah, it seems likely that Nolan will get a high-profile gig once her Fox deal expires, and it will probably be at ESPN (but just what she’ll be doing is up for debate, and there could be other possibilities too). In any case, it’s certainly interesting to hear some connected media reporters weigh in on the unusual approach Fox has taken with Nolan, and on what might be next for her. And it’s interesting to hear them go in so hard on the way Fox said they were going to promote Nolan and didn’t. Perhaps that’s a cue for network PR to be a little more accurate with their statements.