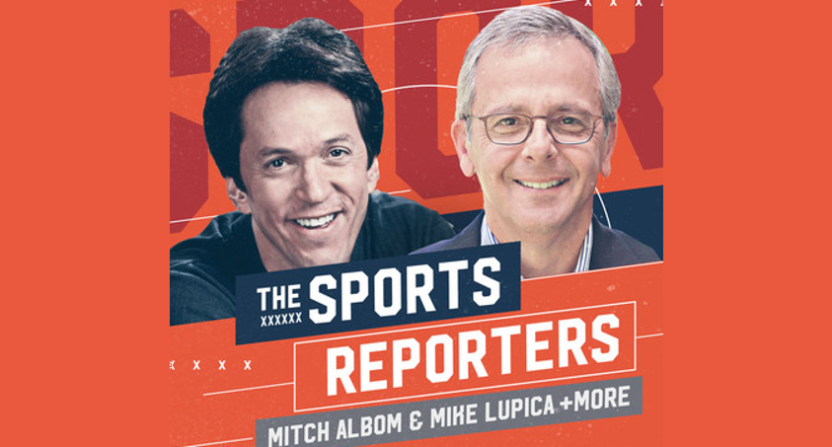 What Is It?: It’s a revival of the long-running ESPN Sunday morning show of the same name. This time around, it’s audio-only and there are just three panelists.

Who’s The Host?: Mike Lupica and Mitch Albom, two sportswriting legends and regular panelists on the TV show, lead this revival. They are joined each episode by a recurring third host. For the first two episodes, Christine Brennan has been the third panelist.

Lupica replaced the late John Saunders as the TV show’s host during its ultimate end. While no one could adequately replace Saunders, the rumors are that Lupica is the reason the show didn’t make it to 30 years. Albom, a fantastic writer known for work that goes well beyond sports, has gotten in trouble for some recent opinions.

What’s a Normal Episode Like?: Episodes drop each Monday and Friday, coming in at just under an hour apiece. The three hosts are like panelists, with each person sharing opinions backed by evidence and explanation. Each person passes the baton to another, who gives their own nuanced take on an issue. Considering it’s The Sports Reporters, this sounds normal. But there’s no facilitator or mediator among the group. Both Albom and Lupica are too opinionated and too eager to share their opinions to give a good Tony Reali impression à la Around the Horn.

At the end of the show, each panel member gives his or her “Parting Shot,” a short monologue based around a personal take on some issue in sports.

Who Is It For?: In some ways, listening to this show kept making me think of Unmuted, the Jay Mariotti and Woody Paige podcast I reviewed and found almost nothing to like. While this show is nowhere near as gross as Unmuted, it also feels like it exists more for nostalgia than as a podcast revolution. I grew up on The Sports Reporters, though I never knew the Dick Schaap era. When I knew the show, it was still really good, but it was one of many sports opinion shows, not the sports opinion show. This podcast is meant for an older generation, for those who remember The Sports Reporters when newspapers ruled the day and cable was in its nascence.

Who Is It Not For?: Mike Lupica is a very good writer, but he has made himself a lot of enemies, though I can’t imagine he’s as reviled as Mariotti, for example. That said, if you are anti-Lupica, you won’t want to listen to this show.

While I know who Albom and Lupica are, I’m not sure most people my age know their names. Millennials supposedly kill everything, so we must have killed The Sports Reporters, too. If this show was hosted by writers who move the needle with my age group – think Will Leitch, LZ Granderson, and even Bill Simmons, to name a few – it might be more “for” a younger generation.

This show is not for the “stick to sports” crowd. The TV show might have been the original sports program to link sports to social and political commentary, and it did it well. That doesn’t change on the podcast.

Can I Jump Right In?: Since episodes are released twice a week, there always a new one right around the corner. While The Sports Reporters usually focuses on current events in sports, it’s more about trends and headlines than game-by-game results. Neither of the episodes released as of this writing feel stale, though I imagine when the Dodgers and Indians stop streaking, the debut episode will seem outdated.

What’s Not Great?: I thought I would want a mediator on the podcast like Saunders, but I didn’t miss one. My biggest issues are the fact that panelists all seem like they’re from an older generation. I’d like to hear from at least one person who isn’t an AARP member. Growing up in a different era leads to different mindsets and opinions, and that diversity is lacking in the first few episodes of The Sports Reporters.

What is it with older hosts making me cringe with their ad reads? Lupica is still a writer full-time, but Albom has no excuse considering he hosts an afternoon drive radio show in Detroit. The Sports Reporters would be smart to take breaks for those reads, treating them as independent from the content of the show. Trying to shoehorn them within the dialogue felt painful. Treating the reads like how Tony Kornheiser does his reads would make me less likely to skip them. It’s as simple as “When we come back, our thoughts on Brian Kelly’s press conference behavior,” teamed with a music bump on each side of the read.

So, Should I Listen To This?: Overall, this show feels like The Sports Reporters. It’s insightful and engaging with no sense of selling out to 21st-century hot takes. By no means are these hosts sullying the lauded history of the TV show. With so many options nowadays, a simple opinion show doesn’t exactly cut through the noise. It’s a really good show, but there’s nothing unique about it.

In being revived as a podcast, the show is entering an even tougher space than modern sports television. There are plenty of great shows with smart hosts who share well-researched opinions in an entertaining fashion. The Sports Reporters doesn’t feel fresh or unique anymore. It’s not compelling enough for a subscription based on merit alone. If you like the hosts, then you’ll like the show. But if you don’t know Albom or Lupica for their work, their resumes won’t entice you to subscribe.

Bottom Line – TL;DR: The legacy of The Sports Reporters proudly continues with this podcast. It’s a shame that time has passed it by, making the show less compelling in 2017 than ever before.