What Is It?: Everyone’s favorite old fogies from Around the Horn episodes of yesteryear reunite, this time without a mute button.

Who’s The Host?: Woody Paige, formerly of The Denver Post, who is tired, but not retired, and Jay Mariotti, who needs a job after every newspaper in America has seemingly fired him in recent years, team up to host this podcast. The MGM Grand and USA Today Sports Weekly are supporters of the show, so it has a lot of sponsor power behind it.

What’s A Normal Episode Like?: It’s about half an hour (give or take) of sports talk, with both hosts talking from atop their high horses and complaining pretty often. The show feels very choppy because it is full of breaks for live reads, background music that bleeds into the actual discussions, and a lot of unsubstantiated filler talk.

Who Is It For?: This show screams older demographics. The biggest sponsors are a casino empire, which is looking for people with money and time to go to Las Vegas, and a weekly sports magazine that I can’t believe still exists.

But since it’s a podcast, Unmuted is also trying to appeal to younger listeners. Just look at all the hashtags in this episode description! 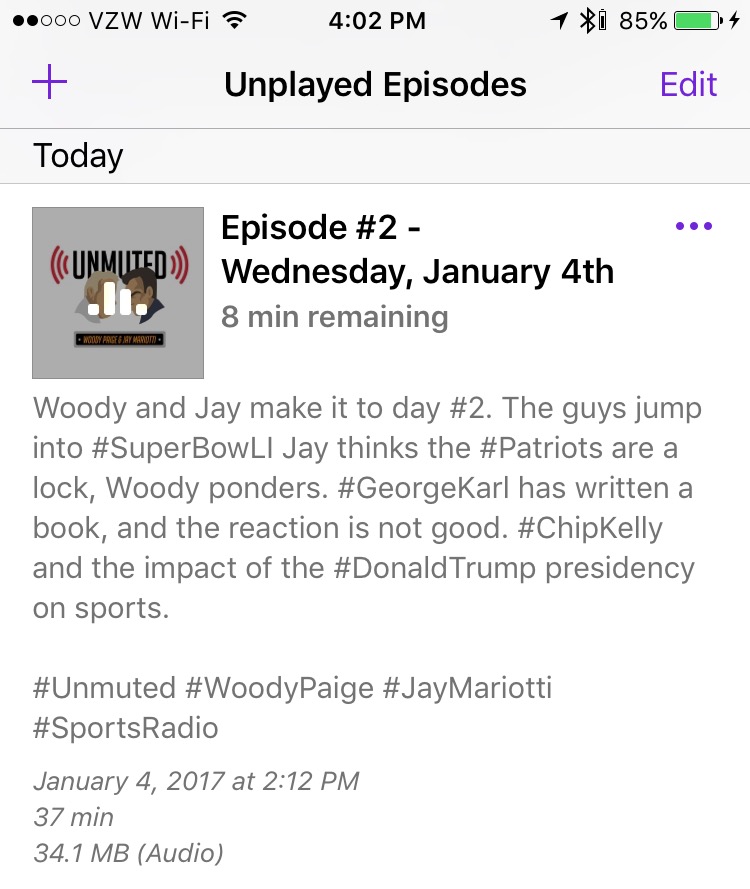 As one of those coveted social media millennials, I can promise you none of those hashtags make me more likely to tune in.

It is also a very “embrace debate” style show. If you wake up to First Take or Undisputed, this is perfect for your drive home.

Who Is It Not For?: This is not a smart podcast, with insights and focused, poignant discussion. It is not a show for anyone who wants to keep their brain cells.

Can I Jump Right In?: It’s a daily sports podcast, so yes, you can. But you shouldn’t jump into this radioactive spew without a hazmat suit.

What’s Not Great?: Where do I even start?

First of all, it’s a half-hour(ish) podcast that includes a minute-long intro, at least one live read, and tons of extra noise. Podcasts are a great medium for in-depth discussions, and this show is constantly upended by incessant noises and topic changes. For example, there are tons of unnecessary dings (similar to Pardon the Interruption), but they don’t mean anything. They’re just played, randomly. I laugh when that happens during Fox Sports Live‘s “Point to Points” segment, but I’m not laughing here. There’s also plenty of canned applause, which is fine to open the show, but it’s played multiple times during the show and serves no purpose but to distract me from the actual sports talk.

The other extra noise is music, being played at odd times, as well. To me, background music is the sports talk equivalent of waving a white flag. It means “what we’re saying isn’t going to be interesting enough on its own, so here’s some music for you to hum along to instead.” That’s why it plays during ad reads. Once in a while, for a bit, it can be nice. But using music as a crutch means the show is trying to hide a lot of issues.

I tried going into this podcast with an open mind, hoping Mariotti wouldn’t be as curmudgeonly as I remember. What’s clear is that he is bitter about not having the ESPN platform anymore, complaining that he couldn’t truly speak his mind on Around the Horn. Well, now that Mariotti has a podcast, it’s clear ESPN was right to give him a mute button. Almost nothing on his mind is forward-thinking, or interesting, or anything that I cannot hear or watch in a million other places. It’s like Mariotti has forgotten sports are a game, and that talking about them should be fun. He sounds like he has an underbite and constantly comes across as “holier than thou,” which he definitely is not.

At least Woody Paige has some fun on the show. I loved watching him and Mariotti duke it out on ATH growing up, and I always looked forward to reading whatever Paige posted on his chalkboard. He is the uncle I enjoy seeing at family gatherings, while Mariotti is the uncle who always tells me I should join the Marines. Both have antiquated viewpoints, but at least one is fun to talk to most of the time.

Paige, with a younger and more forward-thinking co-host, would be able to have a solid podcast. I don’t find similar redeeming qualities in Mariotti, who must think the sky is going to collapse from above him at any moment.

So, Should I Listen To This?: While I would like to say no and continue bashing the podcast, it does have a place in the modern sports talk landscape. It’s two writers from an older generation and it’s not completely unlistenable for that demographic. But that demographic is not the demographic that tends to listen to podcasts, so it’ll be interesting to see how long Unmuted lasts.

I also want to take some time to respond to Mariotti’s statement before he and Paige give their final thoughts. “There are no winners or losers in Unmuted,” he says. “We each deliver a show-ending commentary.” If this was Sports Reporters-level commentary, I would enjoy it for it’s quality and strong research. But when I hear Mariotti complain about how Los Angeles residents react to rain, I know this is nowhere close to that.

That said, I will admit there is one time Mariotti’s commentary surprised me. He spoke about UConn women’s basketball’s impressive winning streaks and called out fans for not watching such amazing dominance. While I have my qualms with parts of what he said, he sounded shockingly competent. But one interesting moment over two weeks of shows is woefully inefficient.

There are definitely winners and losers in Unmuted. Considering Mariotti and Paige are making money on this show, they’re clear winners. Having to listen to this show for the last couple weeks, I am a definite loser. I have reviewed so many good podcasts in this series, but Unmuted reminds me there are some bad shows out there.

Bottom Line – TL;DR: I can’t mute Mariotti and Paige, but I can – and will – unsubscribe.