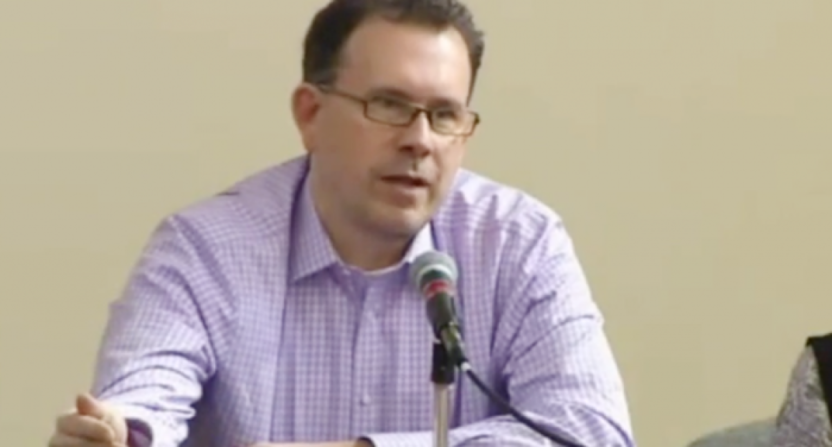 Monday saw the Jemele Hill/ESPN saga spread to separate company Spirited Media, because Dave Lozo (who freelanced for The Incline, one of Spirited’s three local news sites, and also freelances for Awful Announcing sister site The Comeback) criticized Spirited CEO Jim Brady (seen above) for an ESPN column Brady wrote on the Hill fallout in his role as the ESPN public editor.

On Friday, Lozo quote-tweeted one of Brady’s comments from Brady’s @ESPNPublicEd Twitter account and called him “the dumbest person alive.” On Monday, Lozo tweeted that The Incline let him go over that, which led to numerous tweets on the situation from Brady, Lozo and Spirited Media sports editor Dan Levy. All three spoke to Awful Announcing Monday afternoon to further explain their perspectives. First, Brady said the move to let Lozo go was his call.

“It was my decision,” Brady told Awful Announcing. “He has the freedom of speech, he can say whatever he wants. I have the freedom not to use him as a freelancer.”

Brady said he stands by that decision despite the criticism it’s taken on Twitter.

“If you read people on Twitter, it’s apparently ridiculous that you would fire somebody who you had used as a freelancer who calls you the dumbest human being on earth,” he said. “It’s like, that’s fine, you can say that, and I can decide I don’t want to use your work any more. I don’t know why that’s controversial. If you’re literally living in a world where anybody should be able to say anything they want to the person who, not employs them, but pays them out of a freelance budget, I don’t want to be in that world. We’re disrespectful enough as a society to begin with, and it’s getting worse because of social, I think, in a lot of ways.”

Brady said the issue wasn’t with Lozo criticizing his column, but with the language he used and the public way he did it.

“There’s multiple people on my staff who didn’t agree with the column,” Brady said. “This is not about you needing to agree with my viewpoint. I don’t agree with people on staff about lots of things. … I just think there’s a line crossed between disagreeing with a column and becoming very personal and nasty about it, and in a public forum on top of that. If you send me the same thing in an email, maybe we work it out, but if you decide you want to show off for your friends on social media, then that’s fine, but there’s a price to pay for that.

“And people act like it’s unreasonable to do that, and maybe I’m just old-school, but at the end of the day, I want people on my team, even if they’re freelancers, I want people working for us who are doing their best and really working hard and have some goal of making the company successful. And how could I possibly assume he would be one of those after that?”

Brady said the specific insult Lozo used put his comments over the top.

“Whether or not he agreed with the column or not, I could care less,” Brady said. “It doesn’t matter to me. Lots of people didn’t agree with the column and pushed back on it, and that’s just what we call debate in this country. I don’t care that he didn’t like the column. It’s when it got personal and when he started using the invective that he did.

Levy echoed those thoughts, that it wasn’t Lozo’s criticisms of the ESPN column, but the personal insult that resulted in the choice to let him go. 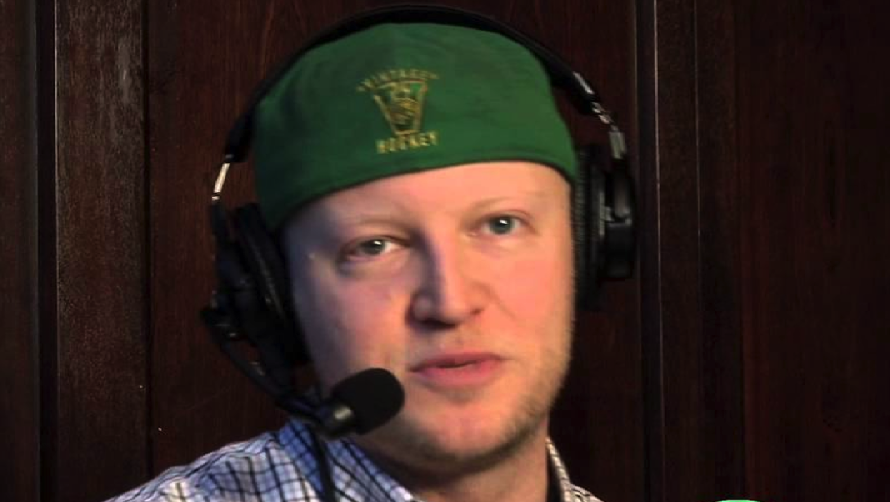 For his part, Lozo (seen directly above) told AA he didn’t know of Brady’s involvement with The Incline until after his critical tweets, but added that he still stands by them and would have sent them if he knew. He also said he understands why they let him go.

“I didn’t realize he was the CEO of a place I freelanced for until I got the email this afternoon saying they couldn’t use me this season, which is totally fair,” Lozo said. “You call the CEO the dumbest man alive, there could be consequences. No problem at all there. It had to end one way or the other at that point. But yeah, if I knew then what I know now, I’d still think/say the same things. I don’t think I said anything controversial or wrong.”

However, this wasn’t a decision about clear violations of a formal social media policy, as Spirited Media doesn’t have one. Brady said he doesn’t believe in spelling out social media policies and restricting staffers that way, but does expect them to exercise common sense.

“We haven’t had one, and we’ve never really needed one,” Brady said. “I’m always a little bit on the contrarian side on that. I think you just ask people to be smart, [not] write everything down and codify it. We really have a pretty simple social media policy which is ‘Don’t be dumb.’ And I think a lot of the same journalistic things apply; try to stay away if it’s something you cover, stay away from expressing opinions about the city government that you cover or issues that you cover.

“But outside of that, we want people to use it to help build audience and help relationships with readers. So we don’t want it to be too boring either. But we’re certainly not looking for hostility or invectives. That’s no way to win over consumers, and that’s what we’re trying to do. So no, we don’t have a formal policy.”

What if a Spirited Media employee or contractor had tweeted something like Hill’s “Donald Trump is a white supremacist who has largely surrounded himself w/ other white supremacists,” which started this whole saga? Brady made his concerns with Hill tweeting that known in his ESPN public editor column, and said it might lead to discussion and discipline if a Spirited Media employee did it.

“We probably would have had a chat about that for the same reasons I expressed in the column, which is that you can agree with that or not agree with that consensus, but generally the way we do things is report out facts that we can prove, and stack those up, and then if someone wants to make a conclusion on their own, then they can make it,” Brady said.

“Generally, going straight to the invective is not recommended reporting policy on our end. If you can assemble evidence, that’s the best kind of journalism. Put together the facts, and assume people can make the next leap, and let columnists and other people who have more freedom with language write those columns if they want. But when you’re talking about straight news pages on a news site, I think you’ve got to be careful, and I think you should always aim for showing and not telling. So I certainly would not have been too keen on that either if somebody had done it on staff.” 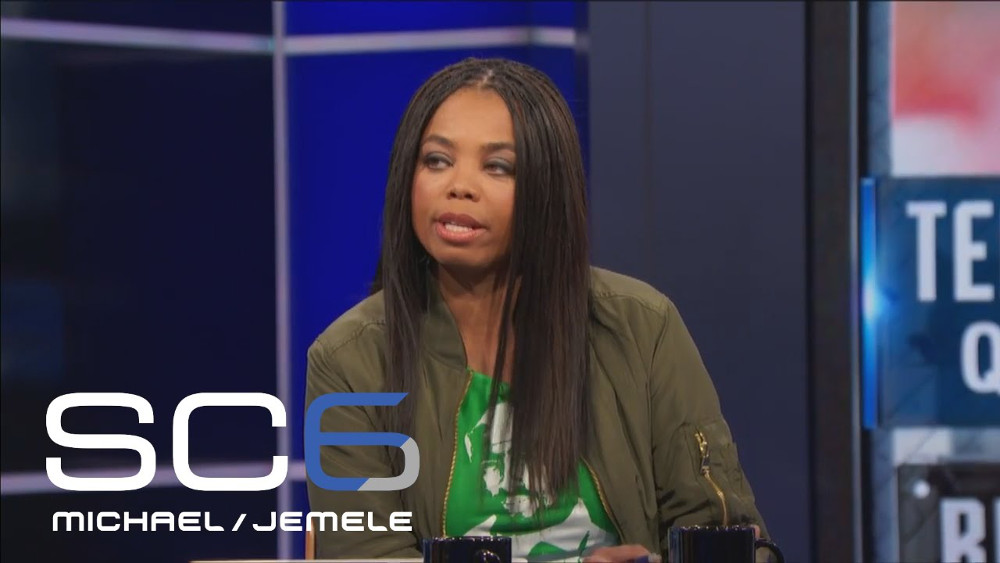 Hill (seen directly above) is not a straight news reporter, though. She’s been a columnist at ESPN and elsewhere, she’s currently a SC6 host (which involves a mixture of news and opinion), and she didn’t express those particular opinions on Trump on air or on ESPN’s site, but rather on her own Twitter feed. So AA asked Brady how he views his employees’ Twitter pages; are they straight news, commentary, or something else? He said he believes it should be a mix.

“They’re not straight news, I think we’re a little looser than that, but I don’t think it’s supposed to be straight-out opinion either,” Brady said. “I think we want people to have a little bit of a voice, and they can certainly weigh in on public events, especially if they’re outside their areas of coverage. We’re not looking for them to be straight and boring. We want them to reflect the energy of what they write. So we want people to write not just headline links, et cetera, but something that’s a little more engaging. And we want them to be responsive if people ask a question or want to get into a back and forth with you; answer, and be respectful.”

Brady said it’s important for his employees to not turn away potential readers.

“You know, we’ve not had too many problems on social media with people saying ‘You’re being hostile,’ or ‘You’re being rude,'” he said. “We’re trying to cultivate an audience. We’re starting with, being in cities like we are, we’re starting with a much, much smaller potential audience than national sites. As such, we’re really trying to cultivate everyone we can. And being hostile on social media to people in the city you’re trying to cover would not be high on my good strategy list. So we want them to be engaging, but not get straight into the big opinion. Some people do it more than others, and in most cases, it’s not people who are covering that particular subject. But national politics is always a tricky one these days.”

Brady went into great detail on the Lozo situation on his Twitter feed, responding to many critics, and said he did that because Lozo took it public.

Brady said he didn’t necessarily expect the level of criticism he received for his actions here, but he isn’t bothered by it.

“You never know how much backlash you’re going to get,” he said. “The key with backlash is to not read too much into it. Backlash on Twitter can often be brief, and it can often just be driven by a couple people, and they can go away quickly. So I don’t generally get too riled up about backlash on Twitter. I don’t think it’s going to be something that carries for very long.”