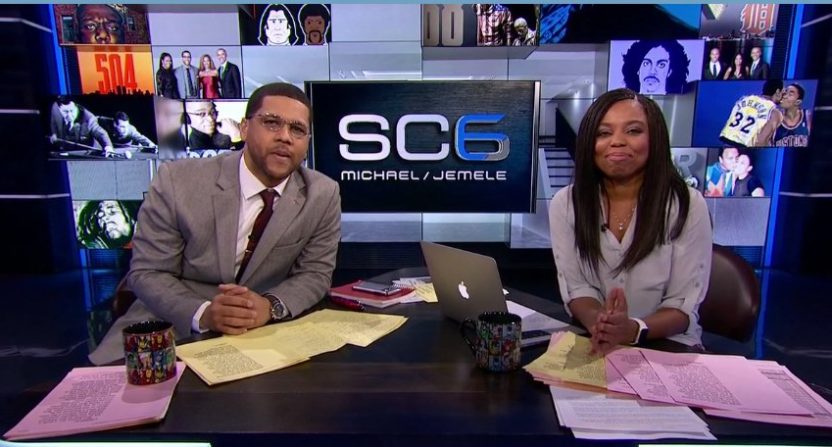 ESPN’s SportsCenter has been evolving into different versions over the past few years, from Scott Van Pelt’s midnight show to SportsCenter AM. The new 6 p.m. Eastern SC6 (or “The Six,” depending on who you’re asking) with Jemele Hill and Michael Smith might represent the furthest change from the standard mold yet, bringing a lot of the discussion and pop-culture angles that were stables of the duo’s prior His And Hers show and going a long way from a traditional SportsCenter. The program’s debut on Monday showed this format’s potential, but with it being such a departure from the norm, the big question is if enough new viewers will tune in and if enough old viewers will stick around.

It shouldn’t come as any particular surprise to plugged-in viewers that this show wound up being highly focused on conversations rather than news and highlights, as that’s been played up by everyone from ESPN SVP (SportsCenter and news) Rob King to Smith and Hill themselves. Hill told AA’s Shlomo Sprung in January “they also seem to really believe in what we created on His & Hers and kind of wanted us to do the exact same thing on SportsCenter, but do it in, obviously, a grander way given the resources that the brand has,” and that’s very accurate to what this first episode was.

There were plenty of similarities to His and Hers here, from the ongoing discussions (they recently spoke to Dan Patrick about why they see their show as discussion, not debate) to the pop culture references (everything from hummus to the Mr. Clean Super Bowl commercial was discussed here). Even the intro was one of their famed pop culture parodies, this time channeling The Golden Girls:

However, this wasn’t entirely Smith and Hill going back and forth, and those extra resources were definitely present as well. They were particularly noted with an interview with Patriots’ running back James White live from Disney World (with a parade in the background, no less) and an on-set interview with Celtics’ guard Isaiah Thomas (who they featured on a Game of Thrones-style “King of the Fourth” backdrop, speaking of pop culture references).

For those who aren’t already fans of Hill and Smith and/or His and Hers, the interviews may be the easiest entry point. They’re certainly the most traditional to SportsCenter, as there weren’t really many highlights here (which makes sense, considering that most of the game action by 6 p.m. ET is from the previous night) and there wasn’t a focus on the news (Smith and Hill did discuss some news stories, such as Tom Brady’s reportedly-stolen jersey, but in a lighter manner than you’d often find on SC. The interviews felt both familiar and different, though, and they showed off how Hill and Smith can perhaps excel in this format.

Extended interviews with athletes isn’t a new step for SportsCenter, especially Van Pelt’s midnight edition or some of the weekend ones with “Sunday Conversation” segments, but the way these co-hosts did it felt unique. With both White and Thomas, Smith and Hill seemed to find an excellent mix of serious questions and lighter ones, and they asked questions that connected with their subject and got them to open up in ways we haven’t always seen on TV. It was quite conversational, and that brought some extra insight, particularly when Hill asked Thomas “How do you feel when people look at the Celtics’ team and say ‘They need a star?'” and got a great, passionate response.

“It’s disrespectful,” Thomas said. “I feel like if I was 6’1”, there would be no question about the things I’m doing on the court. Just because I’m 5’9”, it’s like ‘He’s 5’9”, he can’t lead a team to the championship. He’s 5’9”, he’s a defensive liability. They’re always going to find something. If they’re still talking bad about LeBron and guys like Kobe Bryant, they’re definitely going to say something about me. I try to keep pushing, but one thing I care about the most, my teammates don’t say none of that. My teammates, my organization, my coach, Brad Stevens, those guys love me for who I am, and that’s who I really care about.”

You don’t often see that kind of fire in a SportsCenter interview, and Hill did well to bring it out here (and to do so in a conversational way rather than a confrontational one). There also was an excellent moment later on in the Thomas interview where they asked him about his connection with another famously-undersized player in Allen Iverson, and he spoke about what talking with Iverson and receiving his support has meant to him.

“It meant everything. It took me to another place mentally,” Thomas said. “I don’t really care what anyone else has to say, other than Allen Iverson.”

For all the serious moments, though, there was lots of humor here too. Particular highlights included both co-hosts making fun of Bill Belichick’s “We’re five weeks behind” comments after the Super Bowl, Hill saying President Trump’s Super Bowl party was “the kind of party you serve hummus at” and Smith saying “I’ve turned a lot of black fans onto hummus,” and Hill sharing her thoughts on the sexy Mr. Clean Super Bowl commercial.

“They had me looking at household products, this one in particular, in a whole new way,” she said. “Mr. Clean, look at him! They should put him in Magic Mike 3.”

Comments like that certainly aren’t typical for SportsCenter, but Smith and Hill seemed to find a good balance of serious discussion, lighter moments and conversational interviews. The SC6 balance won’t necessarily always be the way it was Monday, either; some may want more news, but the day after the Super Bowl’s pretty light for news, and King has made it clear that he has faith in Hill and Smith to break and discuss news when needed. However, it is clear that SC6 is likely to be much more about conversation and even comedy than your traditional SportsCenter.

Is that a bad thing? Not necessarily at all, especially not from a ratings standpoint. Traditional highlights shows are facing major audience challenges, which is why Fox made the drastic move of killing theirs altogether and turning it into a late-night show and ESPN has made the more gradual moves of defining separate SportsCenter editions around particular personalities and for particular audiences. Smith and Hill certainly had an audience on His and Hers, and if they can get many of their previous fans to follow them over while winning over some new ones, this could work out well.

However, given just how drastic of a change this is, it wouldn’t be surprising to see SC6 face some short-term struggles. Not all of those who tuned in for a more typical SportsCenter are going to stick with this. There seems to be some long-term potential here, though, and this may become much more destination viewing (especially for fans of Hill and Smith and their takes on sports) than your average 6 p.m. SportsCenter was. Some people are going to love this, and some people are going to hate it. If the former outnumber the latter (or if at least more tune in than were tuning in for the old SportsCenter), this could be a solid long-term move for ESPN.