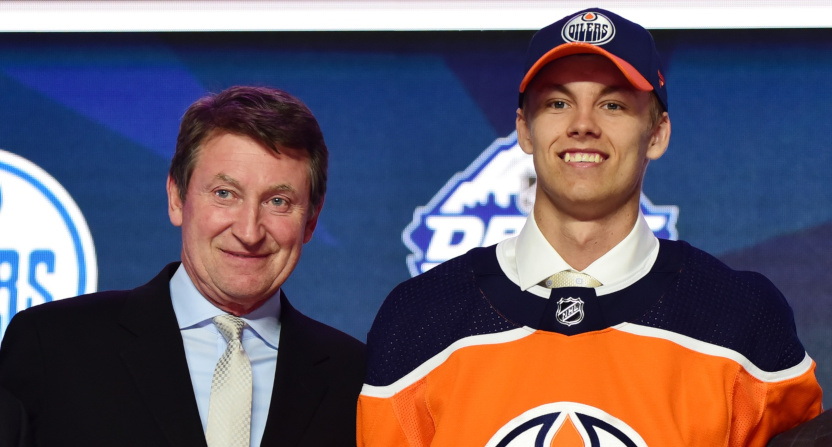 With two new networks in ESPN and TNT both getting national U.S. NHL rights for 2021-22 through 2027-28, both networks have been hiring numerous people for their new rights packages. Some of those hires have been of established NBC voices, but some have been from further afield, and there’s been a whole lot of talk about legendary NHL player Wayne Gretzky, who was courted by both networks but was apparently only considering TNT as of early May. Well, Gretzky has now landed there; he announced his exit from his vice-chairman role with the Edmonton Oilers on Twitter Tuesday, and Andrew Marchand of The New York Post (who previously had the scoop on Gretzky only looking at TNT) quickly reported that Gretzky (seen at left above with Oilers’ draft pick Philip Broberg at the 2019 NHL draft) will in fact be joining Turner as a lead studio analyst.

NEWS: TNT will pay Gretzky in the $3 million neighborhood, according to sources.https://t.co/tz7GcfCyAZ

It seems to makes some sense for Gretzky to join Turner rather than ESPN. As discussed in our previous post on this, Gretzky already has a friend there in Charles Barkley (who reportedly helped to pitch him on this role), and Turner also would seem to come with less commitments. TNT has the smaller of the split NHL packages, and they don’t have an equivalent to SportsCenter or Get Up or First Take or any of the other studio shows ESPN tries to work much of their talent into.

Turner has also shown with Inside The NBA in particular that their coverage can be a lot of fun and not a lot of arduous work for former athletes, to the point where there was even discussion this week about both Barkley and Shaquille O’Neal sleeping backstage during games while they weren’t on camera. So heading to the hockey version of that sounds like a good time. And Turner’s definitely made a pretty significant commitment to Gretzky with this reported $3 million pay range. And this should be easier still with Gretzky giving up his Oilers’ role; yes, he probably could have still held that (ESPN in particular has not shied away from employing team employees as analysts), but it would have led to a lot of conflict of interest questions. Now, he’s just a former player, and probably the most famous former player imaginable at this point.

Will Gretzky be any good as an analyst? That remains to be seen. He doesn’t have much TV experience (some of his most notable may be from ProStars introductions, a Young and the Restless role, time as a Dance Fever judge, and a one-time stint hosting Saturday Night Live), and he certainly hasn’t worked in an analyst role at a high level. And his attempt to go from out of the game to serving as the head coach of the then-Phoenix Coyotes didn’t work out great. But he has won more praise for his work with Hockey Canada, and he’s certainly very knowledgeable about the sport. If he’s able to communicate that knowledge to viewers, he could be a great addition to TNT’s coverage.