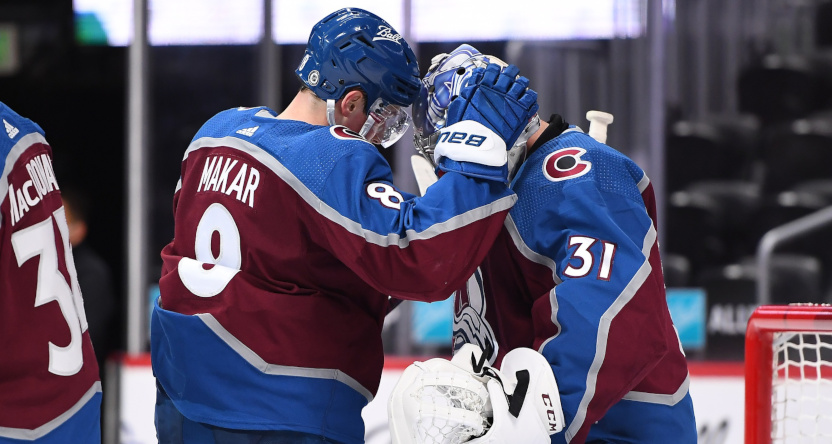 Much of the recent COVID-19 discussion with the NHL has centered around the Vancouver Canucks, who had 22 players and four members of the coaching staff test positive for COVID-19 at one point, and who saw their games Friday and Saturday called off Thursday (a day after forward J.T. Miller described the return-to-play plan as “dangerous for a lot of players“). But a lot of the league’s teams have battled COVID-19 issues at one point or another this season, and the Colorado Avalanche (who were previously shut down from Feb. 3-13 with three players on the COVID-19 protocol list) have now been shut down again, with their games Friday, Sunday and Tuesday postponed following a third person being placed on the list, with Bo Byram and Philipp Grubauer (seen above with Cale Makar after Monday’s win over the Arizona Coyotes) already there:

The @NHL announces @Avalanche games tonight vs. the @LAKings through April 20 are postponed. https://t.co/oAD6AAwDhD pic.twitter.com/60XsjZIfoT

Here’s more on that from Mike Chambers of The Denver Post:

The red-hot Avalanche is shutting down operations through Tuesday after a third member of the franchise tested positive for COVID-19.

Following the third positive test, Colorado canceled its morning skate Friday morning ahead of the night’s scheduled game against the Los Angeles Kings at Ball Arena. The NHL later announced the Avs will be on hiatus through Tuesday, postponing three games.

…Rookie defenseman Bo Byram and veteran goalie Philipp Grubauer are already on the NHL’s COVID protocol absence list and in isolation. The list will be updated Friday afternoon and if the latest positive test is a player, he will be added.

As Chambers’ piece notes, this shutdown comes at a rough time for the Avalanche, who were clicking well. They’re 9-1-0 in their last 10 games and first in the West Division. But three positive tests is a significant number; the Canucks’ initial shutdown also came after three positive tests, and then most of the team wound up testing positive over the next weeks.

These postponements could add to the length of the NHL’s overall schedule. The league was initially hoping to begin its playoffs May 11, but that’s been unlikely for a while; a late-March wave of reschedulings saw games pushed to May 11. The Canucks’ situation delayed things further, pushing their last game to May 16 before this latest outbreak (it’s now scheduled for  May 19), but even with that, there was some talk of starting the playoffs in other divisions before the Canucks and the North finished up. But now we’re seeing some West games that will need to be rescheduled (at least, under the league’s current plan to make sure all clubs play their planned 56 regular-season games), and this may not be the only outbreak still to come.

U.S. teams like the Avalanche do have the advantage of higher vaccine availability than is currently the case in Canada. Avalanche players and staff reportedly were vaccinated Monday, it’s unclear if that was with a first dose or a second dose, or with the one-shot Johnson and Johnson vaccine before that was put on pause. And other U.S. teams, particularly including the New York Rangers, have received some vaccines as well. So that could help prevent outbreaks on the scale we saw with the Canucks.

But vaccines need time to provide their fullest protection, and the NHL doesn’t seem to be out of the woods on outbreaks just yet. More than 150 players have been on the COVID-19 protocol list this season, with 14 there as of Thursday. And those numbers may keep rising.