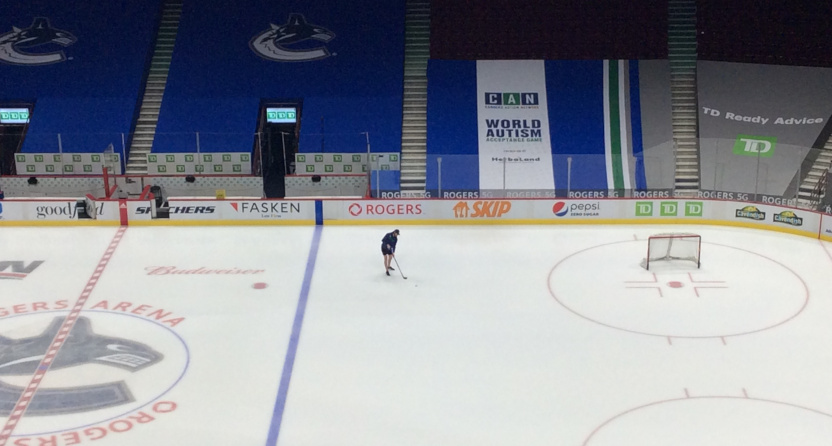 The NHL has had to make a whole lot of scheduling adjustments during this shortened 2021 season, including even moving back the scheduled start of the playoffs. The latest move there comes from a decision to call off Wednesday night’s scheduled Calgary Flames-Vancouver Canucks game just 90 minutes before it was set to start, which came following one further Canucks’ player and one coach being added to the league’s COVID-19 protocol list after its release at 5 p.m. Eastern Wednesday:

Tonight’s @NHLFlames at @Canucks game has been postponed. https://t.co/vepmbbLjWr pic.twitter.com/daMOp6TECj

This came with players, media and more already in the building, and that led to quite the unusual scene, with Canucks’ goalie Thatcher Demko (who just signed a four-year, $25 million extension with the team) skating around on an abandoned ice surface shortly after the news came down. Here’s a photo of that via Patrick Johnston of The Province:

Surreal scene: Thatcher Demko on the ice fooling around with a puck moments after news comes down that tonight's Canucks vs Flames game is off pic.twitter.com/pTQTpRiuUR

There was already some uncertainty about this game ahead of this, of course. This came after the Canucks had six days off, and those came with a COVID-19 scare, with forward Adam Gaudette pulled from practice Tuesday. However, at that point, he was determined to be the only one who had COVID-19, with teammates passing league and provincial contract-tracing protocols. So that led to some quotes from Vancouver coach Travis Green Wednesday that made it seem like the game was going to be on:

“It has been limited to one person,” Canucks coach Travis Green told reporters by video conference. “We’ve been following NHL protocol, and we’re getting ready to play a game tonight.

“When you get the news (about a positive test), you’re always wondering about it. Last night we had a pretty good idea that we were good to go this morning. We’ve had six days off prepping for a game here, so we’ve tried to just stay focused on that task, and let the people in charge that advise us on the protocols let us know if there’s anything else changing.”

It turns out they weren’t good to go. Gaudette was the only Vancouver player on that league list when it came out early Wednesday evening, but as per the NHL release, another Canucks’ player was added to the list following that. And a coach has been added to that list as well.