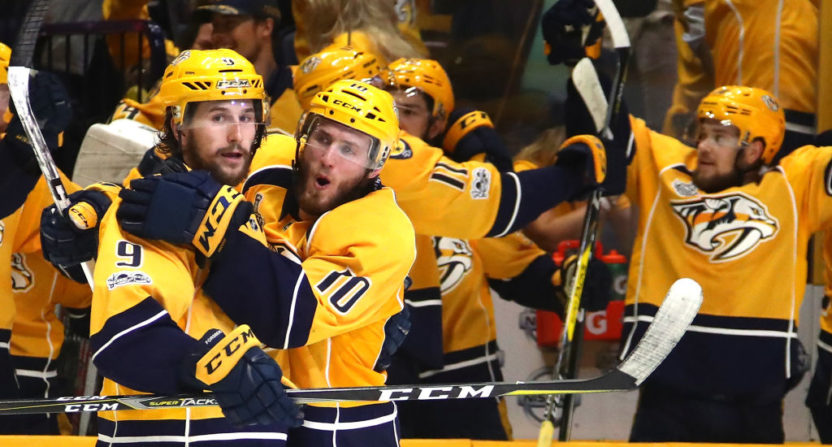 The NHL just might have a new marquee franchise on their hands – the Nashville Predators.

The Predators might not win the Stanley Cup this year, but they managed to crush the Pittsburgh Penguins in both Games 3 and 4 in Nashville, outscoring them by a combined 9-2 score. While the series is still just tied 2-2, the Predators seem to have all the momentum and everybody in the hockey world is talking about the amazing scenes in Nashville: Hockeytown, USA.

Even more impressive though might be the television ratings this series has drawn. Before the series, we discussed our belief that the Predators would do better on television than most people would expect from a non-traditional hockey market. Well, the Predators-Penguins series through its first 4 games have surpassed any and every expectation.

Monday night’s Game 4 averaged 5.7 million viewers and a 3.2 rating. To put that into perspective, according to Sports Media Watch it is the second highest Game 4 audience since 1995. Only Blackhawks-Bruins in 2013 at 6.5 million viewers recorded a higher Game 4 viewership number. Predators-Penguins is also up 28% from Penguins-Sharks last year and even up 44% from Lightning-Blackhawks in 2015 for their respective corresponding games.

Penguins-Predators through 4 games is averaging 4.2 million viewers, which is already a higher audience than last year’s Penguins-Sharks series that averaged 4.0 million. And there’s still mega audiences to come in at least Game 5 and Game 6 and maybe even in a Game 7 that will push ratings even higher and higher. Maybe the most remarkable thing about this series is that it’s doing so well without a really close game to drive numbers even further. As a series, the high-water mark of 2013’s Blackhawks-Bruins series, which averaged 5.8 million viewers, is a realistic target that’s in sight.

How to explain the success of this year’s Stanley Cup Final? A lot of it is owed to the magic that’s happening in Nashville. After all, that’s really the only variable compared to last year’s Final which featured the Pens and the Sharks. Frankly, the city’s embrace of the Stanley Cup and Predators is infectious. You can’t help but get caught up in the rabid fans, the catfish, the country music stars cheering in the stands, P.K. Subban, Pekka Rinne’s diving saves, and the party that Nashville experienced this week. Even Charles Barkley had to check it out for himself in person and attended Game 4, saying how much more exciting the Stanley Cup was than the NBA Playoffs.

How did it happen? A lot of it has to be owed to the Predators fans, who are issuing a challenge to every other fanbase around the league to step up and provide the same level of support for their team. And when the Predators score more, and the fans get into it more, it’s even harder to turn the channel because you get swept up in the excitement, even if the game’s outcome has been decided.

The Predators don’t have a ton of stars and household names outside Subban and Rinne and maybe Mike Fisher (who just so happens to be married to Carrie Underwood) but they play an exciting and fearless brand of hockey that seems to feed off their crowd. And with everything else that’s been going on in this Final, it’s easy to forget that this is a Cinderella story too with the Preds being the #8 seed out west. It seems like ages ago that they swept aside the Blackhawks with ease in the first round.

This is the absolute best case scenario for the NHL. The number one way to grow the league is to cultivate more marquee stars in more markets around the country. It’s something new and it’s something special. Nashville drew a 28.0 rating for Game 4 and even Knoxville registered a 10.2 rating. And that was with tens of thousands of fans outside the arena. Those are numbers that the NHL could have only dreamed of when Music City was awarded with an expansion franchise 20 years ago. Imagine if Minnesota or Columbus could do the same thing in the next few years. Or maybe even eventually Las Vegas. It’s a dream come true for the NHL that they don’t have to just depend on the Blackhawks to drive positive ratings.

Expect to see a lot more Nashville Predators games on NBC and NBCSN next year, whether the Preds actually go on to win this series or not.