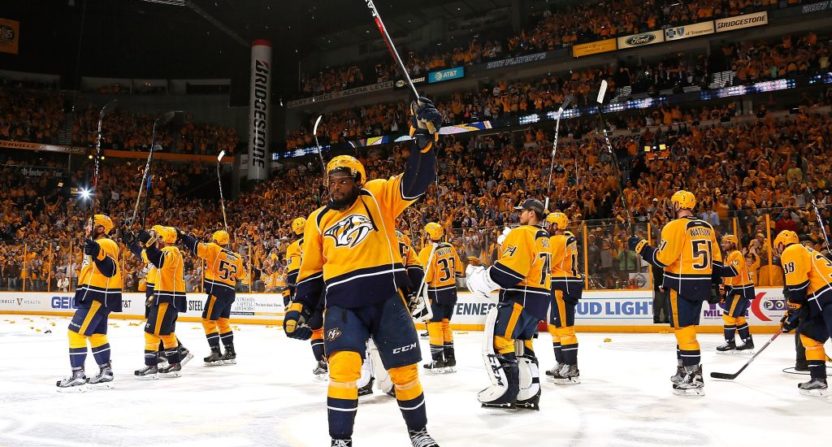 Thursday night will see the Pittsburgh Penguins and Ottawa Senators square off in Game 7 of the Eastern Conference Finals with the winners set to face the Nashville Predators for the Stanley Cup.

The conventional wisdom would dictate that the executives at NBC would be rooting fairly hard for the Penguins as one of the marquee franchises in the league to help drive some starpower for the Stanley Cup Final. The Penguins, with Crosby and Malkin, are a much bigger draw than a Canadian team with little tradition to draw on.

Ottawa and Nashville aren’t big markets. They aren’t traditional powerhouses. And what’s more they were 12th and 16th in the regular season standings. That doesn’t exactly scream “must see TV” for the non-hockey fan, does it?

And yet, these Stanley Cup Playoffs thus far have seemed to buck tradition and conventional wisdom, both on the ice and in the television ratings. In fact, this year’s playoffs are higher in ratings versus last year even though there are some things that one would think would work against it. First, the Blackhawks were swept aside by the 8th seeded Preds in the first round and thereby their massive audience didn’t carry through the postseason. Second, last year was infamous for zero Canadian teams making the postseason (the theory goes that more hockey fans in America will watch American teams versus Canadian teams and vice versa). And yet, even with a proliferation of Canadian teams in the playoffs like the Senators and Oilers, ratings have held pretty steady.

So if the Senators do win tonight, what could Stanley Cup ratings look like? Here’s the past five years of average viewership for the Stanley Cup Final:

If you go all the way back into the previous decade, the best analogy to a potential Preds-Sens Final might be 2007’s matchup between the Ducks and the Sens, which averaged 1.8 million viewers or 2006’s Hurricanes-Oilers which averaged the same in spite of going seven games.

While that might be alarming to NBC and hockey enthusiasts that want to see their sport succeed, the NHL is in a much better place right now. Back in the mid-2000’s the league was just coming off a crippling work stoppage that cancelled an entire season. And the Stanley Cup Final started on Outdoor Life Network and Versus. It was a dark time for the NHL but the league has climbed slowly and steadily out of the lockout-induced bottomless pit. Since 2008, no series has averaged less than 3 million viewers.

Yes, the NHL has been pretty lucky to have some of its most prominent teams and biggest markets continually make the Stanley Cup Final over the past ten years. The past nine Stanley Cup winners have been the Blackhawks (3), Penguins (2), Kings (2), Bruins, and Red Wings. The Blackhawks have certainly moved the needle the most as their series have the three highest averages over that timespan including 2013’s record audience.

Could Preds-Sens deliver viewers? It’d be foolish to think that anyone would think they would deliver Blackhawks level numbers, but it’d be also quick to jump to the conclusion that the NHL will revisit the numbers of the mid-2000s. Fans have caught on to the stories from Ottawa and Nashville with ratings up so far this postseason, especially the underdog Predators. It’s impossible as a neutral fan not to get caught up in the energy of Nashville and they have a recognizable superstar in P.K. Subban that can help bring in casual fans as well. Of course the Penguins would deliver more viewers than the Senators, but the dropoff shouldn’t be as drastic as one might believe at first glance.

And in the end, maybe this would be the best case scenario for the NHL and NBC in the big picture. They can’t be dependent upon the Blackhawks and Penguins for ratings forever. So the more the NHL and NBC can help build new stars and new marquee franchises in new markets, the better off everyone will be in the long run.