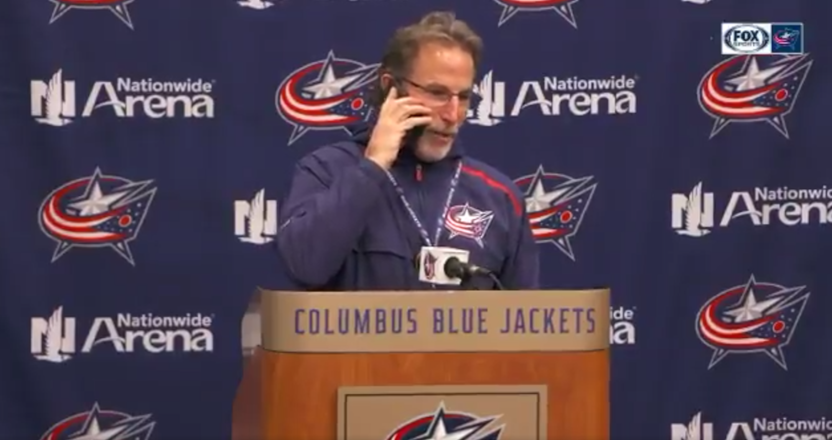 It’s widely known that Columbus Blue Jackets head coach John Tortorella has a unique relationship with the media. At times Torts is like the NHL’s Gregg Popovich or Gregg Popovich, except maybe even a little more feisty. Other times, he can show a more humorous side.

Thankfully for the media covering the Blue Jackets, they got Happy Torts on Monday.

With Columbus going all-in at the trade deadline, making several deals in advance of a playoff push, it’s natural that people covering the team would want to get all the insights possible about the Blue Jackets’ wheeling and dealing. Columbus made four different deals at the deadline to bring in players and even held onto free agent-to-be Artemi Panarin,  even though the star has made no commitment to re-sign with the team.

During his Monday press conference, Tortorella saw the phone of Athletic reporter Tom Reed ringing on the podium. Instead of simply letting it go to voicemail, Tortorella decided to pick up and have a brief but pleasant chat with the caller, which wound up being Reed’s mother. Of course, that still had to include at least one needle at the reporter.

"Mrs. Reed? Hi, this is John Tortorella, I'm in the middle of a press conference here."

When a reporter's mom calls during the @BlueJacketsNHL head coach's press conference, Torts goes ahead & picks up the phone ? pic.twitter.com/IG7HGe20Zb

It’s good to see Tortorella has mellowed just a little bit during his time in Columbus. Once upon a time he didn’t respond so well to cell phones ringing during his press conferences, like when he was coaching the Rangers back in 2013.

Reed’s reaction on Twitter summed up the whole situation nicely.

If it’s not one thing, it’s your mother.

Who knew the Geico commercial about moms calling at the worst time could come to life in such a way? This continues a fascinating trend of coaches answering phone calls during press conferences. Just remember, reporters, put your phones in airplane mode if you don’t want to risk coaches talking to your mom.