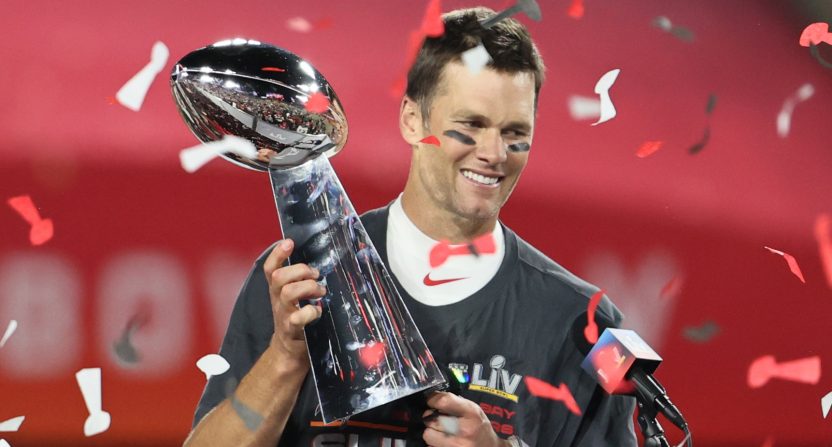 The ballyhooed battle of quarterbacks Tom Brady and Patrick Mahomes in Super Bowl LV didn’t deliver on the field, and didn’t deliver in terms of viewership, either.

According to CBS, the game drew 96.4 million viewers over broadcast, digital, mobile, and ESPN Deportes. Last year’s game on Fox drew 102 million across all of those properties (with the Spanish language version airing on Fox Deportes rather than ESPN Deportes). This marks an overall decline of roughly 5%.

On CBS alone, the game reportedly drew 91.63 million viewers. Last year’s game drew 99.9 million on Fox, marking a decline of 8% for this year.

Of note: the NFL’s regular season package of games was collectively down 7% for the season, meaning these declines are right in line with what we’d expect.

It also continues a remarkable decline across championship events over the last year in all sports, with the NBA Finals, NHL Stanley Cup Final, World Series, and College Football Playoff all hitting historic (or close to historic) lows since the fall. Super Bowl LV’s decline isn’t as steep, but the broadcast-only number still hit a 15 year low (Super Bowl XL, Steelers-Seahawks, drew 90.75 million viewers on ABC in 2006).

This is also the fifth decline in six years for the Super Bowl since the Patriots-Seahawks classic in 2016 topped out with over 114 million viewers in 2015. Last year’s game on Fox increased from 2019’s Patriots-Rams tilt, but this year’s decline more than made up for that increase.

It’s important to note that despite the overall disappointment for the game’s viewership, this is still going to rank somewhere in the top 20 most-watched American TV broadcasts of all-time on one network, along with 18 other Super Bowls and the series finale of MASH. It’ll also be the most watched sporting event of the year, and the most watched television program of the year.

For whatever it’s worth, I think this game emphasizes the need for a tight, entertaining Super Bowl. In the first half, Kansas City went down eight in the second quarter for about a minute before Tampa Bay scored again to make it a 15 point halftime deficit. The Chiefs cut it to 12 for three minutes before the Bucs scored again, and the deposed champs weren’t able to get on the board again. Last year’s game was tied at halftime and the 49ers didn’t go up two scores until the end of the third quarter. There was still plenty of drama (and sure enough, there was plenty of excitement in the fourth quarter), so there was no reason to stop watching. This year? Not so much.

Next year, Super Bowl LVI is scheduled to air on February 6th on NBC, and will take place from the new SoFi Stadium in Inglewood (though everyone will just say Los Angeles). It’ll be NBC’s first Super Bowl since 2018 thanks to a swap with CBS, giving them this year’s game in exchange for next year’s game, leading into the Winter Olympics on NBC. This also could be the final Super Bowl broadcast for Al Michaels – he’ll be 77 for the Inglewood-hosted game, and with new TV contracts kicking in after the 2022 NFL season, it remains to be seen when NBC’s next Super Bowl broadcast will take place.