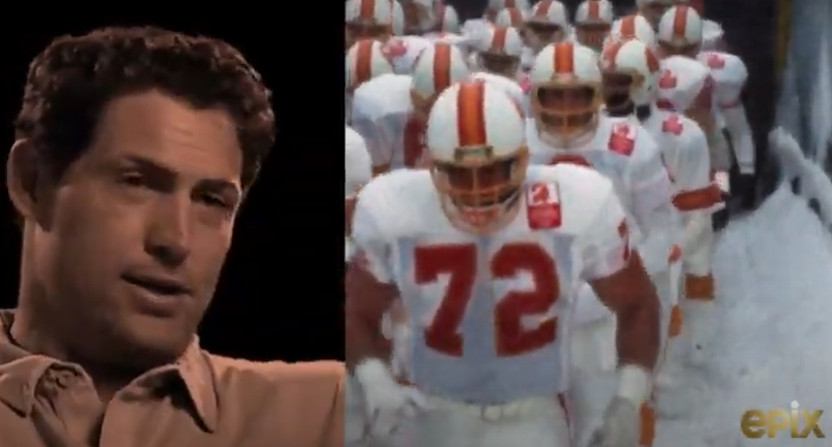 EPIX’s NFL Icons series with NFL Films is featuring a lot of NFL players and coaches turned media figures in its ongoing second season, and it’s getting some notable quotes from them. For example, last week’s episode on coach turned NFL on Fox analyst Jimmie Johnson had interesting comments on a pre-game address he gave to the Kansas City Chiefs ahead of their Super Bowl LV victory. This week’s upcoming episode, premiering Saturday night at 10 p.m. ET on EPIX, features NFL on ESPN analyst Steve Young, and it has some great comments from him on his second NFL start ever, which came in a historic blizzard in Green Bay on December 1, 1985. That game, dubbed the “Snow Bowl,” saw Young’s Tampa Bay Buccaneers lose 21-0 to the hometown Packers. And Young still has some not-so-found memories of it:

Some highlights from Young there:

“My second start of my NFL career, I played in a blizzard, worst blizzard in Green Bay history.”

“We’re in white uniforms. I can’t see – the snow’s coming in my face. I can’t see anything. I can’t see anybody. And about third quarter, I still hadn’t completed a pass. I mean, I might be the first quarterback in the history of the game not to complete a pass. And I’m like 0-for-15. So I get James Wilder, the running back. I said, ‘Look, I’m gonna drop back. You- cut in front of me, I’m gonna shovel you the ball.’ I was one-for-22.”

“Snow is piled high in the field, and I get my- he shoves my face down in the snow, and it gets packed in there. I can’t breathe.”

…“That was the low point. See, that’s the funny thing about my career. Guys can have bad dreams. I lived them.”

That clip also has his mother, Sherri Young, talk about how it was tough for her to watch:

“The highlight film had Steve, his face, just shoved in the snow and his mask full of snow, and I just cried. It was just a really hard thing to witness. It must have been so awful for him that day.”

That game saw 12 inches of snow fall pre-game and another three to four fall during the game. The Buccaneers only gained 65 total yards and five first downs, while the Packers gained 512 total yards on 31 first downs (albeit with four turnovers). But Young’s underselling his passing stats a bit; he actually finished with eight completions on 17 attempts for 53 yards, no touchdowns, and one interception. And he was sacked five times, four of them by Alphonso Carreker. Meanwhile, Green Bay quarterback Lynn Dickey finished with 22 completions on 36 attempts for 299 yards, albeit with no touchdowns and two interceptions.

The “Snow Bowl” got plenty of attention at the time, much of it for the weather. And the New York Times headlined the UPI game story they picked up with  “Packers 21, Bucs 0, Snow 16.” So it was a pretty miserable second NFL game ever for Young, who had just come over from the USFL. And while fortunately it didn’t wind up being a defining career moment for him, it’s certainly one he remembers vividly. So it’s interesting to see him speak about that in this series.