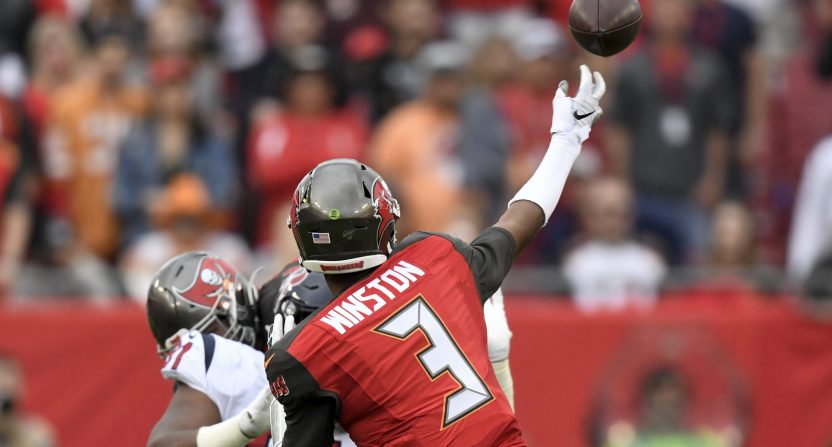 Jameis Winston is the Tampa Bay Buccaneers quarterback who is either going to throw an interception or make an amazing play every time he touches the ball.

Deshaun Watson is the Houston Texans quarterback who has led the team to a 9-5 record and put them in prime position for the playoffs.

Winston and Watson met on the field this Saturday when the two teams played one another. While they were both involved in this game and both playing quarterback, it’s important to remember that they are, in fact, two different people.

That was a tough thing for NFL Network’s Rich Eisen to keep track of during the first half.

Here's a compilation of all the times @richeisen mixed up Watson with Winston in the 1st half of the #Buccaneers–#Texans game. Sorry Rich ????

It got to the point where Eisen finally (kinda) figured it out late in the second quarter. As he offered up a mea culpa, he also suggested that so long as he’s messing up the quarterback names, viewers might as well find a way to enjoy it.

“There’s too many Watsons and Winstons. If people are having a drinking game with how many times I’ve mixed it up, well, it’s 5 o’clock somewhere.”

My wife Suzy came up with the idea, texting me during a commercial break. #BetterHalf https://t.co/NkAorl0nVp

To give Eisen a break, it also doesn’t help that Justin Watson is one of Tampa’s wide receivers, which means there’s a decent chance he’s thinking about “Winston to Watson” while remembering to say Winston after a catch by Watson, all while the other Watson watches Winston from the sidelines.

If you’re doing the Winston/Watson Drinking Game in the second half, please make sure you’ve got a designated driver. It could get crazy.