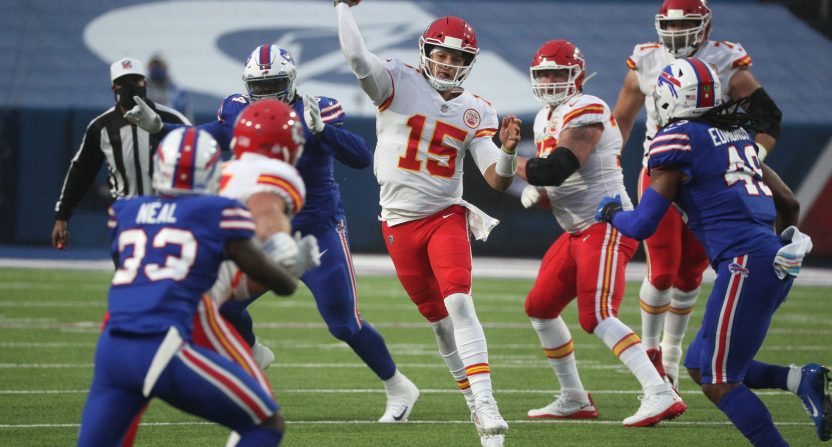 The newly released 2021 NFL schedule features 51 evening games and five nationally televised games in exclusive timeslots, with five more primetime affairs scheduled to be added on the final Sunday of the season and two late-season Saturdays. There’s also a chance that as many as 10 Sunday night games will be flexed between Week 5 and Week 17.

But working only with what we know right now, we’ve gone ahead and ranked the 56 games you’re currently slated to have access to this year regardless of your cable package.

56. Panthers at Texans (Sept. 23, NFLN) — Oh yeah, Sam Darnold vs. Tyrod Taylor? It’s a distinct possibility. Even if Deshaun Watson is playing at this point, neither team looks like a contender.

55. Giants at Washington (Sept. 16, NFLN) — It’s a critical season for the new-look Giants and Washington’s defense is a show, but the Week 2 Thursday nighter doesn’t stand out much.

54. Giants at Chiefs (Nov. 1, ESPN) — Two popular teams with strong fanbases and I do have some hope for the Giants this year, but the blowout potential is pretty high at Arrowhead.

53. Jets at Falcons (Oct. 10, NFLN) — The first London game in almost two years will also likely be Zach Wilson’s debut on national television. The Falcons offense is also worth tuning in early for, but this isn’t exactly a marquee matchup.

52. Jets at Colts (Nov. 4, FOX) — This matchup has very similar elements to Jets-Falcons but is at least an intra-conference game.

50. Lions at Packers (Sept. 20, ESPN) — This will be our first national look at Jared Goff and the revamped Lions offense, but is that enough for you? Throw in the uncertainty about Aaron Rodgers’ future and this isn’t sexy right now.

49. Broncos at Browns (Oct. 21, FOX) — The Browns are a worthy attraction nowadays but the Broncos have a lot to prove and their quarterback situation still blows. This isn’t appointment viewing.

47. Giants at Buccaneers (Nov. 22, ESPN) — See Buccaneers at Eagles, except Tom Brady and the Giants have a more interesting history.

46. Steelers at Vikings (Dec. 9, FOX) — I worry about both of these teams this late and there’s not a lot of juice in the matchup.

45. Cowboys at Vikings (Oct. 31, NBC) — A healthy Dak Prescott should make the Cowboys more interesting and the Vikings aren’t bad but neither team looks like a contender. A “meh” Halloween Sunday nighter.

43. Colts at 49ers (Oct. 24, NBC) — We’ll see if Wentz can get it back together in Indy, and we’ll see if the 49ers can bounce back from a disastrous, injury-filled season. If those things happen, this is a fun matchup. But those are big “if”s and it’s not exactly a rivalry.

42. Colts at Cardinals (Dec. 25, NFLN) — This is similar to Colts-49ers except damn late in the year and on Christmas night.

41. Titans at Rams (Nov. 7, NBC) — There are a few somewhat odd Sunday nighters this year. Both of these teams have Super Bowl aspirations but it’s a cross-conference non-rivalry in the second half of the season.

39. Bears at Lions (Nov. 25, FOX) — Standard early Thanksgiving game. Not a lot of intrigue unless Justin Fields is under center for Chicago.

38. Bears at Steelers (Nov. 8, ESPN) — Who knows what either team will look like by Week 9, but if they’re playing well and this is Fields vs. Ben Roethlisberger, it could be a lot of fun. It’s just as likely to be a bummer with both teams fading from contention and no rivalry to speak of.

37. Browns at Packers (Dec. 25, FOX) — It’ll likely be a meaningful Christmas Day game for both teams, but we’re awaiting the Rodgers situation.

34. Vikings at Bears (Dec. 20, ESPN) — I could see this having tremendous importance in the playoff race, and maybe we have Justin Fields at this point.

33. Packers at 49ers (Sept. 26, NBC) — Same question about Rodgers, and it’s unlikely this will give us our first look at Lance. Still, both teams should be considered contenders in the NFC.

32. Packers at Cardinals (Oct. 28, FOX) — Again, who knows about Rodgers. But this will actually be our first national look at Kyler Murray and the exciting Cardinals and both teams should contend in the NFC. Solid Thursday nighter.

30. Dolphins at Saints (Dec. 27, ESPN) — I think the league is taking a risk putting the post-Drew Brees Saints in a bunch of December primetime games, but who knows with Sean Payton and Co. and the Dolphins should be in contention here.

29. Patriots at Falcons (Nov. 18, FOX) — This Thursday nighter stands out to a lot of people because of their Super Bowl history together, but once that pregame storyline is gone, it’s not a particularly strong matchup. We’ll see if Atlanta can become a contender again in 2021.

28. Raiders at Chargers (Oct. 4, ESPN) — This could determine which AFC West afterthought might have a chance to push the Chiefs atop that division. Plus, Justin Herbert is just fun and he’s got a lot more protection this year.

27. Steelers at Chargers (Nov. 21, ESPN) — At the very least, both should still be wild-card contenders on the brink of the home stretch. And both are indeed fun to watch.

26. Seahawks at Washington (Nov. 29, ESPN) — Seattle is a must-watch in primetime and Washington can bring it.

25. Cowboys at Saints (Dec. 2, FOX) — The TNF schedule is pretty solid this season and this is no exception. Both popular teams should be desperate for Ws at this stage.

24. Saints at Buccaneers (Dec. 19, NBC) — Will this matter in Week 15? If it does, it could be epic. But there’s a decent chance it won’t because Tampa looks primed to run away with the NFC South.

23. Bills at Saints (Nov. 25, NBC) — We’ll see how the post-Brees Saints look by Thanksgiving, but the entertaining Bills bring new energy to that night game and New Orleans should at least put up a fight at home.

22. Dolphins at Jaguars (Oct. 17, CBS) — The second London game on the 2021 schedule gives us a fun young quarterback matchup between Tua Tagovailoa and Trevor Lawrence. The Dolphins could be a contender and the Jags should at least be much improved.

20. Saints at Seahawks (Oct. 25, ESPN) — It’s important to remember this is no longer Brees vs. Russell Wilson, but you still can’t count New Orleans out and Seattle is always entertaining in primetime.

19. Rams at 49ers (Nov. 15, ESPN) — A strong division rivalry between teams with popular coaches, interesting quarterbacks, and geographically close fanbases. If both can hold up for 10 weeks, this could be superb.

18. Rams at Cardinals (Dec. 13, ESPN) — Basically the same idea as Rams-49ers except for a month later, and Arizona is a little more intriguing.

17. Jaguars at Bengals (Sept. 30, NFLN) — Neither team is a contender but this will be our first national look at Lawrence in a battle between the last two No. 1 overall pick at quarterback. That’s pretty sick.

16. Ravens at Raiders (Sept. 13, ESPN/ABC) — The Lamar Jackson-led Ravens are just a lot of fun and the Raiders should put up a fight in their home opener.

14. Ravens at Dolphins (Nov. 11, FOX) — Same rules apply here regarding Jackson, except Miami could be better than Las Vegas or Indy and there’s the Tua factor.

13. Bills at Titans (Oct. 18, ESPN) — Two blossoming AFC contenders and a primetime look at stars Josh Allen and Derrick Henry. A lot to like about the Week 6 Monday nighter.

12. Seahawks at Steelers (Oct. 17, NBC) — Wilson vs. Roethlisberger is fireworks waiting to happen and both teams have Super Bowl aspirations.

11. Chiefs at Raiders (Nov. 14, NBC) — Las Vegas played Kansas City tough last year so this could be quite compelling with the Chiefs on the road.

10. Chiefs at Chargers (Dec. 16, FOX) — The same idea as Chiefs-Raiders except for a month later and Los Angeles is a slightly better and more entertaining team.

9. Rams at Seahawks (Oct. 7, FOX) — This has become a great rivalry and Stafford makes the Rams a little more intriguing.

8. 49ers at Seahawks (Dec. 5, NBC) — Pretty much the same deal as Rams-Seahawks except a month later and possibly with Lance involved.

7. Cowboys at Buccaneers (Sept. 9, NBC) — Prescott’s return to a high-powered offense in a popular market against Brady and the fully-reloaded defending champs is a pretty sweet formula for the season opener.

6. Patriots at Bills (Dec. 6, ESPN) — Most don’t remember the last time the Bills and Pats were this good at the same time. This could be a massive December Monday nighter.

5. Browns at Ravens (Nov. 28, NBC) — Both teams have become so damn fun to watch and this could be a crucial rivalry game at the start of the home stretch.

4. Browns at Steelers (Jan. 3, ESPN) — Cleveland-Baltimore is a better matchup at this point but this one lands at the end of Week 17.

3. Buccaneers at Patriots (Nov. 3, NBC) — It’s actually better this is happening for the first time this year rather than last year because the Pats are improved after an off-year and will really have a chance to put up a fight against Brady at home.

1. Chiefs at Ravens (Sept. 19, NBC) — Another Mahomes-Jackson battle and a potential early-season AFC title game preview. This could be pure drama if Jackson can’t get over his big-game struggles at home against Goliath.