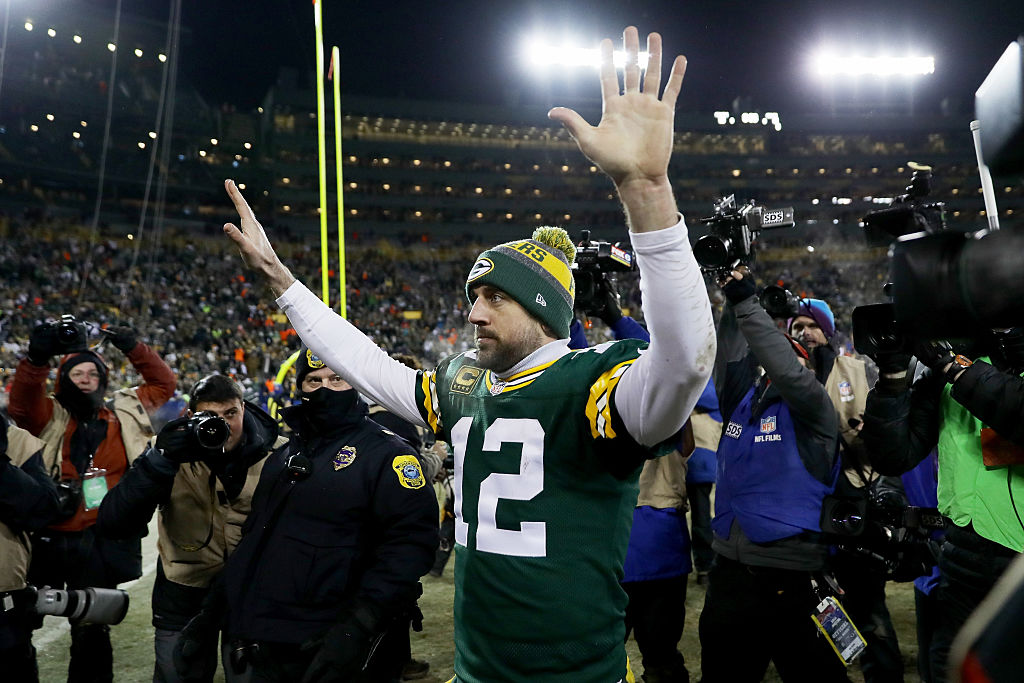 Viewership of this past weekend’s Wild Card playoff games should have been a boost for the NFL as it continues to work through a relatively challenging regular season. Yet if the reported overnights are any indication, the league will be expecting some postseason declines as well unless either the Dallas Cowboys or the resurgent Green Bay Packers run the table after their divisional round game this coming weekend.

This should be somewhat expected, however, because we’ve come out of a 2016 campaign that was as relatively as hard as it’s been for the league in a very long time. Previous analysis showed that the ratings struggle was more than a passing concern, but a real problem for both the league and its broadcasters. FOX, CBS and ESPN didn’t shout to the heavens about their numbers as loudly this season and try as it might, NBC’s sole reason for sounding its horn this season was because of Dallas. After taking a glance at how Election Day had an overstated effect on viewership, here are snapshots at how the full NFL season looked from a demographic standpoint against the past three seasons, including the TV peak of 2013.

Once again, this looks at three key age breaks, the highly coveted and hard-to-hold demo of ages 18-34 and the two big money breaks for linear television, 18-49 and 25-54. As the midseason and this week’s post-Election Day analysis, this glimpse into the demographic viewership excludes the lower-rated NFL Network due to its smaller household footprint and the simulcasts from CBS and NBC in recent years.

And yes, we know many fans have moved to watching online. While that’s true, the television money hasn’t fully followed… yet. 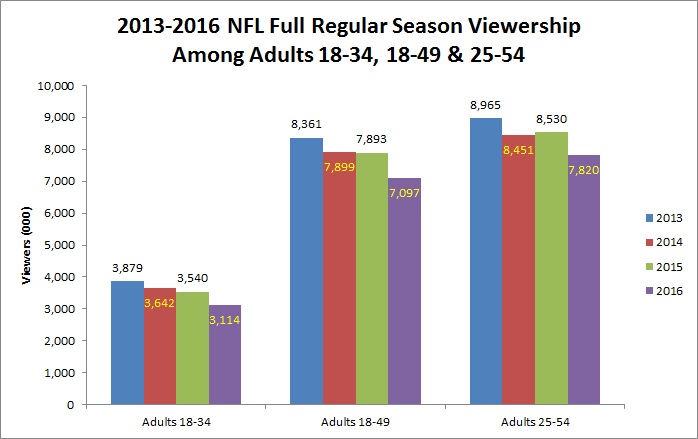 As seen above, viewership of the average game with the four major broadcasters dropped by 12%, 10% and 8% in the respective demo breaks versus 2015. Just as interesting is the fact that although the second half of every season brings more eyeballs to the league due to increased TV usage, the drops among the network group not only wiped out the gains seen from 2015, but they are double the declines from 2014 vs. 2013 when the ratings erosion began to take hold. In that period after the infamously bad 2014 offseason, the NFL lost about 6% of its viewership with the same three key demos (a 3% decline overall that was staved off thanks to a 2% bump from adults over 55).

Once more, examining viewership among ethnic and gender demos, there are fascinating observations to be made. After all, many speculated that a major reason for the ratings declines stemmed from the Colin Kaepernick-inspired national anthem protests, which melded just oh-so-well with a league that is disproportionally black, but with multiple white stars. 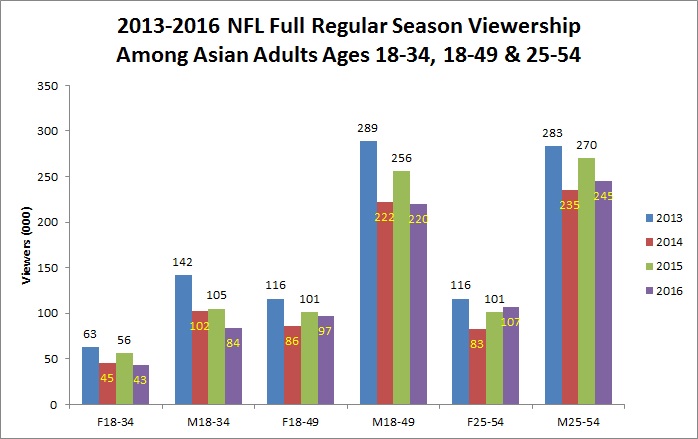 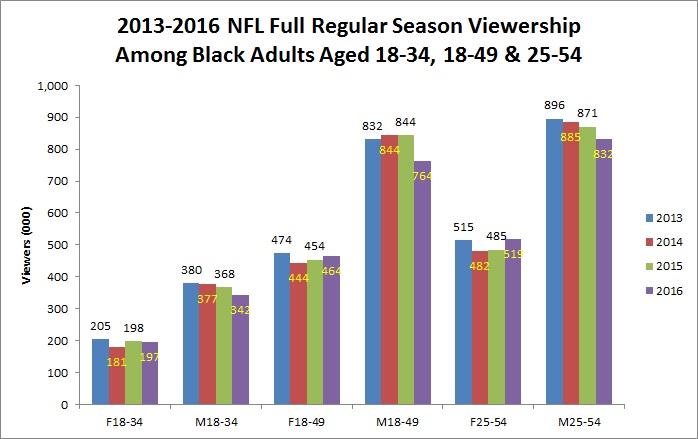 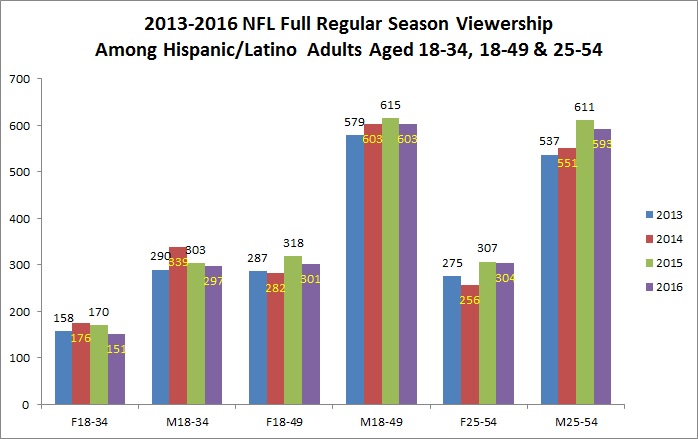 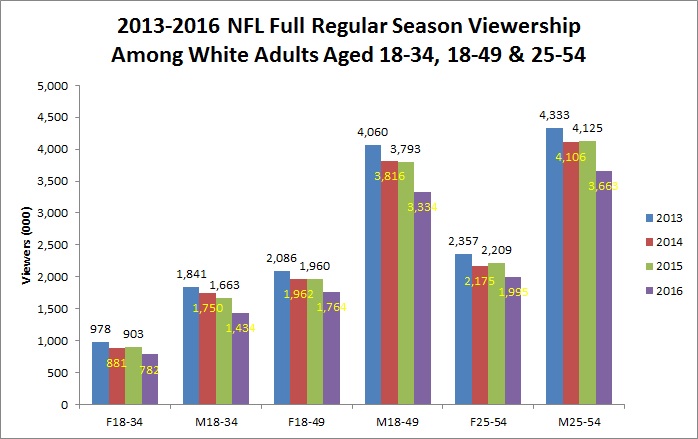 Now, it’s fair to wonder some things with the ratings among women. Could having (thankfully) fewer reports of domestic violence during the season have aided things along – the New York Giants’ mishandling of Josh Brown not withstanding? How much of it is due to the Cowboys – with arguably the biggest following in the league – being a true Super Bowl contender? The increased viewership among black women 25-54 doesn’t exactly make up for the steep declines among white women, mainly because the white population is far larger than every other group in the country. Also while older viewers, regardless of gender or race, watched more than they did in 2015, the declines among all women 18-34 and 18-49 still don’t bode well for the league as it continues to court their fandom, especially after seeing gains in those groups the year before.

Yet, as discussed in November, the alarms truly sounded for the NFL and its business partners because of their remarkably sharp declines with men. Among all male viewers, the league lost 9% versus a year ago with the average broadcast being watched by 11.07 million men versus 12.21 million in 2015. Asian men are a smaller percentage of the country, yet the drops are similar to 2014. The steady growth among Hispanic/Latino men has plateaued some with 2-3% declines in the key demos (and though unlisted, there was a 21% drop among teenagers). After somewhat holding steady over the previous two season, viewership among black males in the three key demos showed significant erosion – down 7% among black men 18-34, down 9% with those 18-49 and down 4% with black men aged 25-54.

The startling drops among white men in midseason largely remained into the rest of the season. Among all white men, the average broadcast seen just over one million fewer viewers, an 11% fall to 8.3 million in 2016 (9.3 million a year ago). While the slippage with every ethnic, gender and age group should have signaled some major problems, it makes some statistical sense that losing a million sets of eyes from the largest group of viewers (and citizens) would be why the NFL pulled its proverbial hair out.

Losing 9% of male viewers – 1.14 million men – in a single season cannot be underestimated or easily explained by a Presidential election, protests that were less of a narrative after September or the hypocritical-as-all-hell #BoycottNFL campaign from some Twitter users. (Where was that two years ago?) However, those can be added onto the greater offense in the eyes of many fans: frequent matchups of bad to mediocre football teams.

And to that point, perhaps those teams contributed to the regional shifts as well. 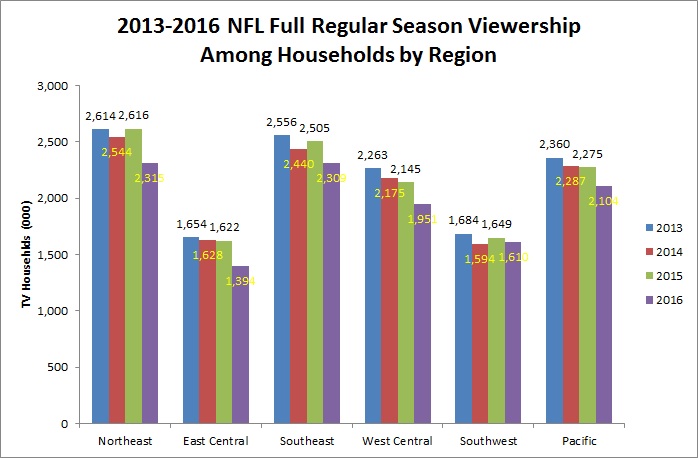 Parity has long been dead in the NFL, so with fewer truly strong teams – rather, fewer teams that could make things interesting – there shouldn’t be a huge shock to see a 6% slip in the Pacific, 7% in the Southeast or 8% in the West Central. For the Pacific, Seattle’s contention and the Oakland Raiders’ rise couldn’t help the awfulness of San Francisco, Los Angeles and San Diego. Both of last year’s Super Bowl teams not contending for the playoffs hurt the ratings in the Southeast (Carolina Panthers) and West Central (Denver Broncos) despite playoff teams in Atlanta and Miami.

Yet viewership in the Northeast, which has the largest population of the six Nielsen-measured regions, dropped by 12% from last season in spite of two playoff teams in the New England Patriots and New York Giants. The East Central, with a bad Chicago Bears team, the struggling Indianapolis Colts and lesser viewed AFC teams like Cincinnati and Cleveland, lost 13%. The Southwest, fortunately for the NFL, is essentially unchanged.

It’s very likely that the divisional round game between the Packers and Cowboys will approach records in its own right just as it did two years ago. Yet as in the regular season, the league has to hope and pray either team runs the table to help salvage their ratings cause towards Super Bowl LI. And even then, there’s no guarantee that either team’s success over the coming weeks will translate into the 2017 regular season. With ratings declines in college football and another draft class that may not capture the attention of NFL fans, unless some other teams can match the excitement that the ‘Boys and the Pack had, next season could potentially be just as challenging for… ahem, THE NATIONAL FOOTBALL LEAGUE.