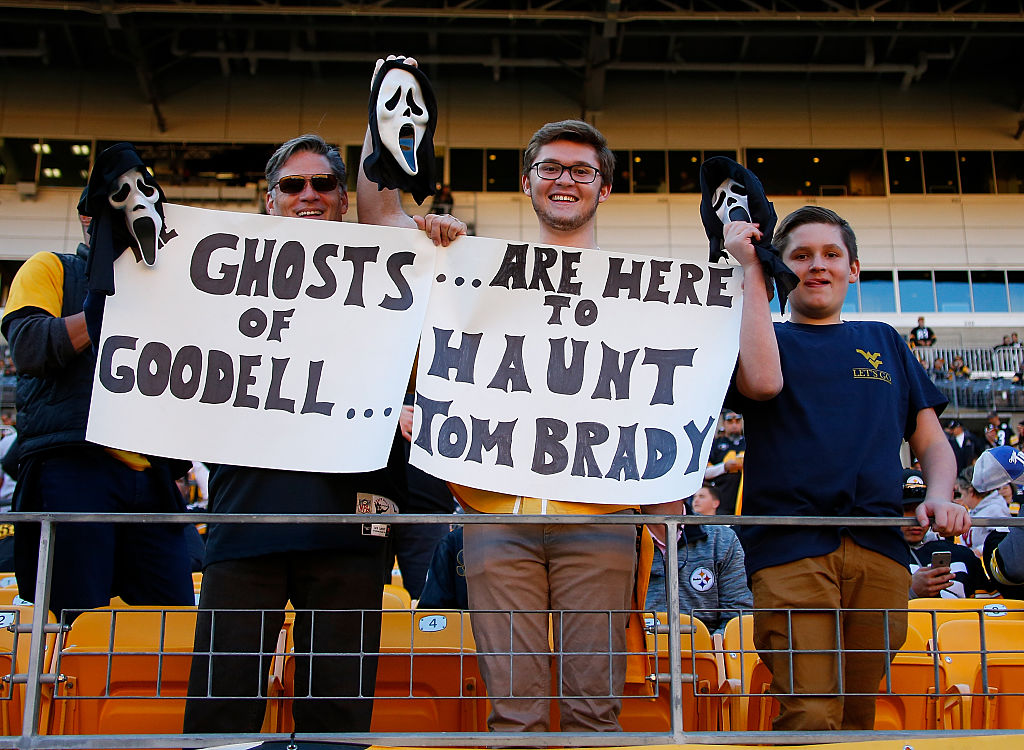 Of the non-stop chatter, theories, and think pieces regarding the NFL’s TV ratings struggles this season, very little has actually been said about who exactly decided to turn their football Sundays into errand-running, kid-chasing, significant other-pleasing, anything-but-the-NFL Sundays. Although there had been warning signs for some time now, it seemed as if prognosticators and industry insiders didn’t pay them any mind until the first two weeks of the season showed major declines versus the same time in 2015.

So while you have your own reasons for walking away from the NFL or very much sticking through these muddled times, here are some snapshots at where change is happening. (Hint: everywhere.)

It helps to once again look to the major demographics for network advertising sales, starting with the overall picture of viewership for the highly-coveted, but hard-to-keep adults aged 18-34 as well as the catch-all money demos of 18-49 and 25-54. Below is a look at the last four NFL seasons through eight weeks for CBS, FOX, NBC, and ESPN. The league-owned NFL Network was omitted due to its substantially lower viewership and distribution versus the other four networks, which foot the bill in terms of American broadcasting rights. 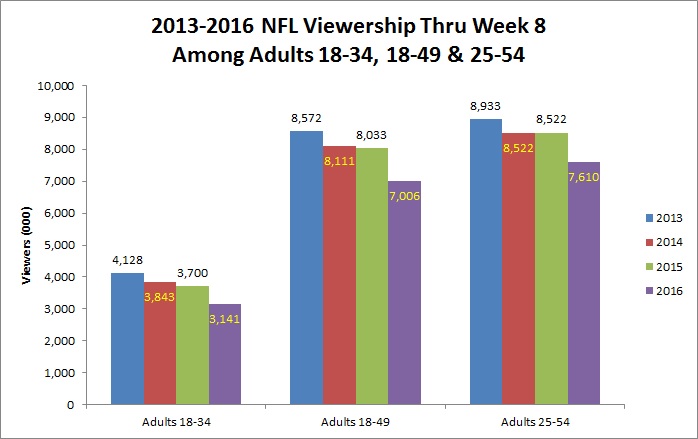 The gist of the chart is that viewership is down 15%, 13%, and 11%, respectively versus a season ago. With slight fluctuations, however, the ratings have slipped some since 2013, which very well may be the NFL’s peak season for television ratings. In fact, among the adults 18-34 group, current viewership versus the 2013 season is down 24% while also down 18% among adults 18-49 and 15% for adults 25-54. (Though not featured here, for those hanging on to the “election season” theory, percentages are similar when comparing 2016 to 2012.)

In other words, the league has been trending downward far longer than acknowledged.

Digging a bit deeper means that one has to consider the ethnic and gender makeup of the United States, which runs in contrast to a disproportionally black league with multiple white stars. From that, the data tells some fascinating stories.

As mentioned in early September, women have made a statement towards the NFL through their declining viewership, with the ongoing season proving to be no different. In fact, the drops are steeper versus than what took place two years ago when the sordid domestic violence stories colored the 2014 offseason. Compared to the same period last season, women ages 18-34 are down 15%, aged 18-49 are down 10%, and aged 25-54 are down 8%. In total, the league lost over a half million women (538,000) for an average game this season through the first eight weeks.

Yet, the reason why we are even discussing this in such a large scale is because men have begun to turn away in droves. While male viewership softened in the same calamitous 2014 season, it is far more pronounced this year, as men aged 18-34 are down 15%, aged 18-49 declined by 14% and aged 25-54 slipped by 12%. Worse yet, the NFL lost 1.5 million of its male audience in a year: the four measured networks had an average audience of 10.5 million viewers per game against 12 million in 2015.

The following charts display the viewership changes among ethnic groups, with female and male viewers for each age break shown to reflect shifts over the last four seasons through the halfway mark. 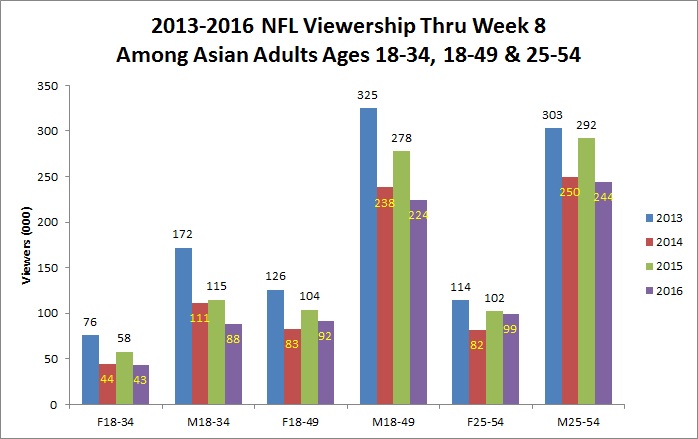 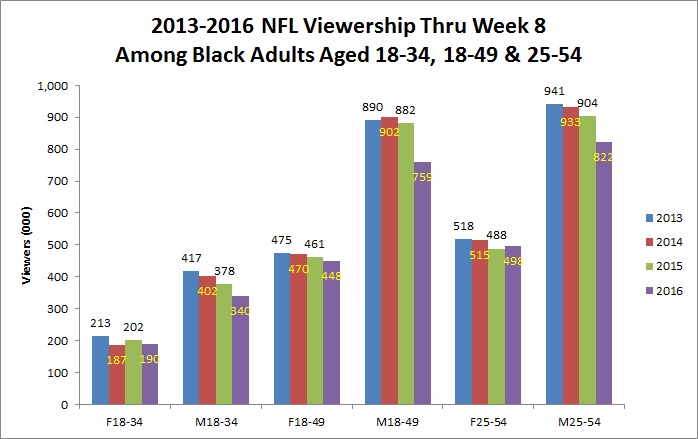 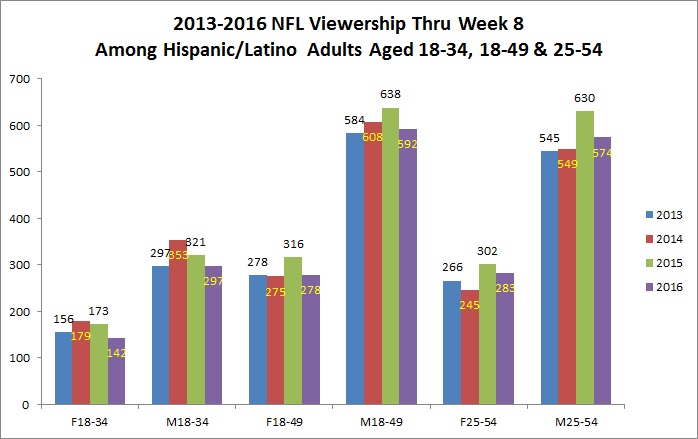 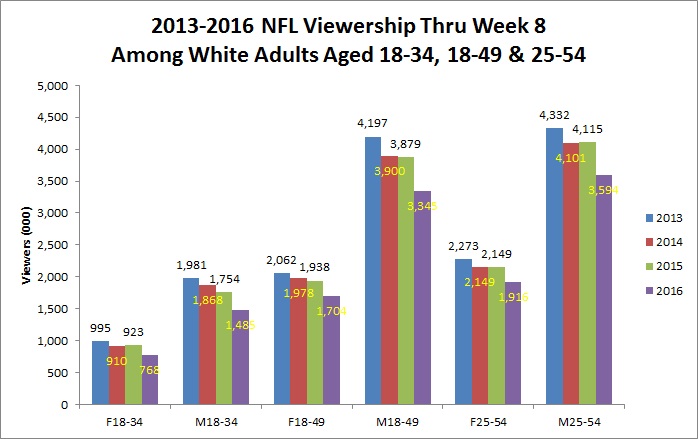 Three of the four ethnic groups listed had substantially decreased viewership across the age and gender breaks from the peak season of 2013: Asians, blacks and whites. Specifically, blacks and whites have had three straight regular seasons of declining or flat viewership (flat meaning very little change of 1-2%) while Asians, a smaller population in the US, have had wild swings over the same time period.

What’s most interesting are the single year drops among Hispanic/Latino NFL viewers. A major growth market for the league in recent years, viewership increased in 2015 with Latinos in the 18-49 (+8%) and 25-54 (+17%) age breaks, a counter from the other ethnicities at large. However, those gains have mostly been sapped away thus far in 2016, especially with Latino men, who slipped by 9% in the larger age breaks.

It’s easy to come to the same blunt conclusion that noted social justice activist and New York Daily News contributor Shaun King reached: that ratings have declined because conservative white men are racist, and have taken their ire out on the league for the existence of Colin Kaepernick. Yet, that theory ignores the fact that a two-minute pre-game moment – the singing of the national anthem – is normally not shown on television. It also ignores the fact that white Americans make up the majority of the country’s population and viewing audience, so any significant change in that group will gain the lion’s share of attention.

Oh, and regardless of ethnicity, gender or personal beliefs, it’s pretty difficult for anyone to deny how awful the product is at the moment.

Lest you think that this is just a problem from a gender or racial perspective as the NFL is a regional endeavor at heart, even though it still has tremendous national prominence. Broken down by regional territories – Northeast, East Central, the Southeast, West Central, the Southwest and Pacific – the decreases are startling no matter where you or your favorite team resides. 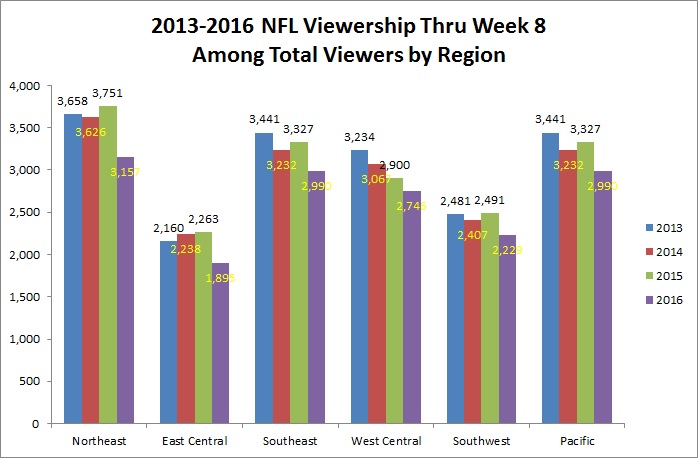 Now, in fairness, you can assume that this can be influenced by team performance so far, especially in the northeast corridor where only the New England Patriots and Dallas Cowboys (who are geographically mismatched in the NFC East) seem to be strong national draws. Among all viewers, NFL games have declined by 16% each in the Northeast and East Central regions, by 11% in the Southwest, by 10% each in the Pacific and Southeast, and by 5% in the West Central. There may be smaller declines in the West Central states thanks to the defending champion Denver Broncos and NFC North-leading Minnesota Vikings.

In all honesty, as much as losing approximately two million TV viewers hurts the NFL, it’s not as if the league will start shuttering franchises or shake up rosters like a struggling TV show would change cast members. We also have to consider that as the weather grows colder and the playoffs draw closer, more eyeballs become affixed to the NFL, increasing ratings for the full season. Beyond 2016, with the league’s ongoing youth movement, the on-field product will eventually improve as a new generation of elite talent emerges, especially at the glamour position of quarterback.

Yet, right now, the NFL has been subject to armchair quarterbacking of a different kind. In the likelihood that viewers continue to turn away from the game, expect more private hair-pulling and public semantics from Roger Goodell and the powers that be at the league office.

Jason Clinkscales is the senior editor of The Sports Fan Journal and a former media research analyst who worked for advertising agencies and several television networks. He is also a masochistic Knicks fan who thinks Carmelo Anthony is criminally underappreciated, even among other Knicks fans.