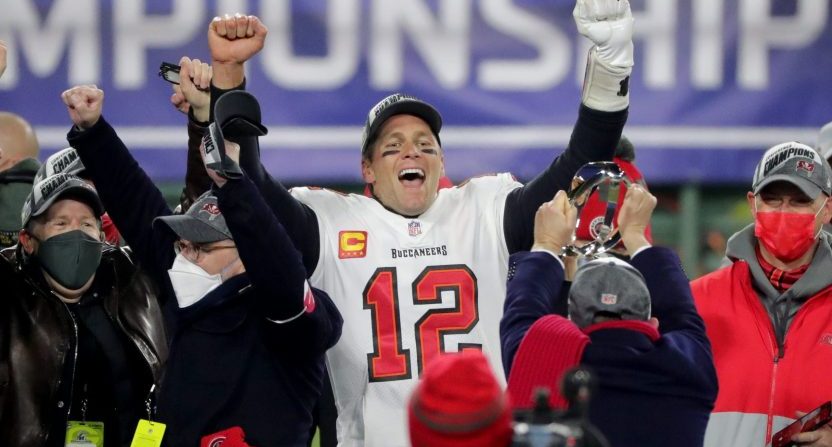 When the 2021 NFL primetime schedule was released last week, it was clear that the Kansas City Chiefs were going to be front and center in many of those games. But there was perhaps no game on the 2021 schedule that stood out more than the October 3 showdown between Tom Brady’s defending Super Bowl champion Tampa Bay Buccaneers and his former team, the New England Patriots.

The game has everything you could ask for in a rating juggernaut. The defending champions against the best franchise of the last 20 years. Tom Brady going head-to-head against Bill Belichick while Robert Kraft looks on. Brady returning to Gillette Stadium for the first time as an opponent. The unknown question of whether he’ll be cheered, booed, or both. You couldn’t ask for better angles for attracting a huge TV audience.

Naturally, every NFL TV partner was going to want that game. But while ESPN’s “Monday Night Football” and NFL Network’s “Thursday Night Football” had an outside shot, the game ultimately went to NBC and “Sunday Night Football.” The program’s executive producer, Fred Gaudelli, spoke with The Athletic’s Richard Deitsch about how that was, presumably, no accident.

While Gaudelli said he’d originally had his eye on Kansas City vs. Green Bay as his must-get match-up, he changed his mind as soon as the Super Bowl was decided.

“I told Mark and Pete that we really needed to make this our No. 1 game because it’s going to be the biggest story that week and transcend sports,” Gaudelli told Deitsch. “It’s a once-in-a-lifetime game. I mean, (Brady) can only play them the first time one time.”

While it might seem fairly set in stone that the league would want to put the game in the SNF timeslot, that’s not how it works. Every network partner lets the NFL know which games they’d love to have on their schedule and the league has to keep a lot of different entities happy when handing out these big opportunities.

So Gaudelli did what so many other businesses around the world might do in this situation. He made a PowerPoint deck.

“The slides showed what we could do to amplify it and give it even greater exposure,” Gaudelli said. “It wasn’t that formal a presentation. We had a two-pronged approach. I took Howard [Katz, the senior vice president of broadcasting and media operations for the NFL] through it and Pete took [executive vice president and chief operating officer of NFL Media] Hans Schroeder through it. And then they presented it to Roger [Goodell].”

Included in the pitch were NBC’s plans to surround the game with massive hype and coverage. Even so, he left the meeting unsure whether or not they’d get the marquee game, especially since the NFL had already gifted them with Brady and the Buccaneers in Week 1 against the Dallas Cowboys. It wasn’t until the day the primetime schedule was released that he found out.

Gaudelli was, to put it mildly, hyped. He told Deitsch that he thinks this could be the biggest game in SNF history since the very first one, the Manning Bowl, which was the first time Peyton and Eli Manning went head-to-head in the NFL.

Katz noted to The Athletic that “each of our network television partners made a legitimate case for landing the Tampa Bay-New England game.” The ultimate decision, per Katz, came down to the most obvious solution. That a game of this magnitude needed to be in a primetime window with no other games to compete against so the most people possible could watch it.

Truth be told, it’s hard to imagine that the NFL would have put this game anywhere else. “Sunday Night Football” offers the league its best showcase and ratings opportunity. The only real question is how many people will actually watch. That Manning Bowl broadcast netted 22.6 million viewers. Depending on how the Bucs vs. Pats go on October 3, it might very well surpass that. Given the rating dropoff that SNF dealt with last season, the possibilities must seem exciting.