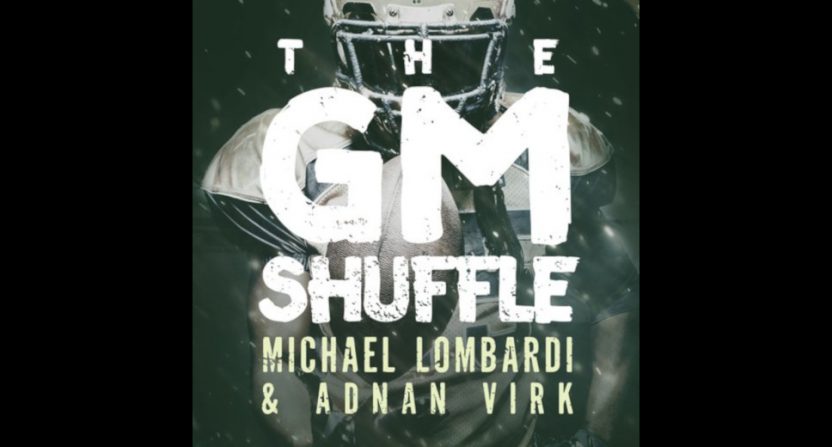 In addition to joining DAZN to host their ChangeUp MLB whip-around show, Adnan Virk is continuing in the podcasting space. Virk had previously hosted movie podcast Cinephile while with ESPN, and he’s now paired up with former NFL general manager/front-office executive/contributor to a variety of media outlets Michael Lombardi for a new weekly Cadence13 podcast called The GM Shuffle. (That’s an Apple Podcasts link; a non-Apple Player.fm link is here.) The podcast started two weeks ago with Lombardi and special guest Peter King, and  this week saw Virk (who’s going to be Lombardi’s regular co-host) join the show for the first time. Here’s a clip from it, featuring Lombardi and Virk discussing Lombardi’s belief that Mississippi State defensive tackle Jeffery Simmons is “the best player in the draft”:

Mike Lombardi: “Let me just be on record by saying this. I think [Jeffery] Simmons, the defensive tackle for Mississippi State, is the best player in the draft. Now that’s not counting character and everything else that goes along with it.”

Adnan Virk: “But let’s discuss that further. He had malicious mischief and simple assault [charges] back in 2016. Now, the athletic director at the time, they investigated and said ‘You know what? Whatever happened, it happened, we’re giving him a fresh start.’ At Mississippi State, first team all SEC, second team All American. Never had any issues off the field [at MS]. 163 tackles, 38 games in three seasons, was SEC Academic Honor Roll. Now, the downsides: he disappeared against Alabama. Little too reliant on the bull rush. But to your point, if you believe in talent and upside, okay, is there a character issue? Yes, but it was a few years ago. If you’re willing to say ‘He had a mistake, he owned up to it and he’s been great since then….’ But I’m with you that that guy’s a top 10 pick…”

Mike Lombardi: “And you just got to look past the injury and say, look, the ACL, it’s clean. It’s going to heal. We’re in a world now where ACL…[injuries]…come back quickly…I think this guy’s really a good player. He can take over a game. He’s one of the few players in this draft that you sit there and say, ‘That guy’s got a chance to go to the Pro Bowl. This draft is not loaded with Pro Bowl players. This draft is loaded with good players, so whoever you might pick at 10 you could pick at 40 conceivably and get the same player.”

That episode also sees discussion of a number of other draft topics, including the talk of the Arizona Cardinals selecting Kyler Murray #1 overall and what that could mean for Josh Rosen. Here’s a transcription of that.

Mike Lombardi: “Everybody that I talk to in the league thinks it’s happening. Now, they have not made any attempt to really trade [Josh] Rosen and…frankly, the more I think about this, they should just hold on to Rosen. Even if they want to take Murray, why sell Rosen at a discount? Why not wait until somebody gets hurt this summer and say, ‘Hey, you want a starting quarterback? Here’s Josh Rosen. We’ll give him to you for…”

Mike Lombardi: “Exactly. Sam Bradford went for a one late…and who would have thought that, really? Now I know Bradford had some really good seasons, but everybody tells me that that’s the case…[that’s]…what’s moving forward with the Cardinals.”

Mike Lombardi: “There’s two boards that that you look at on draft day…the…vertical board, which is the players at the position…and the…horizontal board, which is how…it relates to everybody else. So for example, if you like a left tackle, let’s say you like [Jonah] Williams and you graded him a first round grade of a 7.0 grade, let’s say, and you like a defensive lineman at a 7.0 grade. Well, you have to separate that. That’s the horizontal board. And…the horizontal board doesn’t separate just because [you’re thinking] ‘We need a tackle, we don’t need a guard.’ It doesn’t separate that way. It separates by who can be the better player. Because even though they both carry the same grade, somebody’s the better player.”

Adnan Virk: “And that’s that immortal question when it comes up…when you’re Michael Lombardi and you’re in there drafting…do you go ‘Hey guys, this guy’s way too big a talent. I know we’re strong at defensive end, but we’ve got to take this guy.’ Or, or do you draft by need?”

Mike Lombardi: “…most of the time we have this thing where teams are in such a situational value-based [situation]…where they say, ‘We’ve got to win next year. We’ve got to do it.’ [Look at] Tampa Bay… if you’re Jason Licht, you’ve got to win next year because even though Bruce Arians just came in, if Bruce doesn’t win, they’re going to blame you. You’re gone. So he’s going to forget about what holes are in his positions, and he’s not even concerning himself with the horizontal board. He’s only looking [at the] vertical board.”

Adnan Virk: “Exactly…give me the talent.”

Mike Lombardi: “Just give me the vertical board. Whereas the good general managers in the league have to look at the…[horizontal]…board, and that’s what the last month of the season of the draft preparation is all about. The…horizontal board. What player fits and how do I do it? And we’ve done this numerous times in careers. I mean, you know, you’re sitting there in the draft. You take David Johnson or you take a strong safety, what do you do? Even though you have the same grade on them, they’re not the same player. You know? And then after…they come out and say, ‘Well, how did you have them graded?’… ‘Well, we liked them both equally, but we took the player we needed.’”

From this episode, this sounds like it could be an interesting podcast for NFL fans looking to dive deeper into front office thinking. Lombardi has worked in plenty of different NFL front offices over the years, and Virk is an experienced and skillful interviewer with an ability to get interesting responses from whoever he’s talking to. We’ll see where it goes from here.

[The GM Shuffle on Apple Podcasts]