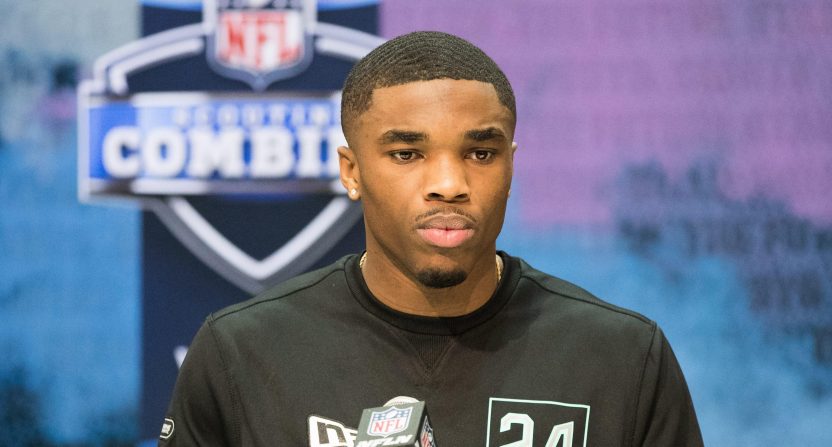 Former Ohio State defensive back Jeff Okudah came into this week’s NFL Combine looking to make good on the hype surrounding him as the top defensive prospect in the 2020 class.

With a 4.48-second 40-yard dash and 41-inch vertical leap, the defensive back took care of business on the field. Then, during a press conference, Okudah showcased his professionalism and ability to weather tough questions as well.

Jeff Okudah had the perfect response when someone questioned his technique ? @jeffokudah @OhioStateFB

“Sometimes you have a tendency to get kind of sloppy. How are you looking to kind of improve that?” asked the reporter. Without missing a beat, Okudah challenged the notion of the question, asking “sloppy in what way?” “Sloppy, like, penalties and stuff like that,” the reporter responded. Again, Okudah pushed back calmly, noting “I had zero pass interferences, zero holdings, so cut the tape on again. I think you might see something else.”

The moment itself was a great example of a young player showcasing his ability to handle tough media moments but the oddness of the question itself sparked a curiosity in who had asked it to begin with. That reporter, Pranav Rama, who was covering the combine on behalf of sports blog The Scorecrow, revealed himself shortly thereafter.

So apparently I was trending yesterday because of how I pressed @jeffokudah. It may be just be a play or two but those plays are the difference between a SuperBowl and a couch sitting at home. It's our job to ask the tough questions whether the general people like it or not. https://t.co/RoXIOJULkI

When pressed about how he came to the conclusion that Okudah’s play is sloppy, Rama doubled-down by saying that while he might not have been called for penalties, there were still many occasions where his play met the criteria.

It's on the tape and I put it on my Twitter. I'm a grown ass man not gonna sit and cry about it. Yeah zero pass interferences and holding but how many were missed by refs. Also if he wasnt sloppy he wouldn't have injured himself in meaningless drill.

That’s certainly one way to think about it.

While the drama might have died down in most corners, apparently the incident was causing plenty of consternation in Rama’s. So, on Friday, he tweeted that he was leaving the site following the controversy.

I have seen the ugly parts of the sports business so I have decided to leave @TheScorecrow. I will be putting my talents somewhere else. I want to thank Johnnie for the chance he took upon me. I also want to thank @GAPeachPolymer and @MikeSports22 for helping me reach the next

Level. Those who want to contact me from there can still do. I just cant work in an environment with no respect.

However, The Scorecrow followed up that announcement with an announcement of their own, that Rama had actually been fired due to not only the question but his subsequent doubling-down.

Official Statement: We have let @PranavRama1 go from our site. His error in judgment and lack of research involving @jeffokudah at the Combine was inexcusable. We understand that people make mistakes, but Pranav not only embarrassed himself and us, he also doubled down.

Instead of apologizing for the lack of preparation and moving on, he made the situation worse. It was unprofessional and does not reflect our values here at The Scorecrow. We strive to be accurate and give intelligent analysis in our sports coverage.

Again, we apologize to Jeff Okudah along with our fans and readers. We will continue to bring you top-notch sports analysis, Fantasy articles, and DFS advice on a daily basis. We appreciate all of our followers and readers. Thank you.

That’s a whole lot of drama for a sports blog you’ve probably never heard of until now. And while it might seem silly to point it out, the incident is a good reminder that if you’re going to play in the adult pool, any media company needs to have the right people in the room, whether it’s ESPN or a small sports blog. Your reputation is on the line with every question as well as any situation that your representatives are involved with. And when things go wrong, you end up with a Maven Conundrum.

Jeff Okudah made sure to get the final word on the matter.