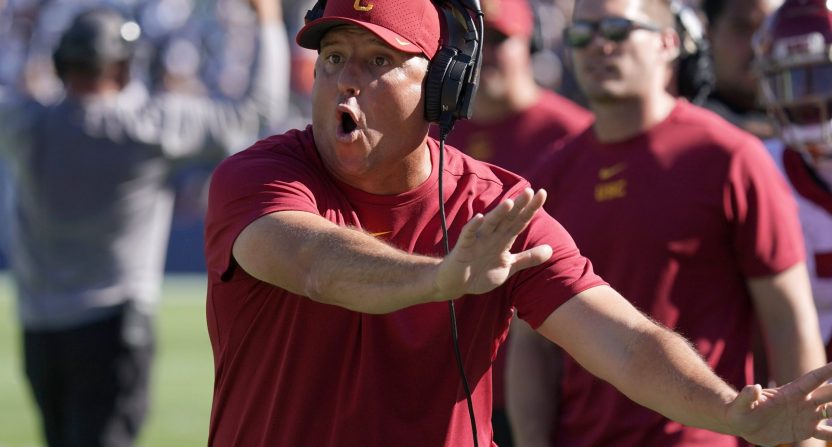 In October, Sports Illustrated’s new owners TheMaven laid off roughly half of its staff as part of an effort to remake the legacy sports brand and media outlet into a more streamlined online content generator. While the company did bring on some notable journalist names like Pat Forde, the bulk of the staff was expected to be local contractors and low-paid writers who would churn out content consistently.

Understandably, concerns about editorial integrity and tarnishing the reputation of the SI brand were on the minds of a lot of longtime readers. Could Sports Illustrated remain a trusted source for sports news or would it become just another sports content aggregator in an already overly crowded marketplace?

We may have gotten a preview of things to come on Sunday when SI’s USC Maven Adam Maya reported the school had fired head football coach Clay Helton after four seasons. Maya says multiple sources had confirmed the news, though also noting that “a school spokesman said on Sunday afternoon that a decision on Helton has not been made.”

On its face, most college football fans didn’t blink too hard at the news. Helton has been on the hot seat all season and the fact that the Trojans failed to make it to the Pac-12 Championship Game seemed to be enough for a former powerhouse like Southern Cal to ax Helton and set their sights on big fish like Urban Meyer.

However, things got weird in the early afternoon when Sports Illustrated posted a staff report claiming that “multiple sources are disputing the report that Clay Helton is being fired as head coach at USC.” That post was based on the reporting of their own Pat Forde.

Multiple sources dispute the report that Clay Helton is being fired at USC. Sources tell me no decision has been made and it is still possible — maybe even likely — that Helton keeps his job.

Forde said that no decision has yet to be made on Clay Helton’s future and it was still entirely possible that Helton keeps his job. That was backed up by Forde’s former Yahoo! Sports colleague Pete Thamel, The Athletic’s Bruce Feldman, and CBS Sports’ Dennis Dodd.

#USC source on that Clay Helton report: "The only one who's probably getting fired today is (the guy who reported that).” https://t.co/40UDAdQEeY

One high ranking USC official terms Clay Helton report “ridiculous.” Doesn’t mean it can’t happen at some point. But nothing in the works at the moment.

This is exactly the kind of scenario people were afraid of when TheMaven announced their plans for the brand. Now, it may still end up that Helton is fired by USC (though it seems less likely given what the Feldman and Thamel have said). But regardless, the initial report appears to have created a media firestorm that Sports Illustrated itself had to try to extinguish. It immediately throws cold water on any attempt by SI’s Maven system to establish itself as legitimate and only reaffirms the fear that it’s a collection of “bloggers living in their mother’s basement” who need to be overseen by adults. Not to mention the way this could affect how schools and pro franchises interact with Sports Illustrated Mavens (and reporters) moving forward.

We will have to see how it all plays out but right now it doesn’t sound promising for the initial report. Maya has yet to update the initial article so he may be sticking to his sources until otherwise noted.